Autonomous delivery vehicle maker Nuro is cutting 20% of its staff 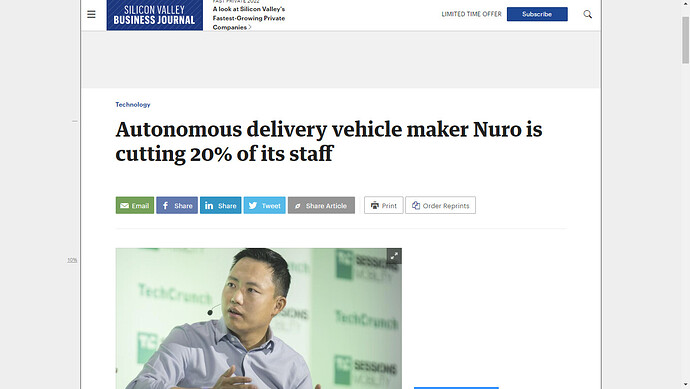 The latest cuts come about a year after the autonomous vehicle maker raised $600 million in a Series D round. The company has raised more than $2 billion total, according to PitchBook Data. In March, the company doubled the size of its Mountain View office.

Nuro has developed driverless, purpose-built on-road delivery vehicles. It’s signed deals with numerous companies to deliver groceries, food and other other goods on their behalf. In September, for example, it announced a deal with Uber Technologies Inc. Under that agreement, Nuro’s vehicles were slated to make food deliveries in Mountain View and Houston for Uber Eats beginning this fall.

The company continues to make progress with its technology and, despite the cuts, plans to press forward, Zhu and Ferguson said in their post. Nuro has $1 billion on its balance sheet, and its autonomous vehicles are driving more miles than they did last year, the founders said.