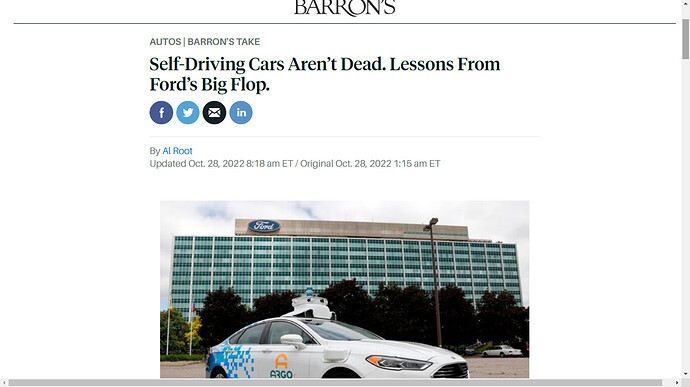 The failure of Argo, however, doesn’t signal the end of autonomous vehicle development, or rule out the eventual arrival of self-driving cars—far from it. But there are important lessons that investors can take away from Ford’s very expensive mistake.

Ford’s bitter experience is only the latest example of big problems in the world of autonomous-vehicle development. Another involves lidar start-ups. A third has been reflected in repeated delays in coming up with a true self-driving system at electric-vehicle pioneer Tesla (TSLA). Indeed, the amounts that the start-ups and [Tesla](archive.ph have spent on the technology are even more astounding.

Lidar is, essentially, laser-based radar—eyes for a car that can see a long distance away and through fog, rain, snow, and the like. In the past couple of years, six lidar companies have merged with special purpose acquisition companies, including Luminar Technologies (LAZR).

3 F +2.00% [Yahoo Finance Video] Ford to end its autonomous vehicle division Thu, October 27, 2022 at 11:43 AM Yahoo Finance’s Pras Subramanian breaks down Ford’s decision to disband its Argo AI unit. JOHN LAWLER: We saw that the arc to a scaled, profitable business was a long way off-- five years plus out-- and so what we’ve decided is that we’re going to reallocate our capital, we’re going to focus on L2 + and L3 Driver Assistance Technologies where we can give our consumers time bac…

https://www.bloomberg.com/news/features/2022-10-06/even-after-100-billion-self-driving-cars-are-going-nowhere Maybe a couple excerpts? “ They were supposed to be the future. But prominent detractors—including Anthony Levandowski, who pioneered the industry—are getting louder as the losses get bigger.” And “ It all sounds great until you encounter an actual robo-taxi in the wild. Which is rare: Six years after companies started offering rides in what they’ve called autonomous cars and almost …

Self driving cars has its problems but self driving trucks still look promising. Especially for long distance trips on the Interstate highways.

The Bloomberg article notes that one successful use so far is running them rock trucks at mining sites. Same road. No distractions. Same origination point. Same destination point. Trucks need to be retrofit, of course.

Gonna be hard to make back that $100B investment with that, I’ll say.

The crashes with self driving autos make that risky. Too many variables. But trucks on the interstate seems more practical. I think they are running in Arizona.

Its a developing technology. Won’t happen overnight but still attractive.

Indeed, the amounts that the start-ups and [Tesla](archive.ph have spent on the technology are even more astounding.

Lots of entities have spent a ton of money on autonomy for almost no return. However Tesla has spent very little. And they’re way ahead of anybody else so far as solving the problem goes. As I’ve argued elsewhere, there’s no real telling how far away they are from true autonomy, but there’s no doubt that they’ve delivered real value with what they have already. I drive it every day (at least when I have somewhere I want to drive) and it reduces the burdens of driving and makes driving safer in many situations.

All that’s been fairly well demonstrated so far is that Musk was completely right when he said that lidar was a dumb approach, leading quickly to a local maximum from which there is no way forward, and that Musk was completely wrong when he said that autonomy is a solved problem and Teslas would be able to drive themselves coast to coast by the end of 2017. And then wrong again and again every time he’s said “this year” or “next year”. Soon he’ll be wrong again about the end of this year. But at least Tesla’s FSD keeps getting better. 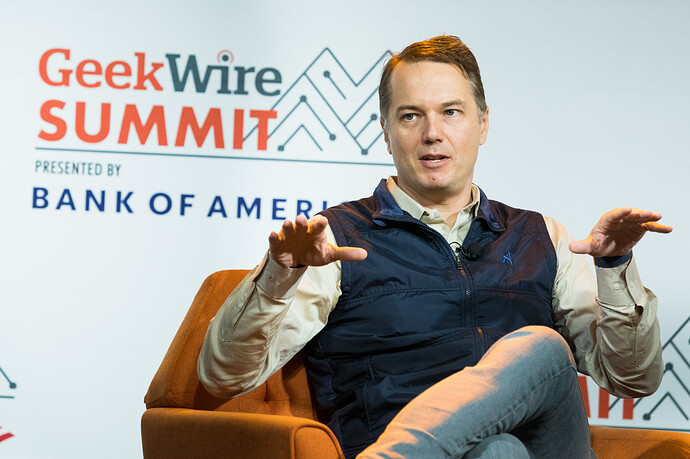 The road ahead for autonomous vehicles: Aurora CEO Chris Urmson on the future...

Fully autonomous vehicles are closer to commonplace than you might expect, according to Aurora CEO Chris Urmson.

Current state of operations: Today we have trucks on the road in Texas pulling loads for customers every day, with people on board, with operators on board. … The vast majority of the time, it’s driving itself. And it’s doing this on the freeway. And it is a very smooth, capable driver at this point. It does the things that you’d want other drivers to do. So if it sees vehicles trying to merge … it will make space and move over. When it sees a vehicle stuck on the side of the road, it’ll slow down, it’ll make space, and do all the things that a good conscientious driver would do.

Why start with big rigs? For a bunch of reasons:

There’s just an incredible need for this technology in the U.S. We’re short 80,000 drivers today; we expect to be short 160,000 drivers by the end of the decade. It is one of the contributing factors to the supply chain challenge.

Safety is profoundly important. There are about a half-million heavy truck accidents per year. That’s something we can do something about.

When we look at the opportunity to build the business and scale it, unit economics are stronger. Said simply, we pay truck drivers three times as much as we pay ride-hailing drivers. And so if you think about introducing a technology, that makes it easier to start to scale the business and then move into other spaces.

Except when it’s raining. Or snowing. Or sleeting. Or foggy. Or with road construction. Or woozy car drivers. Or …

It seems it might have to be something like air traffic, where you need to know the weather at takeoff, along the route, and at the destination before you can give the green light.

Oh yeah. Or in the dark. Or any combination thereof.

Its easy to program a self driving truck to pull over and wait for help when encountering a situation not in its program. I doubt that most weather would require that but the unplanned can happen.

Railroads send out replacement crews by cab all the time when crews run out of time usually due to traffic stalled by accidents etc. Self driving trucks can do that too.