Bloomberg: If Putin Orders a Nuke, Will His Generals Obey? 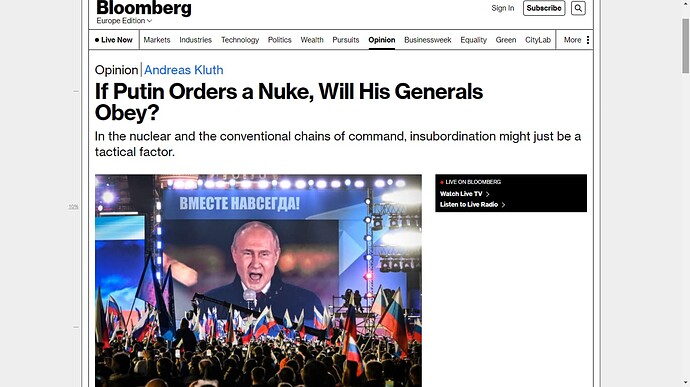 As military strategists in the West war-game a possible nuclear escalation by Russian President Vladimir Putin, they’re also pondering the role disobedience could play. What if Putin gives the order to nuke, but others in the chain of command refuse to execute? Should the US and its allies try to sway those individuals now?

Scenarios in which insubordination — from conscientious objection to outright mutiny — come into play aren’t far-fetched. If Putin were to escalate, he’d do it with so-called tactical warheads. These are currently in storage and would first have to be transported to launch bases and mounted on missiles. Dozens of officers would have to sign off and relay the order, knowing that Western spy agencies would be watching them at every step.

We can assume that many of these officers will have qualms. They may privately oppose Putin’s war against Ukraine. They may not want to be complicit in mass murder. They may fear an uncontrolled escalation leading to Armageddon. Or they may simply be aware that one option for US President Joe Biden is to answer a Russian nuke with a conventional military strike that wipes out the base that fired the missile. Executing a launch order could well be suicidal.