Pahhlleeezzze Warren…please buy Tesla! The growth will be linear and forever! Elon will dominate all business in America…just trust us here on the “Berkshire” forum to guide you to eternity! We ARE the experts. Tesla is a screaming bargain!

Nah. Charlie is disconnected from reality. TSLA cannot be part of Berkshire holdings. You have a mercurial CEO, highly competitive industry, the first mover advantage on EV is eroding fast. Why TSLA, why now?

I mostly agree with this. BUT if WEB/Charlie/Abel at some point decided that they ought to own something in the auto space, specifically the EV auto space which is expected to grow leaps and bounds for a few decades, which companies do you think they should consider?

(also, Musk won’t be there forever, he’ll probably get bored and start something new someday [soon].)

There may be another reason why they might rule out Tesla. That’s because Tesla is attempting to be very vertically integrated. Sure, right now, it helps them dramatically regarding costs and supply chain, but usually extreme vertical integration ends up bogging down a company. Maybe this could be an exception, but they may not want to bet on it.

Tesla has a terrific brand, no doubt about it. World class, I would have to say. But it’s in a nascent industry, and possibly without durable competitive moats, so it remains to be seen how long that halo lasts.

Apple, perhaps some people think as co-equal in the “brand” category, is one of only two systems of smart phones, a product in consumers hands for 25 years, and the OS makes it unlikely there will be a third anytime soon. (Several have tried, although watch out for China & India.)

Coke, another fabulous brand, has more than that: they have a distribution system the ensures bright, cheery product placement well, everywhere, and a means by which to introduce new products and new lines. (See Frito-Lay for a comparable distribution play.)

Tesla has a lot of things going for it, certainly, but longevity isn’t one of them, and there is a ton of competition now gunning for that segment of the market. That doesn’t mean Tesla won’t do OK, it probably will (and yes, does have things like battery supply chains other are only now building) but the others have resources too, and CEO’s who are not prone to going off on other speculative projects with ADHD or whatever his problem is.

Warren bought Coke decades after it was established in the world psyche, and Apple 40 years after the company was founded and a decade after the first iPhone demonstrated the OS moat. I would be surprised to see a Tesla investment at this point of the game.

If anyone thinks Berkshire would invest in a company that sells for 50x earnings, had a negative ROE up until 2020 and has a CEO who receives a $55 Billion (Yeah that’s Billion with a B) pay package you might not understand Berkshire all that well…Charlie said they have done some good things for humanity and their success is a minor miracle. He never said he wants to own it.

Elon himself has said that without the self-driving technology, Tesla would be worth nothing. Given so many big techs working on this technology with much stronger AI teams, there is no evidence so far that Tesla would win at the end.

That’s really kind of funny. Because there are NO self-driving vehicles sold to customers on the road today. Not a single one. Not Tesla, not any manufacturer.

It’s also a non-sensical statement overall. The value of a business, of ANY business, is the sum of the discounted cash flows out to eternity*1. An ongoing auto company, that produces profit, has some value. It may have less value that an auto company with self-driving vehicles, but it still has some value. Now, if an industry (let’s say human driven autos) is made obsolete by a new technology or new paradigm (let’s say self-driving cars almost entirely on a subscription basis), then AT THAT POINT, the value of the old business will decline, eventually to zero.

*1 The trading value, perhaps on a stock exchange, of any business is the average of the estimates of the sums of all the discounted cash flows out to eternity by each participant in that market at a given time. That’s why share prices fluctuate … because at any given time, the average of all the people taking part in this valuation exercise change their outlook. 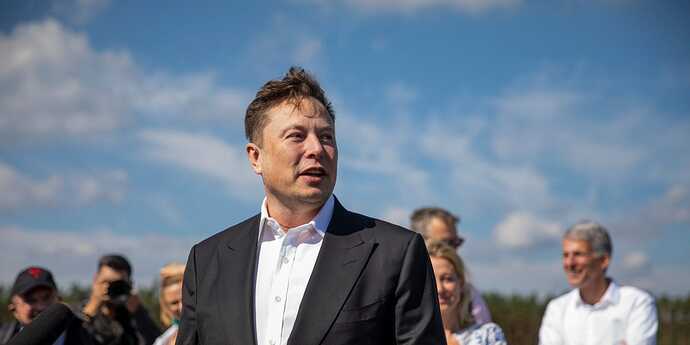 Elon Musk says the difference between Tesla being 'worth a lot of money or...

Elon Musk has been promising to develop self-driving cars since 2015, when he first predicted the tech would be ready in three years.

“I skated to where the puck was going to be, not where it was.”

Always underestimate someone who rose through the ranks of a huge OEM.

Or so it seems to me!

May be Tesla is so far ahead of the curve and can sustain that lead for many more years to come. From my limited, biased view, I think traditional car manufacturers may catch up with Tesla in 3 to 5 years and by then Tesla’s premium pricing will go away. Of course Apple has successfully demonstrated you can have premium pricing for similar features by creating an ecosystem. Like @Goofyhoofy Warren is not going to be in any hurry and will rather wait for Tesla to succeed before making an investment.

OK - Just for giggles, I did some math on this. I realize that Musk’s “pay package” is not just wages, and most likely includes stock, stock options, benefits, etc. but just think of this in terms of how we “little people” might think of this $55B annual compensation.

That’s crazy when looking at it in real people’s terms.
'38Packard

“Musk is skating to where the puck will be…”

Where will the puck be?..
On Twitter tweeting some BS?

You seems to think Tesla is the only EV manufacturer out there. BYD already surpassed Tesla in EV car sale in China, the world’s largest EV market.

OK - Just for giggles, I did some math on this. I realize that Musk’s “pay package” is not just wages, and most likely includes stock, stock options, benefits, etc. but just think

1 The trading value, perhaps on a stock exchange, of any business is the average of the estimates of the sums of all the discounted cash flows out to eternity by each participant in that market at a given time.

I know I’m comparing apples and oranges here, but at $55,000,000,000 [edited to correct] compensation, it would appear that most of the future discounted cash flows have already been extracted, and you didn’t get it.

There you go - fixed it for ya.

I have a hard time believing that Tesla’s halo survives the man-child’s purchase of twitter. The car’s success has been built on signalling. The number of people who’ll want to signal an association with Elon Musk very likely drops with every tweet.

This isn’t the Apple or Coke route to long term success, or anything close. Maybe you can compare Bezos’ purchase of the Washington Post, but Bezos also isn’t out there writing shitpost op eds on every second page of the Sunday edition.

i own a tesla, and think electric cars are the way to go. I have seen more and more audi q4 etrons on the road around here (switzerland). starting to out number the model Y. I will likely be buying the q4 next week as well for my wife as she prefers it over the Model Y and having owned a tesla, their initial advantage which is range and charging network is gone

even if 55 bil reasonable for full time work, he only has a part time job at tesla
he has two others

And I get the idea of only looking at the sticker price when buying a new car. That is a long held mental habit that we all have.

But consider fueling your vehicle from a regulated utility and then compare your costs of ownership over say, 5 years?

Then compare the initial cost of the cars and say fueling and maintaining them for a fixed number of miles.

If you use us as an example, we now have 120,000 miles on our 2017 X. If you reduce that to 100,000 for ease of arithmetic, and factor in that by charging at home, our electric bill increased by an average of $600 per year, then that is saying something. (BTW, there is a caveat. Because we were among the earliest adopters, all of our Supercharging visits were free.)

Even if we had paid for Supercharging, the costs would have been much lower than the costs of an internal combustion car.

While you personally may not wish to buy an electric car, be careful not to think that your own preferences are the same as others.

I have a 250 mile range EV. It’s practical and fun to drive. We have 29k miles on it in 18 months. It has cost zero in maintenance costs. I’d buy another.

Teslas are a luxury vehicle. Can they make a car like mine profitably? If they do I’ll buy one.

The car’s success has been built on signalling.

I strongly disagree. Tesla’s success has been built on them offering far and away the best electric cars out there, which generally compare favorably in most ways to the gas powered competition. When the Model S came out, it ‘broke’ Consumer Reports’ rating system, getting a score over 100 on a ranking system that was supposed to top out at 100. The success has carried on from there, wowing owners with an awesome driving experience and performance, with low cost of ownership compared to the sport-luxury competition.

Sure the competition is coming on strong, but Tesla is hardly standing still.

I’m sure they’ll lose some sales over Elon’s increasingly ridiculous public persona and hard right political turn, but most people are buying Tesla’s because they want a Tesla to drive, not caring too much who the CEO is.