Excited to share an article on Aehr Test Systems which recently received orders worth over $4 million from its lead silicon carbide test and burn-in customer for multiple WaferPak™ full wafer Contactors.

“We are excited to receive these follow-on orders for a significant number of WaferPaks to be used with previously shipped FOX-XP systems for high volume production of MOSFETS used in electric vehicle inverters and onboard chargers. This customer is a leading Fortune 500 supplier of semiconductor devices with a significant customer base in the automotive semiconductor market, and has publicly announced that they expect their growth rate to accelerate faster than previously forecasted. We are excited to participate in their ramp and meet their quality, reliability and capacity needs, and they continue to forecast orders for a significant number of FOX systems and WaferPak Contactors during this fiscal year and well into the future.”

These WaferPak Contactors are expected to ship by the end of Aehr’s fiscal third quarter ending February 28, 2023.

Strengths
With 40+ years of innovation and expertise and 50 issued patents and more in the pipeline, Aehr Test Systems is a recognized innovator and leader in their industry.

The Company is currently engaged or in discussions with almost all the existing and future silicon carbide suppliers regarding their unique, low cost, multi-wafer level test and burn-in solution that provides test electronics and device contactor technology that enables contact to 100% of devices on a single wafer. This allows customers to burn-in every device at a lower cost than they could in any other form due to the ability to contact thousands of devices on a single wafer and test 18 wafers in a single system at one time with the FOX-XP™ multi-wafer test and burn-in system and proprietary FOX full wafer contact WaferPaks™.

Additionally, the major silicon carbide companies expect that most electric vehicle traction inverters will move to multi-chip modules, and they must move to wafer-level stress and burn-in to remove the inherent failures before they put these devices into multi-die modules to meet their cost, yield, and reliability goals of these modules. Aehr’s technology provides a total turnkey single vendor solution to meet these customers’ critical test and stress requirements.

Currently, Aehr is developing enhancements to their packaged parts and wafer level burn-in products, intended to improve the capability and performance for testing and burn-in of future generation devices and provide the flexibility in a wide variety of applications. It expects to continue to allocate significant resources to research efforts in the future as well.

Opportunities
The silicon carbide market for electric vehicles and its supporting infrastructure requirements are growing at a tremendous rate, with Canaccord Genuity estimating that wafer capacity will increase from 125,000 6-inch wafers in 2021 to over four million 6-inch equivalent wafers in 2030 to meet the electric vehicle market alone.

So, it is expected that demand will increase for wafer level burn-in of silicon carbide devices and specifically for traction inverters and onboard and offboard chargers for electric vehicles. Aehr Test Systems seems fully poised and well-equipped to benefit from this upcoming opportunity.

During the last few months, multiple silicon carbide suppliers have asked the Company to provide technical feasibility, quotations, and schedules for production test and burn-in of their wafers. While some of these companies want to do on-wafer validation of the solutions before they place orders for systems, others are planning to move directly to purchasing FOX systems and WaferPaks to accelerate their time to market.

Other than their engagements with some of the top major automotive suppliers, the Company is also witnessing high levels of interest and discussion with other silicon carbide prospects across the spectrum of industrial, solar, wind, and charging infrastructure markets. Therefore, they are hopeful about expanding their potential customer base and increasing their growth prospects for fiscal 2024 and beyond.

Threats
The semiconductor equipment industry is intensely competitive. Significant competitive factors in the semiconductor equipment market include price, technical capabilities, quality, flexibility, automation, cost of ownership, reliability, throughput, product availability and customer service. In each of the markets it serves, the Company faces competition from established competitors and potential new entrants, many of which have greater financial, engineering, manufacturing and marketing resources than the Company.

Approximately 90%, 68%, and 39% of Aehr’s net sales for fiscal 2022, 2021 and 2020, respectively, were attributable to sales to customers for delivery outside of the United States. The Company operates sales and service in Taiwan, a service organization in Germany and Philippines, as well as direct support through third party agreements in China and South Korea. Moreover, the Company purchases materials from suppliers worldwide.

Therefore, global economic uncertainty and financial market volatility caused by political instability, changes in international trade relationships and conflicts, such as the conflict between Russia and Ukraine and the political climate in China and Taiwan may result in limited access to these markets for sales and material purchases.

Given that a substantial portion of Aehr’s net sales is from sales of products for delivery outside the United States, an increase in the value of the U.S. Dollar relative to foreign currencies would increase the cost of their products compared to products sold by local companies in such markets. In addition, since the price is determined at the time a purchase order is accepted, the Company is exposed to the risks of fluctuations in the U.S. Dollar exchange rate during the lengthy period from the date a purchase order is received until payment is made.

Disclosure: I/we have no positions in any stocks mentioned, and no plans to initiate any positions within the next 72 hours. 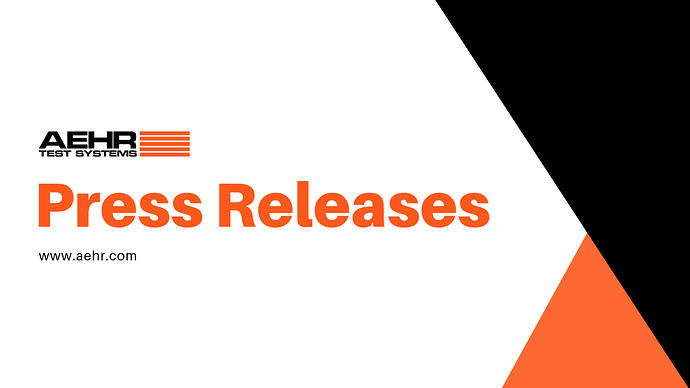 Aehr Receives Over $4 Million in Orders for its FOX WaferPak™ Full Wafer... 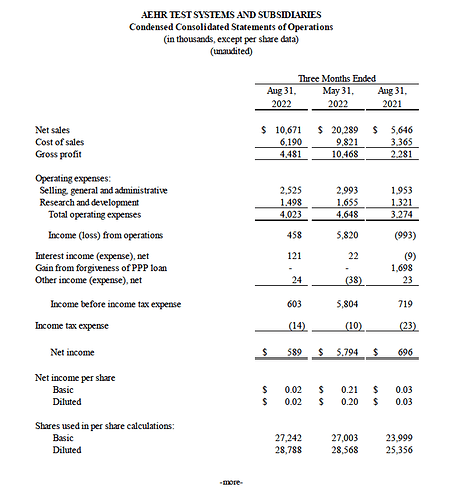 What does this have to do with Tesla?

Tesla uses Silicon Carbide semiconductors. Aehr produces a proprietary Silicon carbide test system to burn the chips in so there will be fewer failures. Very important for reliability in EV cars. Tesla produces EV cars, hence that is what Aehr has to do with Tesla.

Does posting the whole article violate any rules, or are there no rules anymore?

Does posting the whole article violate any rules

Yes, it violates the rules here, as well as violating copyright laws.