Florida gets hit again with a Hurricane

Ok Florida has been hit numerous times by Hurricanes. Since Hurricane Andrew the Government has spent 213 billion to rebuild back Florida. This is not just a problem with Florida but all up the east coast. The people still want to live on the coast, I get it, when it’s nice there it’s great. But when it’s bad, it’s terrible. But the reason I bring this up is because when a state get’s hit with a calamity, Hurricane, Tornado, FIres, Floods. They all, everyone of them, comes to the Government, to get money, as they should. That is one of the reasons we have a Government. That is “one” of their essential jobs.

But the problem I have is that when each and every one of these states does not get hit, “some”, of these fiscally sound representatives of this Government come out and refuse to help other states. But when their state gets hit they are there hat in hand. We still have not rebuilt Puerto Rico back and “some” people do not even realize they are part of the UNITED STATES OF AMERICA. They tell people from those places that get hit “You really shouldn’t live there but should move to somewhere else where you won’t have those problems”.

Well if you look across the UNITED STATES, you will see not one state that doesn’t need help. Not one. They all have their problems, Hurricane, Tornado, Fire, drought, floods. You name it it’s going to come for you. All of these people have built communities and want to keep their communities, that is understandable. So we all had better come together to help everyone across the United States keep their communities together.

Since Hurricane Andrew the Government has spent 213 billion to rebuild back Florida.

Were these loans or outright gifts?

Hi Rich, That is the number that our government has spent to rebuild infrastructure and bring Florida back. They were not loans.

This is a becoming a big discussion again. Rubio is going against this spending right now.

The money is not just for beach front properties. That might be lost in this discussion. Other areas up the coast and elsewhere are about flooding in low lying areas. That is substantially different. People are not going to find this an easy neglect further inland. Especially in responsibly chosen elevated areas.

Hi Leap1,
With the median height above see level across Florida at 100 feet I am not sure if there are very many responsibly chosen elevated areas, especially with the oceans rising. I was down in Pensacola for vacation on the barrier island and really liked it. My sister wanted to buy a house so we all could have a vacation spot and wanted me to go in on it but I told her they don’t build houses on stilts for nothing and I don’t want to bother with having to clean up behind a tornado.

But it does look like Florida is really looking at solutions. Here is a really interesting one.

adding one more layer to this 100 feet in one century? But that is not a given if we do the right things. So do we rebuild inland Florida but not the shore? It is a more appropriate idea but hard to get an consensus around.

But it does look like Florida is really looking at solutions. Here is a really interesting one.

What a novel concept. Bury the power lines and they don’t get cut in a hurricane. Use the streets to carry flood water away. And it took a professional football player to figure that out! And solar power, too. So it’s right back up as soon as the clouds pass.

More seriously, I wish the article had talked just a little bit about how the solar panels were designed to stay intact during the winds, and how the community gets power at night. Batteries? Connection to the broader grid?

Given that hurricanes and floods are the most predictable disasters, you’d think there would be more interest in minimizing the risks. The properties at lower elevations than surrounding areas, and the properties that are within a few feet of sea/river/lake level are the most vulnerable to flooding (and storm surge).

There should be regulations that prohibit or at least limit the property development in the most vulnerable areas. The National Flood Insurance Program should require that all rebuilding take place on higher ground.

The National Flood Insurance Program should require that all rebuilding take place on higher ground.

Why not allow building, but with the building built on stilts or some other type of construction that would minimize damage?

In Boston, all new construction along the coast must have “break out” walls and structural steel supports that can withstand flooding and a storm surge on the first few floors. I think that the assumption is that if a storm surge occurs, the windows and walls on the first couple of floors can be washed away with minimal damage to the rest of the structure.

I’d think that would be a better solution than not allowing any building along our beautiful coastlines.

I think they have the same thing in Florida for new construction. At least that is what I saw in new building. They were all on stilts about 40 feet off the ground with parking underneath.

Although Florida gets hurricanes every year, some are far more damaging than others. Some areas go years without major damage. That probably makes insurance more affordable.

The real driver seems to be flood insurance. Storm surge seems to affect large areas. Building in vulnerable areas creates more risk. And you would think higher premiums. Living near beaches may be attractive but perhaps insurance costs make that impractical for many. Those who live near the beach take the risk with no insurance or that choice goes to those who can afford it.

How much assistance should the uninsured expect from the Federal treasury?

The easy answer that makes it workable, the houses in “flood plains” need to go without bailing out. That includes on the coasts at certain elevations.

I was hearing in the live coverage that a very small percentage of people have flood insurance. Too expensive.

Flood insurance is extremely political. Congress tried to redraw the maps and raise rates a few years ago and got strong opposition. They did not do as well as they should have.

I have seen maps showing good coverage near the beaches but low coverage in the interior counties.

Some say rising insurance prices will reduce real estate values. It is one tool to encourage people to build in safer locations.

Some inland areas flood because there is a layer of impermeable clay just beneath the surface.

We have that locally. But no one builds in those temporary pools of water. We get it. They are not zoned for building. Seems Florida is zoned for anything goes.

We still have not rebuilt Puerto Rico back and “some” people do not even realize they are part of the UNITED STATES OF AMERICA.

We put a lot of money into rebuilding Puerto Rico… somehow the money got disbursed and a lot of the rebuilding it was paying for didn’t happen.

Right like the 2 man crew from Montana that was building their electrical infrastructure. Now how did they get that contract? Oh Yea they come from the same town as Zinke. 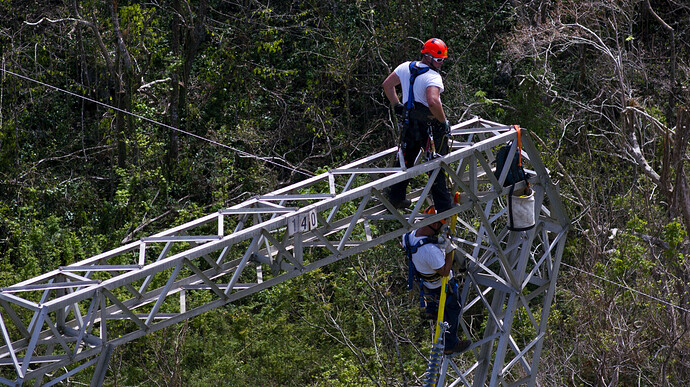 The decision by Puerto Rico's electric authority to give such a big contract — and such an enormous challenge — to Whitefish Energy has been met with surprise. The governor has now ordered an audit.