From Airport To New Tech - A New Chapter In Urban Living

At the former Tegel Airport on the outskirts of Berlin, Germany, workers keep uncovering bombs. The residue of the Prussian military and two world wars lingers at the 495-hectare site, which became home to city’s main airport in the 1970s, before it fell out of favor and closed in 2020. When the airport was built, land used for runways and around three meters either side were cleared, while other areas were left. Since May 2021, over 10 tons of explosives and ammunition have been moved or safely detonated from 20 hectares.

But unlike the antique ordnance, Tegel will not lie dormant for long. Because its hulking brutalist terminal, winding corridors – even its flight control tower – have already found a new purpose. Thanks to an €8 billion ($7.9 billion), multi-decade investment, it’s on a path to become one of the most ambitious smart cities in Europe.

The project, dubbed Berlin TXL, has been designed as a climate-friendly community full of sustainable technologies, with integrated university campus and innovation hubs to propel these technologies into the future. It’s pitched as the next chapter in urban living that wants to write the chapters after that too. 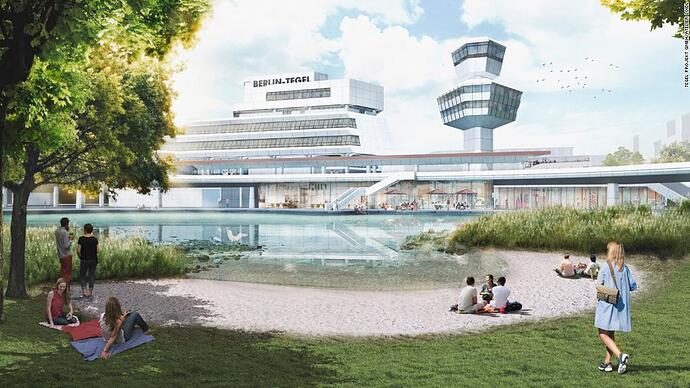 Work is already underway at the former Tegel Airport, which will be turned into a climate-friendly community full of sustainable technologies, with integrated university campus and innovation hubs.

Fuskie
Who thinks, on the 40th anniversary of Epcot Center, Walt Disney would be proud…

Premium Home Fool: Ask me a Foolish Question, I’ll give you a Foolish Response!
Ticker Guide: The Walt Disney Company (DIS), Intuit (INTU), Live Nation (LYV), CME Group (CME), MongoDB (MDB), Trip Advisor (TRIP), Vivendi SA (VIVHY), JFrog (FROG), Virgin Galactic (SPCE), Axon Technologies (AXON), Blackbaud (BLKB), StitchFix (SFIX)
Disclaimer: This post is non-professional and should not be construed as direct, individual or accurate advice
Disassociation: The views and statements of this post are Fuskie’s and are not intended to represent those of The Motley Fool or any other sane body
Disclosure: May own shares of some, many or all of the companies mentioned in this post: CMF_Fuskie’s Profile
Fool Code of Conduct: The Motley Fool's Rules – Terms of Use & Conditions of Sale
Invitation: You are invited to interactively watch Motley Fool Live online television: https://www.fool.com/premium/live/
Call to Action: If you like this or any other post, Rec it. Better yet, reply to it. Even better, start your own thread. This is YOUR TMF Community!