Monday officially opened its latest North American office in Chicago. The team will have 6,100 square feet in Chicago’s historic Old Post Office at 433 West Van Buren Street, offering our employees and Midwest customers an engaging and collaborative work space in one of the city’s premiere office spaces.

Collaboration is a core foundation of our culture, from Tel Aviv to Tokyo, New York to Chicago. Having just celebrated the exciting milestone of opening our North American headquarters in New York City in September, it’s wonderful to see our Midwest colleagues grow that momentum into opening this exciting space. The common thread between all of us is the great success and innovation that comes from promoting collaboration and community, and this is especially true in Chicago.

Similar to the New York office, local monday employees were fundamental in planning this expansion and choosing an office location and space. Those employees owned nearly the entire process – from determining the convenience of commuting, location relative to local dining, to incredible amenities both onsite, such as 3.5-acre urban rooftop oasis – the largest of its kind in the city – and additional options nearby. From beginning to end, monday.com entrusted this decision to employees directly impacted, furthering its commitment to transparency and autonomy across the company….

Saul Here: Wow! I have a lot of ambivalence about this.

They are obviously growing like mad and not slowing down, with enlarged London/EU office, New York/North American office, and now a second large office in Chicago. From the wording of the announcement they obviously care about making their employees happy. You have to assume from this that they see themselves as moving up into the ranks of the major players and that they are no longer a second rank player. All good,

BUT, there is a feeling in this announcement that they care more about happy employees than they do about the company making money, and it sounds as if this office space, as with the NY City space was prime, very expensive, space, and a lot of it. I just don’t know how to think about this. Should I be happy that management, who has the best view of the company’s business, has the confidence in the future to keep building out like this, or should I be seriously worried that all these rents are adding to their operating expenses, and that management doesn’t seem to care?

Oh, I forgot to mention, they opened an office in Japan this month as well. I feel less ambivalence about that, and see it as an obvious positive for future growth. But Geez! They are moving like mad.
Saul

My 2 cents: I feel like this is a situation where the numbers aren’t backing up management’s confidence. I think you’re right to worry that they’re going full speed ahead with spending and expansion while the revenue growth is clearly slowing. If the growth wasn’t slowing so much, you probably wouldn’t feel so ambivalent, and would (rightly) trust management more.

Yes if they were still growing at 90% or 95%, and/or were actually profitable, and if their Free Cash Flow wasn’t negative $19 million, and if they hadn’t blown $6 million or $8 million a year ago on a Super Bowl ad, I wouldn’t be so concerned.

But, swinging the other way again, managements whose businesses are falling apart just don’t go around tripling or quadrupling their office space in prime real estate… they just don’t.

And Monday’s numbers:
Revenue still growing at 75% yoy
And sequential revenue growth reaccelerating to 14% QoQ
Gross Margins of 89% (do we have anyone higher?)
NRR over 125%
NRR for customers with over ten employees over 135%.

And that’s why I kept my small position.

Regarding your comment on the growth of Monday’s offices. This sounds a lot like We Work. I don’t really see how having offices in different North American cities helps the company. And 6000 squares feet of prime real estate and its associated upkeep is no small thing.

I wonder how many office Microsoft set up around the country when it was growing. It is not as if Monday had people going around knocking on doors. Isn’t small footprint and low capital expenditures part of what makes SaaS a great investment?

I also dislike this. This sentence especially:

“such as 3.5-acre urban rooftop oasis – the largest of its kind in the city”

That sounds excessive to me. That’s another 141640 square meters of gardening opex. Big tech is currently seemingly starting to go the other direction towards cost-cutting, as there is increasing evidence of excesses, low growth and declining profitability at Google, Microsoft and Meta for example. Not to mention Twilio, the perennial opex offender who actually cut staff.

And with Monday my personal big gripe has been the lack of operating margin improvement when looked at vs the “greats” of Crowdstrike, Snowflake and Datadog. Below is that benchmark for Monday vs these companies, starting at the same roughly $45m in revenue starting point for all companies (same as my monthly write-up). Monday initially improved this fairly rapidly but then it got stuck at the same level 5 quarters ago. 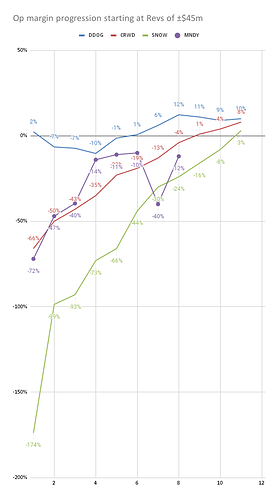 Monday is the purple line. And the problem is where it’s going next. It has not gone up for the last 5 quarters and had a big negative when they got spendthrift on a big superbowl ad. So where to next? Opening huge expensive new offices (vs for example Gitlab who is fully remote so does not have this expense) does not inspire confidence in me that they are on a path to improving that metric.

I share your ambivalence, and I am concerned about the numbers mentioned down thread.

Worse, I am ambivalent about workspace at all. Here is why.

My baby boy works for FEMA in Chicago. The job requires a college degree. Not anything special, just a general degree. The job starts at about 70k and over just a few years, can end up being a 115 k a year job. FEMA has been unable to hire people in Chicago at all. When FEMA announced remote work with one day a pay period in Chicago, they were able to hire the people they needed. People in semi rural places took the jobs, they fly in for the last and first day of a pay period so one flight a month. The rest of the time they work remote. This is the power of remote work.

So on one hand, building out office space for work that can be done remotely is foolish and a complete waste of money and worse hurts the ability to attract talent. However, if the business demands on site work force, then Chicago is one of the best cities to do it in. The population pyramid of Chicago shows a large bulge of young working age population and the housing market is actually pretty inexpensive. For example, a nice two bedroom condo overlooking the lake and yacht club in Chicago can be rented for about 2500 a month. The same square footage costs the same with a view over Saint Andrews bay in Panama City Beach Florida.

My son, a native Texan from a small town, and one that has lived in the Midwest, loves Chicago.

So, I am if two minds. If it can be done remotely, the office space is a drag. If it cannot, an attractive spot in Chicago is a big draw in a tight labor market.

I also dislike this. This sentence especially:

“such as 3.5-acre urban rooftop oasis – the largest of its kind in the city”

I too initially had mixed feelings reading their press release, and decided to try and look things up. So, to clear up any confusion, they’re not renting an rooftop oasis. Rather a space in an office complex that happens to have a rooftop oasis. Major tenants include Uber, Walgreens, Pepsico, CBOE and Cisco. So what might the rent be? I found one article - unfortunately behind a paywall - but here’s a tiny quote.:

Average base rent at the building comes out to $30.37 per square foot, with the smaller tenants paying rent in the high $20s on average.

Looks like the estimate is from mid 2019. I’m no expert on real estate, so can’t judge how prime and expensive this is.

What I disliked about the press release, was the press release itself. They have a thing for making it sound like they’ve bought the Empire State Building (again). And this particular release left me wondering who the audience is. However, this might be cultural thing, and perhaps we are giving too much attention to a single paragraph? The last parts were of more interest to me. For example:

“Further expanding to America’s second city is a huge milestone for monday.com as we continue to grow our presence here,” said Tom Ronen, High Touch Customer Success Director, monday.com “This beautiful space, […], will help further support our team’s collaborative efforts, and guarantee our commitment to engaging with customers on a deeply personal and local level. […].”

There is a different thinking
Maybe we are influenced by the external environment, thinking about why they can telecommute but spend money to rent offices, maybe this is their company and founder culture.

Monday opens yet another office:

MIAMI & TEL AVIV, Israel–(BUSINESS WIRE)-- monday.com Ltd. (NASDAQ: MNDY) (“monday.com”), a work operating system (Work OS) where organizations of any size can create the tools and processes they need to manage every aspect of their work, officially opened a new North American office in Miami at 2125 Biscayne Blvd with over 3,000 square feet. This location will provide key support for monday.com’s customers and serve as a critical hub for growing monday.com Partner Ecosystem across Latin America.

“We are big believers in working together, exchanging ideas and collaborating in a meaningful way,” said Mike Lamm, VP People, Americas, monday.com. “Having a local office where our key stakeholders across the region can come together is crucial for our success. Coming off the heels of our New York and Chicago office openings, we are beyond thrilled to begin flexing our collaborative muscle in person again, especially in the booming tech market that Miami has fostered.”

Following the same employee-first approach as both the New York City and Chicago office openings, the priority of the Miami office was to implement employee input and create a sense of community for the local staff. Bringing in influences of Miami culture, as well as the collaborative nature of the monday.com team, the office space offers various settings that accommodate all work styles without compromising a welcoming environment. Plus, monday.com is excited to join countless other technology companies who are opening up offices in Miami, and ready to encourage innovation in a new, vibrant location.

This year has seen multiple global office openings for the monday.com team as the company reignites the benefits of in-person connection. As an innovator in the future of work, the monday.com team made it a mission to prioritize in-person collaboration without sacrificing the comforts of flexible work. The opening of several US-based offices is the first step in bringing the best minds in the technology industry back together through a model that accurately reflects employee needs and the future of work.

“Miami is a great gateway to LATAM and a strategic region for us to support our customers and build strong relationships with our Partners ecosystem,” said Dror Spindel, Director of Channel Partnerships, Americas. “This office is the latest addition to monday.com’s expansion in North America, and will help our team tap into the vibrant community and creative culture of Miami not only for the office itself, but also the perspectives that our workers will bring to the table while serving our customers in the very best way.”