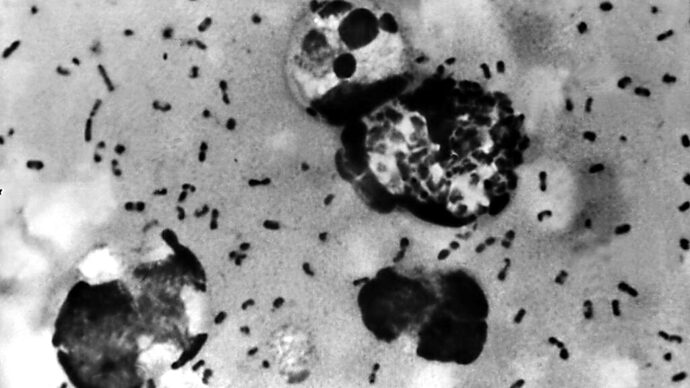 Black Death may have influenced evolution of genes involved in immune...

A new study finds that the Black Death may have influenced evolution of genes involved in immune responses.

In a paper published Wednesday in Nature, Poinar, together with researchers from the University of Chicago and France’s Institut Pasteur, studied DNA samples from individuals at the East Smithfield graveyard as well as people who lived just before and a few decades after the Black Death. The team found that the Black Death not only created selective evolutionary pressure for genes that promote better immune response to Y. pestis but also may have contributed to humans’ current susceptibility to autoimmune diseases like Crohn’s disease.

Studies have estimated that the Black Death killed 30%–50% of Europe’s population between 1347-1351. (For scale, the mortality rate for the Covid pandemic is less than 2.5% for most countries.) The “plague resistance” Norman referred to stems from the hypothesis that this concentrated mass death event could have caused hugely selective pressure on the genetics of the individuals who survived, who would likely have passed down genes that allowed them to survive the plague.

While a few studies have previously looked at the ancient DNA of plague victims, until this point, no studies had shown that genetic variances in people’s DNA before and after the Black Death were connected to the body’s immune response to Y. pestis*.*

The research team looked at the DNA sequences of immune-related genes from both a London cohort of 318 people and a separate Danish cohort of 198 individuals from before, during, and after the plague. The sample sizes are both bigger than previous studies and allow causal arguments because of their spacing through time. The researchers found 245 variations between the pre- and post-pandemic London samples.

It takes more than certain genes to trigger autoimmune diseases. These genes have been present in the population for centuries, but so many autoimmune diseases were rare until recently. There’s something toxic about modern life that promotes autoimmunity.

That said, I have difficulty believing that Crohn’s disease or other autoimmune diseases provide protection against bubonic plague or other diseases. Are people with these diseases somehow faring better in the current pandemic?

It takes more than certain genes to trigger autoimmune diseases. These genes have been present in the population for centuries, but so many autoimmune diseases were rare until recently. There’s something toxic about modern life that promotes autoimmunity.

I seriously doubt that. I get it is popular sci fi in the blogger world and diet books glory in such theories. I think it is a great suggestion for separating money from owner of said money.

Human beings have not changed much for eons biologically.

That is the point of the Op’s findings. That something killing over 30% of the population actually does make for change.