The End of Magical Thinking 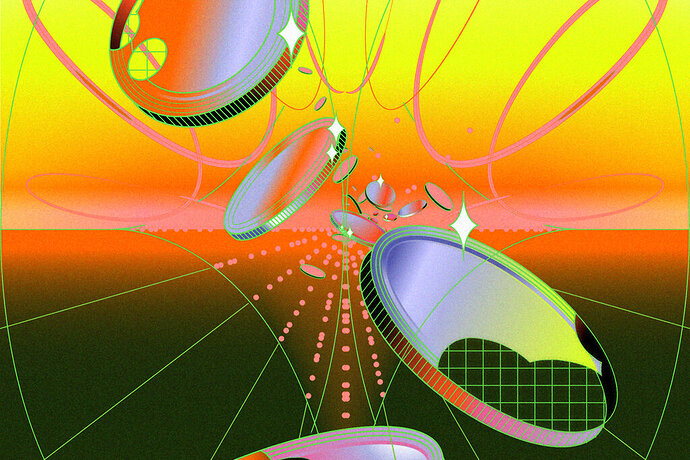 Opinion | The Crypto Collapse and the End of the Magical Thinking That...

Dogecoin. WeWork. The Metaverse. It was an era of illusory and ridiculous promises.

…
For these purposes, magical thinking is the assumption that favored conditions will continue on forever without regard for history. It is the minimizing of constraints and trade-offs in favor of techno-utopianism and the exclusive emphasis on positive outcomes and novelty. It is the conflation of virtue with commerce.

Where did this ideology come from? An exceptional period of low interest rates and excess liquidity provided the fertile soil for fantastical dreams to flourish. …

Mainstream financial markets came to manifest these same tendencies, as magical thinking pervaded the wider investor class. During a period of declining and zero interest rates, mistakes and mediocrities were obscured or forgiven, while speculative assets with low probabilities of far-off success inflated in value enormously…[end quote]

When money is free and animal spirits inflate bubbles, future profits seem to have a huge present value.

Once the real time value of money is positive (interest rates are higher than the rate of inflation) the present value of zombie companies with high debt and negative cash flow suddenly looks mighty small.

Why press reporters are not generally millionaires. Why art critics are generally not great artists.

More importantly looking at charts can tell you much more than the NYT.

**Note the current bottoms are on the top of the prior tops.

The only reason I got out of my tad bit of Eth was to get away from Coinbase just in case. 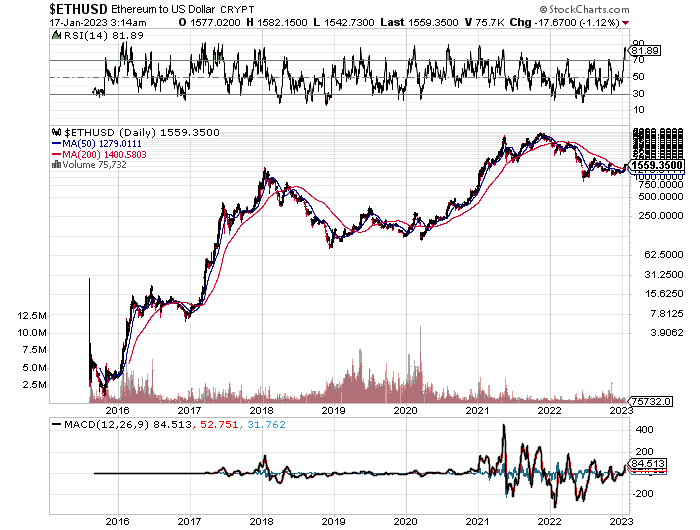 $ETHUSD - Ethereum to US Dollar 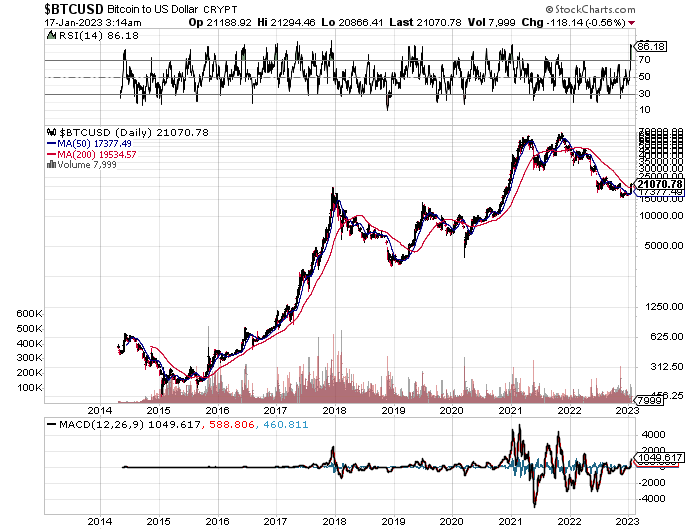 $BTCUSD - Bitcoin to US Dollar

Ha! The New York Times has a very loose definition of “era”.

Ha! The New York Times has a very loose definition of “era”.

That is how reporting is…more soap will sell.

If you mean human folly…it is not over.

The video game industry wants to capitalize more on NFTs. Last I saw the video gamers were over 280 million people.

That is not just cards or art where there are some 30k good sized to major investors.

The problem is how to build infrastructure left with enough time to pay for itself before the next down turn. The more manic the rise the more expensive the infrastructure.

There is evidence that the cycle is shortening slightly which matters to stabilizing BTC and Eth.

Flying was once Magical Thinking. Image how Magical flying to the Green Cheese in the Sky was!

I wouldn’t touch crypto with a ten foot pole but the idea of blockchain is exactly what money needs to get back to its origins.

Most people don’t know what money is. They sure know how to use it just as they don’t know what Qaz knows about the Internet, they sure know how to use it. The definition of money that comes closest to reality is “Money is Debt.” There is real debt and forged debt. Fiat currency is forged debt, nothing real of value was created to back that debt, only promises. Same for fractional reserve banking, money conjured out of thin air backed by statistics, that most people will not ask for their money back at the same time. But bank runs do happen! BRP!

We need to go back to the age of clay tablets to find out what money is, or was before through the medium of Complex Systems all the newfangled variations ‘emerged.’ Emergence is a critical aspect of Complex Systems

Emergence refers to the existence or formation of collective behaviors — what parts of a system do together that they would not do alone. 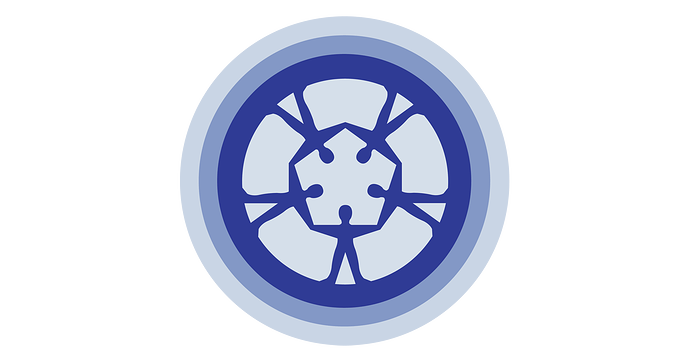 You cannot do banking by yourself, you need depositors and borrowers. You cannot have fiat money without government. Money itself is an emergent property, without trade you don’t need money. To find out what money originally was we need to look at early trades recorded on clay tablets. “Sam gave John 20 heads of cattle.” The debt is, “John owes Sam 20 heads of cattle or goods and services of the equivalent value.” It’s an accounting system!

Guess what? Blockchain is supposed to be an incorruptible accounting system we can run on computers instead of on clay tablets. Instead of recording the actual transaction all that is recorded is the agreed on value of the transaction, at $250 each, 20 heads of cattle is $5,000.

If voters agreed, the government and banks would be allowed to make forged money (fiat & loans). Emergent properties of money itself.