The Sorrows of Empire - Redux

The 2004 release date of Johnson's book coincided with the point at which many Americans were beginning to recognize the magnitude of the costs in lives and treasure likely to arise from the wars launched in Afghanistan then Iraq -- wars launched ostensibly for justice and democracy whose actual tactics abandoned any focus on killing bin Laden and destroyed any social infrastructure required for democracy in either country. A nearly identical book, American Theocracy by Kevin Philips, was published in 2006 with nearly identical analysis and conclusions with additional emphasis on how the resulting outcomes of those mistakes were further warping domestic American politics, magnifying the entire feedback cycle. (Click here for a review.)

Obviously, books published in 2004 and 2006 were unable to influence American policy makers who LAUNCHED those catastrophes but in hindsight, it is clear there were hundreds or thousands of people in government who still could have / should have gained insight from these books but didn't -- the United States continued doubling down on the original failures for more than a decade before punching out.

In 2022, it is very evident there is one other person on the planet that could have benefited from reading and understanding either one of these books -- Vladmir Putin. Ukraine's refusal to surrender as soon as Z-tagged tanks started rolling and Russia's failure to take Kyiv within days as Russia expected made it immediately apparent Putin lacked a clear understanding of his actual hand in the game. What is more fascinating and tragic is that the initial shock from the first failed weeks of the war didn't jolt Putin out of his self-induced fog to reset strategy to avoid a larger catastrophe -- for Russia and the world certainly but even for himself. Every action he has taken since has only further exposed how weak Russia is in all dimensions (manpower, material, logistics, training, tactics, discipline, military leadership). Without nuclear weapons, Russia would appear to be punching at bantamweight levels.

It's interesting to try to analyze the events in Ukraine and Putin's decisions as a completely neutral observer, ignoring the personalities involved and pondering only the global situation, using some of the concepts of The Sorrows of Empire and American Theocracy as touchpoints. Above all, the actions taken by Russia represent a colossal failure of imagination in leveraging the world situation to gain economic, political and social power. One way to summarize the world's problems might involve mapping current issues into these buckets:

The world cannot abandon internal combustion engine vehicles and coal / gas energy plants overnight. There will continue to be steady demand for current dirty fossil fuels for easily the next forty years. Russia has oil and gas reserves in spades and is perfectly positioned to continue profiting from fossil fuel production, even in a world moving away from fossil fuels. If the world still needs X million barrels of crude per day, it would be preferable to extract it with "classic" means rather than fracking that ALSO requires millions of gallons of WATER that are in short supply and threatens underground fresh water sources through contamination. The US has temporarily gained some fossil fuel independence because of fracking extraction technologies but it seems clear that all of the hidden ecological costs for that technology have not been fully captured and factored into prices yet.

If the world is going to continue buying oil and preferring drilled oil over fracked oil, wouldn't it be better to buy less oil from regions using the revenue to fund ongoing battles in centuries-old religious conflicts and buy more from a region also contributing to the science helping to replace it? That could be Russia, if it wasn't initiating terrorist attacks in neighboring states, annexing them, then rolling in its military to protect "ethnic Russians" as part of some Fracture Fairy Tales dream of a "greater Russia" that never was.

Desired reductions in fossil fuel consumption require a completely revamped electrical grid in every country. Revamping the entire world's electric grids requires vastly more intelligence in the grid itself and devices that connect to it for consumption and charging. That intelligence requires vastly more intelligence and communication among devices / vehicles using that grid to smooth demand for optimal generation and transmission efficiencies. All of that requires software and data analytics built upon software engineering skills. Russia has software engineers with skills matching those in any other country. Unfortunately, much of that brainpower has been dedicated to state-run surveillance measures, disinformation efforts and wholesale, international computer crime. Other than Kaspersky Labs, I cannot think of a single Russian brand producing "retail" software for typical businesses or consumers used in the rest of the world.

A re-engineered world will also hinge on advances in material science -- improving semiconductor technologies, improving charging times and capacity of batteries, improving photovoltaic efficiencies, etc. Russia as a country hasn't been a slouch in basic science education and research so it has the intellectual "raw materials" to participate and lead in this area as well. Unfortunately, as news clips make clear, Putin's mass conscription targeting 300,000 additional men has triggered TENS OF THOUSANDS of highly educated big-city Russians to flee the country to avoid serving in a war nearly guaranteed to kill them. It is unlikely that brainpower will return without a change in leadership and the productivity of those that remain filling in the gaps will drop significantly. Instead, that brainpower will boost the economic power of the countries taking in those refugees, further widening the gap between Russia and just about every country.

This failure of imagination on Putin's part was already foreseen months ago. A piece in The New Yorker (discussed here) three weeks into the war outlined a repeating pattern of dysfunction in Russian history dating back centuries:

This is the Putin kleptocracy in bullet form. These represent the controlling dynamic in Russia since Putin took power.

Thinking through these possibilities might be a way of maintaining some optimism for what might be possible once justice is served to Putin and his cronies. The downside is that authoritarian regimes self-select for paranoid, criminal, mega-maniacal tendencies which never make for stable, predictable transitions. Will Putin's replacement have any better perspective? 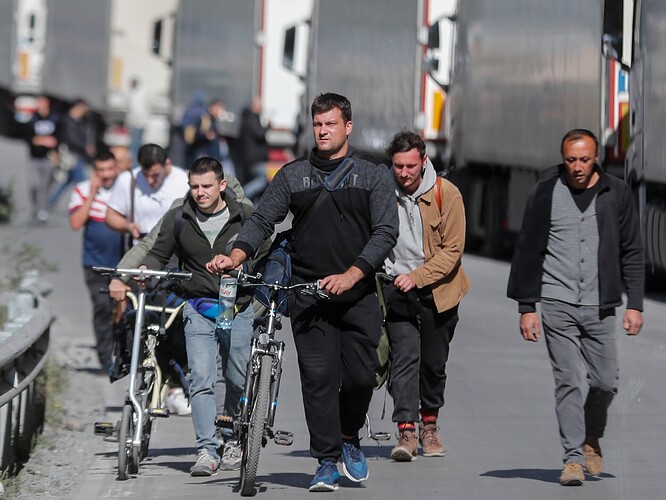 More than 194,000 Russians have fled to Finland, Georgia and Kazakhstan since Putin’s call to fight in Ukraine war. 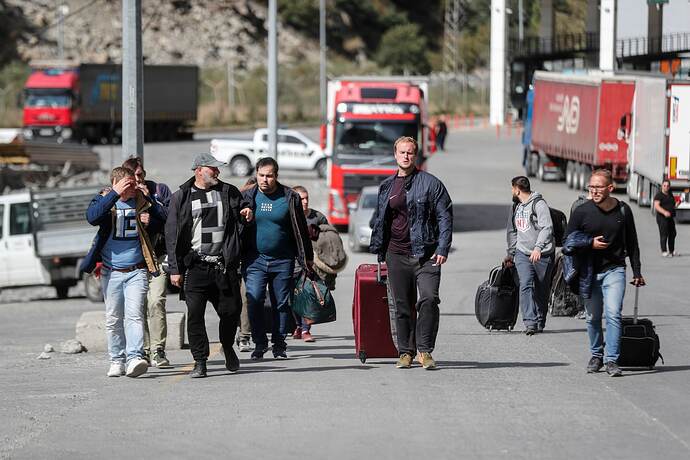 The Russian men fleeing mobilization, and leaving everything behind

Putin’s announcement of a military mobilization of Russian reservists for his war in Ukraine has set off a frenzied dash for the country’s borders.

Will Putin’s replacement have any better perspective?

Unfortunately this statement has an assumption that is likely false.

The normal assumption is that there will be Russia and Russia will have a new leader. History suggests otherwise. When the glue, whether it be a dictator, theocracy , an imperialist power or any other strong central institution holding a country together and that power fails, the country breaks apart.

My expectation is that the Southern caucuses will be embroiled in religious sectarianism exported from Pakistan and Afganistán. Each in turn will break away from the failing Russian state leaving Russia even weaker an more vulnerable. Worse, an out migration of young people will strip the country of needed people.

It has been a failed nuclear state since Stalin’s time.

There has never been a successful Russia.