Work: Truckin' In the 21st Century 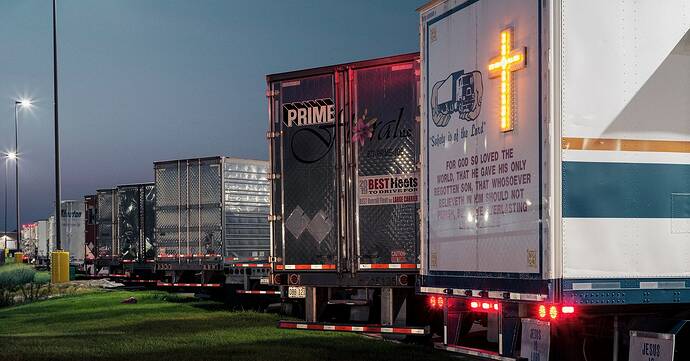 Life as a 21st-Century Trucker

Technology, corporate greed, and supply-chain chaos are transforming life behind the wheel of a big rig. I went on the road to find exactly how.

I HAVE COME here on a strange sort of mission: I want to find out what’s gone awry in American trucking. For more than a decade, freight-haulers have been held up as the poster children of a supposedly inexorable fate: 2 to 3 million drivers out of a workforce of 3.5 million—one of the largest in the US—are slated to be sidelined by AI. Yet recent years have hardly borne out that doomy prophecy: The self-driving industry has been humbled by fatal crashes, scandals, a federal investigation, a pedestrian death, negligent homicide charges, and stillborn business promises. Meanwhile the pandemic has wreaked havoc on our supply chains and made us more dependent on truckers than ever—more beholden to an industry that, for all its hugeness, still can’t keep pace with our needs. It’s an industry that dwarfs all other forms of domestic freight transport: 72.2 percent of the total tonnage of goods shipped within the US is moved by truck (air transport moves less than one-tenth of 1 percent). Investors—inspired, doubtless, by the shipping delays and logistical breakdowns that threaten to upend the economy—have sought furiously to augment or outright replace that workforce, pouring money with redoubled fervor into automation since 2020. But they have found scant success: What we have, ironically, is a nationwide shortage of the very workers alleged to face obsolescence.

What’s behind that shortage? And how exactly is technology altering life inside the cab? I want to know why 90 percent of the people who enter this profession quit within the first year; why a red-pilled faction of its members—affronted by a vaccine mandate that was, one senses, only the last in a litany of grievances—formed the Freedom Convoy and People’s Convoy last winter and spring, blocking border crossings between the US and Canada. I hope to understand, too, how the relatively few truckers who stick around sustain themselves: the myths they live on and the shrines to which they come, parched, to be replenished and raised up.