Zumwalt "deployed" to Chinese theatre - less of these being built 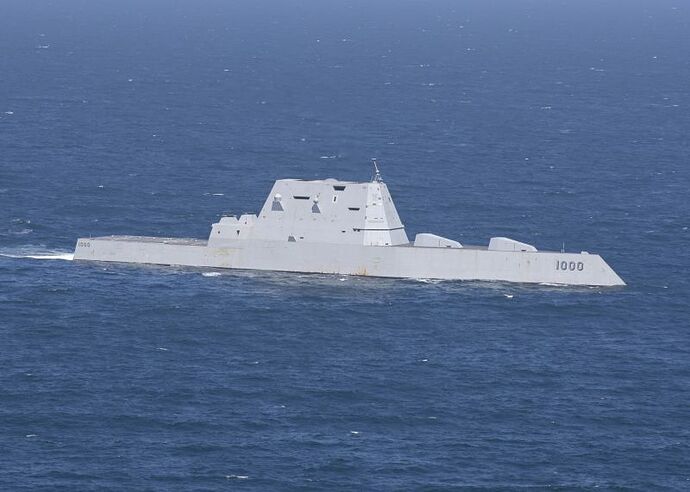 The US Navy's most advanced surface warship is showing its stealthy profile in the western Pacific on a mission that may set the stage for the eventual deployment of US hypersonic missiles to the region. 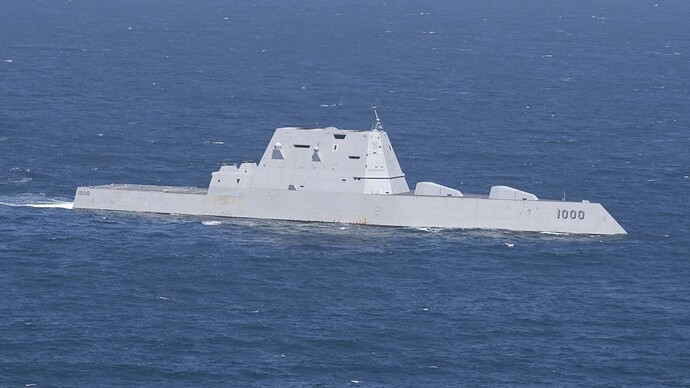 The US Navy’s most advanced (stealthy) surface warship is showing its stealthy profile in the western Pacific on a mission that may set the stage for the eventual deployment of US hypersonic missiles to the region dominated by the Chinese navy.

The USS Zumwalt is the first in a class of three multimission guided missile destroyers the Navy says will “create a new level of battlespace complexity for potential adversaries.”

An August report from the US Naval Institute said the Zumwalt will be upgraded next year to accommodate the Pentagon’s Common Hypersonic Glide Body (C-HGB), a weapons system that uses a booster rocket motor to fire missiles at hypersonic speed.

At 610 feet (185 meters) long and displacing 16,000 metric tons, the Zumwalt is “the largest and most technologically advanced surface combatant in the world,” according to a Navy fact sheet.

In contrast, Arleigh Burke-class destroyers, the backbone of the US Navy’s fleet, are about 100 feet (30 meters) shorter with a displacement under 10,000 tons.

The US Navy will have only three ships in the Zumwalt class, the others being the USS Michael Mansoor and the future USS Lyndon B. Johnson.

The PLA Navy has six Type 055s active and more are expected to be coming as part of a massive shipbuilding program that has seen the Chinese naval fleet overtake the US to become the world’s largest.

USS Zumwalt is armed with 80 vertical launch cells for missiles that can strike land and sea targets as well as anti-submarine rockets, but the Type 055 has 112 launch cells capable of the same tasks.

The Zumwalt class of the destroyers has been a controversial and costly program for the US Navy. With research and development costs rolled in, the three ships in the class come with a price tag of about $8 billion each, according to a 2018 Government Accountability Office (GAO) report to Congress.

While originally, the per-ship cost would have been lower if all the ships envisioned were ordered, but after numerous problems, Congress cut the quantity to be built. It was decided the Zumwalt class would need substantial modifications to perform an anti-ballistic missile defense mission, something the Arleigh Burkes could do more cheaply.

The ships have also been slow to come on line. Zumwalt was commissioned in 2016, but it took four years for the Navy to accept final delivery from shipbuilder General Dynamics after all its systems were checked out.

The US military has always stressed a “cost is no object” if high technology can create a better weapon system than a high volume, lower tech and lower cost, model. This maximizes the ability for members of Congress to each get a piece of the action to keep workers busy in their state, but creates a logistical nightmare for the builder, not to mention the design challenge to get all the various pieces of technology to work together as a single system. In addition, the larger the project (think aircraft carrier), the more tempting to Congress, regardless of the potential reduced efficacy in the context of “the next war”.

Spend enough money on projects like the Zumwalt and there’s a “good” excuse for continuing to increase the budget of defense spending while not having an ongoing supply of less glamourous items like Stingers, Javelins and ammunition as has been demonstrated by the speed these are being drained over a comparatively short period of time in a limited conventional war theatre.

Another example of an “interesting” strategic procurement is the Gerald Ford class aircraft carrier which costs $13B (not to mention the planes it carries, the ships required to support it or thee men/women it carries). While providing an awesome level of firepower within the range of its planes, our adversaries have created specific weapon systems designed to remove these vessels quickly from the board. In this day and age, these vessels are more important to the commanding admirals (who all aspire to running a carrier) and the Congressperson in whose state the components are being built.

In the same fashion that a modern war can be fought with infantry-carried weapons, department store bought drones, and the descendants of the Katyusha rocket launcher (well, OK, that was a gross oversimplification), we are ignoring the changes to navel warfare and continuing to build vessels designed to win previous wars.

The alternative challenge is a weapon like the Zumwalt which is a magnet for more and more complexity which balloons a good idea (a stealthy missile destroyer) into an extraordinarily expensive behemoth which tries to cram everything into a small ship and bloats it into a very attractive individual target (rather than a number of “almost” as capable ships at a lower cost). While we take it for granted that the Chinese are studying our navel designs, it is possibly worthwhile for us to study the designs they came up with after that effort.

It’s ironic that this boondoggle is named after Elmo Zumwalt, who advocated a “high/low” approach, a mix of high and low end ships. The USN has no low end ships. Everything they have is expen$ive. DoD is constantly sold bleeding edge technology, then has to keep writing checks for systems “development” of questionable added value. The steam cat has been throwing planes in the air since the 50s, but the Ford has electric cats, which have been the source of continual reliability issues. Latest thing I read about the Ford was the bomb elevators didn’t work. Carriers have had bomb elevators since the 1920s, but, suddenly, we can’t build a bomb elevator that works?

I expect the Zumwalts to have a short career, before landing in the reserve basin at the Philly yard due to a mix of reliability issues/running costs and lack of a mission, right along with the LCSes.

There are too many assumptions in your writing that studying the Chinese ships has not happened. That 112 missile ports on a Chinese ship v the Zumwalt’s 80 was not studied for complexity. That aircraft carriers can not defend themselves. They can. That a forward offense is not the goal is skipped. That the larger Chinese navy is maintainable by China. In all our decades since WW II we have been able to expand our economy in support of the military. That is no longer at all true for China. The Chinese economy will shut down much of their future military building plans and shutter some current operations. Water is their problem. It is incurable. The Chinese simply do not have more water.