A Letter to Advertisers from Musk on His Purchase of $TWTR 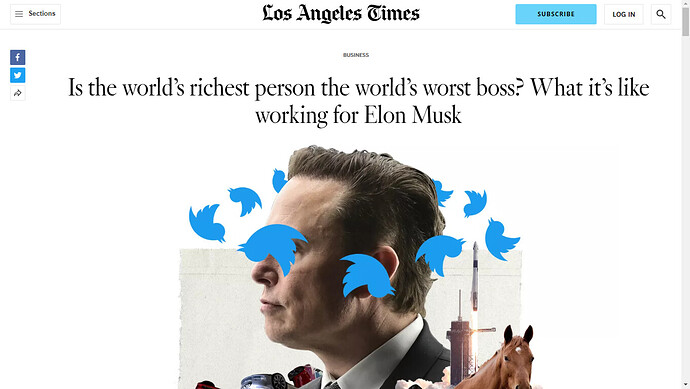 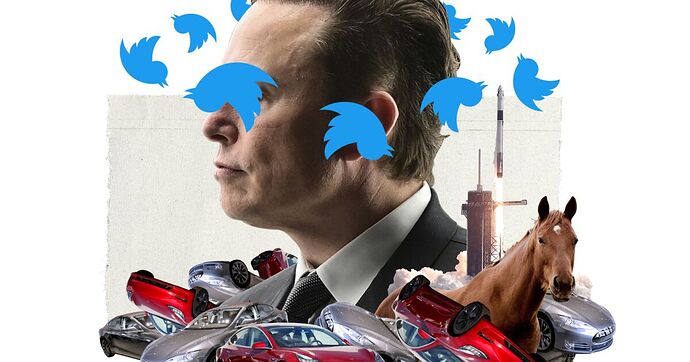 Elon Musk's track record as a boss is an endless scroll of impulse firings, retribution, tone-deafness on race — and the impregnation of a subordinate.

Musk trolling Donald Trump to get back on Twitter. I actually laughed at this one: 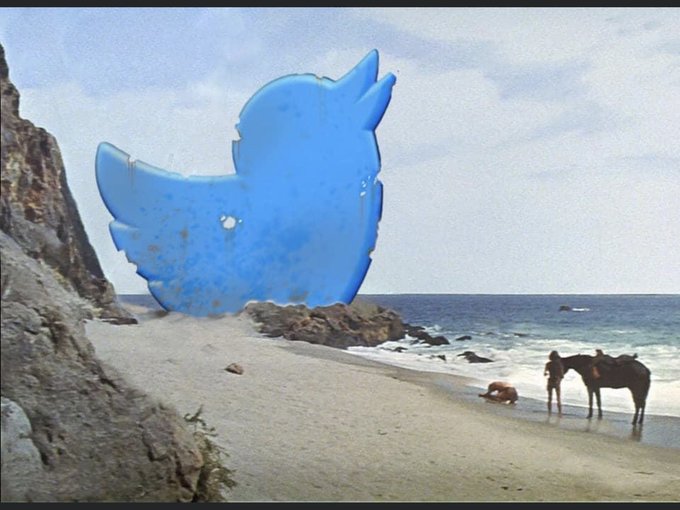 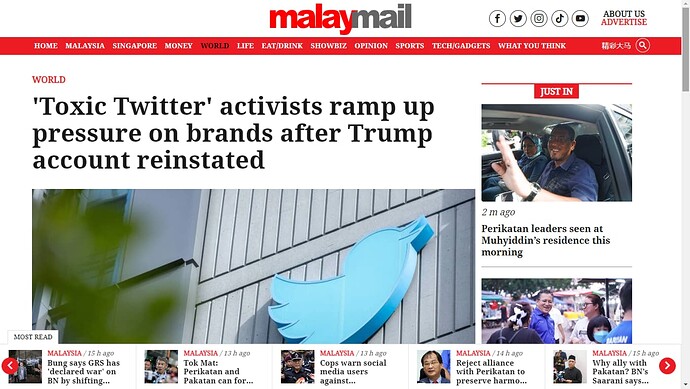 Of Twitter’s top 100 advertisers by total spending this year, 51 have paused ads according to private conversations with the coalition, public statements or spending data provided by ad measurement firm Pathmatics, Carusone said.

The coalition is asking brands that have not publicised their Twitter pause to issue public statements and help generate pressure on the other 49 advertisers that have taken no action, he said.

“You need to take a stand and draw the line,” Carusone said. “It’s important for big spenders to say they have stopped.”

$IBM, $PEP, $WEN and several others have actually added more $$$ to their Twitter advertising: 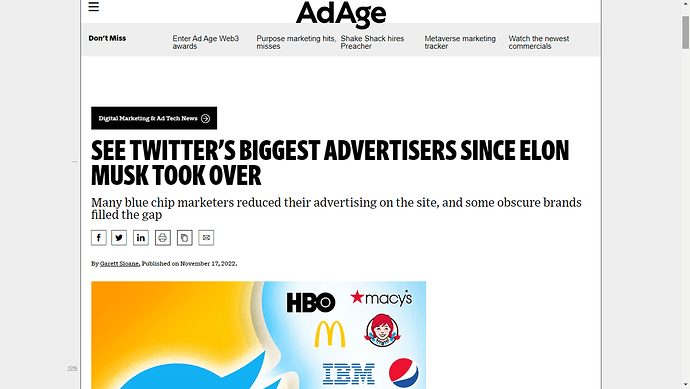 Good luck to them. Musk has just laid off a bunch of people from the sales team, even though they had elected to stay with Twitter 2.0. That’s right, less than 48 hours after they passed on the 3 month severance deal and went “all in”, Musk laid them off. 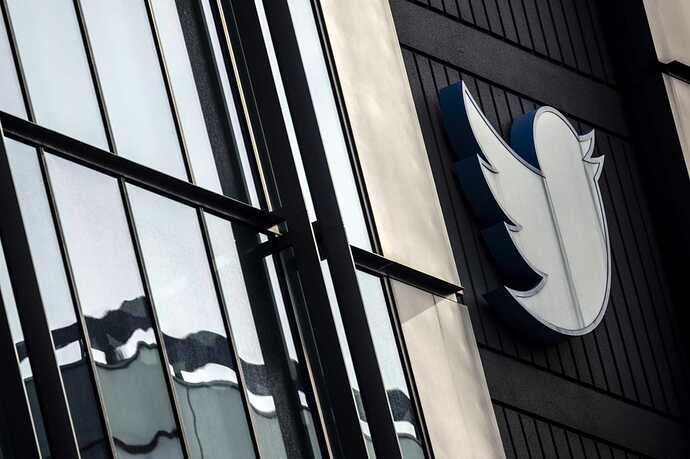 I never got to see Chris Kluwe’s $8.00 blue check mark and fake Elon account, but the fact Elon barred him for making fun of Elon makes me laugh at the absurdity of Musk blunderbussing across Twitter, now that he owns it, playing 1st Amendment God and Howard Roark. 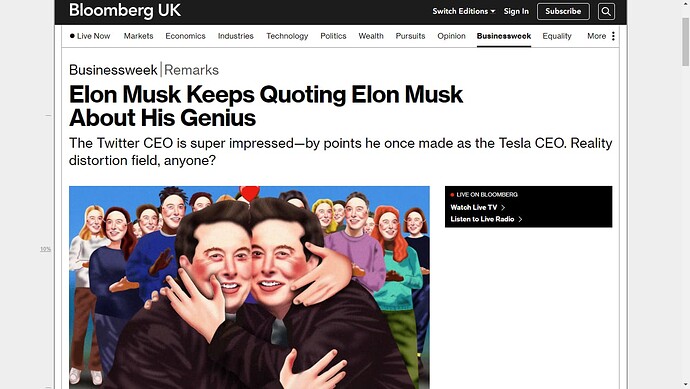 Amid all this, it’s easy to forget that Musk’s Twitter takeover was originally framed as an antidote to what Musk characterized as capricious and biased content moderation decisions. (Musk was particularly upset that the satirical website the Babylon Bee had been suspended.) Strangely, given his professed fondness for comedic parody, he’s at times seemed humorless in addition to ineffective. One of the most amusing moments of his brief tenure so far occurred when his plan to charge users $8 a month for “verification” led to a proliferation of “verified” accounts impersonating him in order to mock him. The impersonators included the comedian Kathy Griffin and former NFL punter Chris Kluwe, who, as Musk, tweeted about the joy of “enjoying a fresh, steaming cup of my own urine.”

Musk turned peevish. He made up some new rules and then banned Kluwe, Griffin and others, and made clear that whatever the policy, his feelings on the matter were personal. He cracked that Griffin, whom he later reinstated, had been banned for “impersonating a comedian.”

Musk also took to firing anyone on his already shrunken staff who criticized him publicly. According to the Platformer newsletter and the New York Times, he asked aides to dig through old Slack messages to find anybody who had been insufficiently loyal to him in private. These employees got fired, too. The ones who remained were subjected to a weird loyalty test, during which they were forced to choose between losing their job (and getting a three-month severance package) or clicking a button that confirmed they were committed to being “[extremely hard core]

This meme stolen off Twitter, which is acting a bit buggy this morning when I try to snatch the exact address for this: 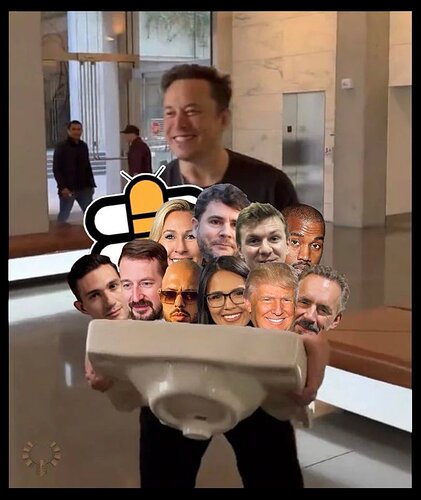 Twitter is up and running, no problems as experienced earlier this morning.

Meanwhile, someone won’t be coming back to Twitter as long as Truth Social is still an ongoing concern. 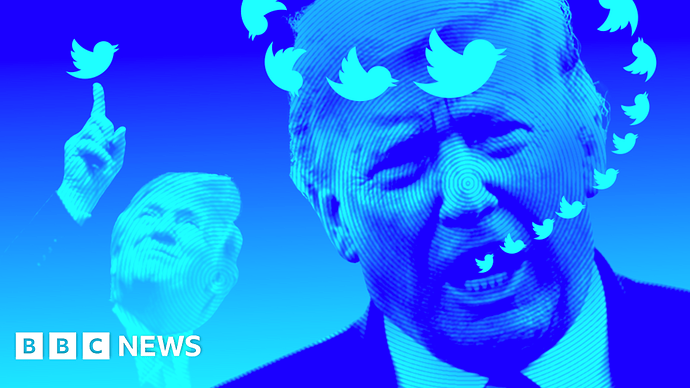 Why Donald Trump isn't returning to Twitter (for now)

How the former US president might lose money if he starts tweeting.

In 2017, he said he wouldn’t have become president without it.

“Twitter is a wonderful thing for me, because I get the word out… I might not be here talking to you right now as president if I didn’t have an honest way of getting the word out,” he said.

After Twitter’s new owner Elon Musk reversed Mr Trump’s permanent suspension, you might have thought the former president would jump at the chance to come back. But so far, he hasn’t taken up that offer.

More from the BBC on Truth Social and $DWAC:

Why Donald Trump isn't returning to Twitter (for now)

How the former US president might lose money if he starts tweeting.

It’s hard to see what Truth Social has going for it without Donald Trump. The social media company was created by him. Why should even his supporters use the platform if he is posting elsewhere?

Truth Social is already struggling to attract users. Analytics firm Similar Web estimates the platform had eight million site visits in September 2022 - down from 11.5 million in July. For a social media company, that is tiny. 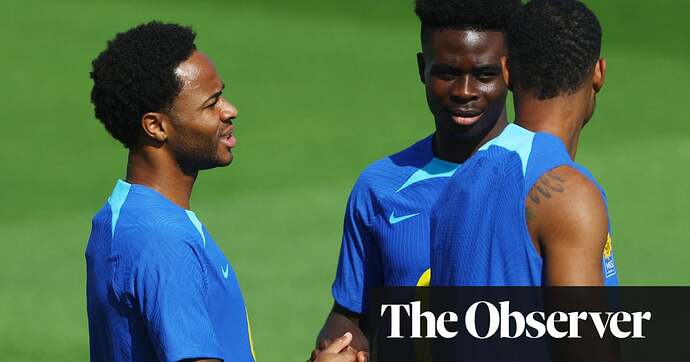 Twitter fails to delete 99% of racist tweets aimed at footballers in run-up...

Tweets hurling racist abuse at footballers, including the N-word, monkey emojis and calls for them to be deported, are not being removed by Twitter.

New research shows the platform failed to act on 99 out of 100 racist tweets reported to it in the week before the World Cup.

Only one was removed after being flagged on Wednesday, a tweet that repeated a racial slur 16 times. All the others remained live this weekend.

Meanwhile, someone won’t be coming back to Twitter as long as Truth Social is still an ongoing concern.

It would be as though NBC had to carry an announcement of what program was on CBS at the moment. It would promote his failing service, and give the finger to Twitter at the same time.

He’s another one I’ll have to mute on Twitter: 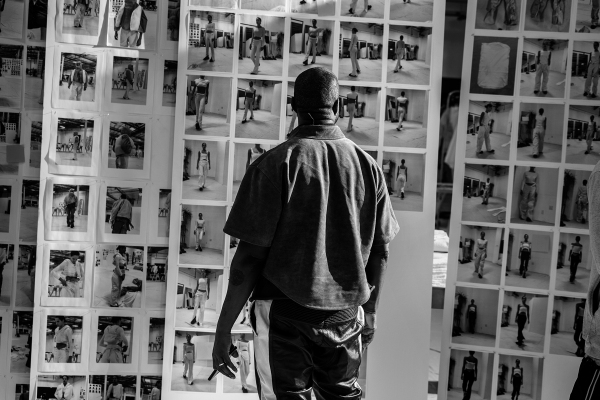 In the month since Adidas severed ties with West amid a hail of hate speech, more than two dozen former Yeezy and Adidas staffers have described to Rolling Stone an abusive office culture that left many of them fearing for their livelihoods. Behind the scenes, this celebrity boss did more than test the boundaries of professionalism: Former Yeezy and Adidas staffers and creative collaborators claim that he played pornography to Yeezy staff in meetings; discussed adult films and photos and showed an intimate photograph of Kim Kardashian in job interviews; and showed an explicit video and photos of Kardashian as well as his own sex tapes to Yeezy team members.

Now, a revelatory open letter by prominent former members of the Yeezy team insists that leaders from Adidas were aware of West’s “problematic behavior” but “turned their moral compass off,” raising questions about whether his corporate partner could have stepped in years ago. 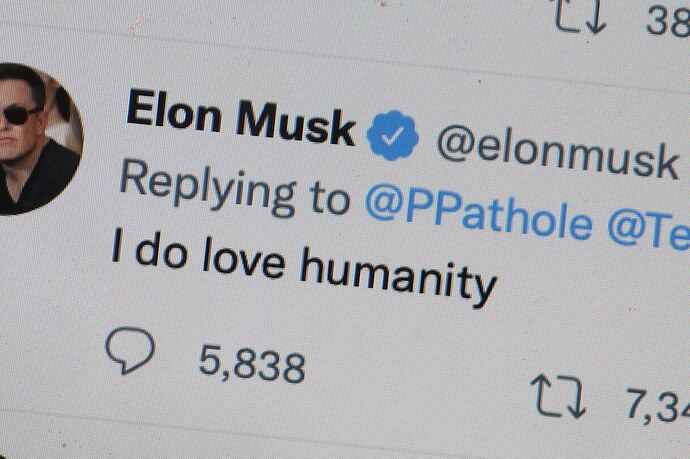 ELON MUSK’S TWITTER failed to stop the circulation of an antisemitic cartoon posted on the network by Russian diplomats drawing on a trope of Na*i propaganda by depicting Ukraine’s Jewish president, Volodymyr Zelenskyy, with a huge nose.

Despite pleas from Twitter users who objected to the anti-Jewish racism of the cartoon, the tweet remained where it was posted, on the official account of the Russian Embassy in London, without being deleted, contextualized, or restricted in any visible way.

Before Musk took control of the social network, tweets containing images that used racist tropes to attack individuals or groups based on their ethnic identity were routinely removed from the platform or made impossible to share.

Post-Dispatch is reporting today that St Louis mayor is terminating her Twitter account. Unhappy with recent developments after major participation. 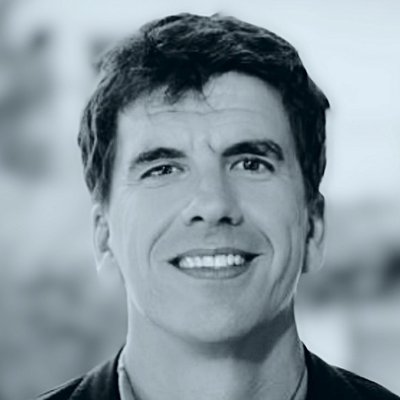 @pkedrosky
This is like bizarro world business management. No words. https://t.co/nidH4sCEv7 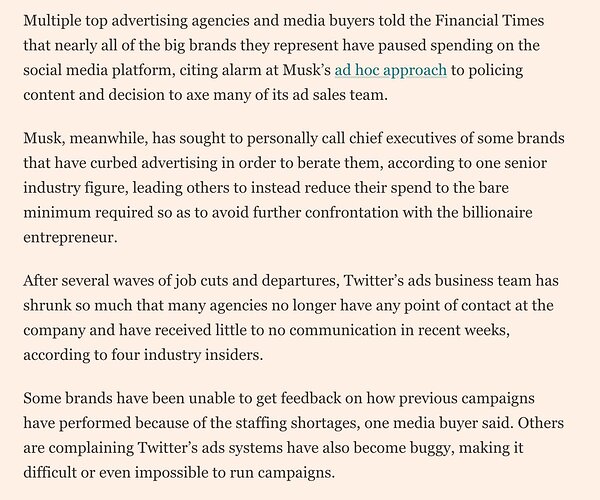 Twitter CEO Elon Musk said he would support Ron DeSantis if the Florida Governor chooses to run for president in 2024. 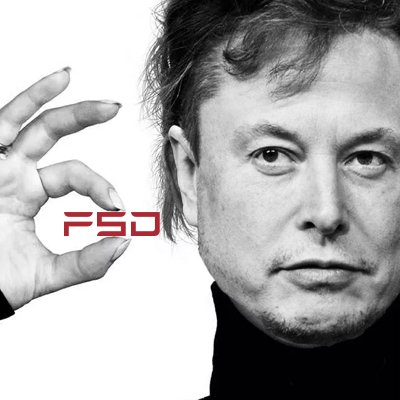 @yoloption
Former #SpaceX employee explains that $TWTR is a shit show because it doesn't have an intermediate layer of management that knows how to manage Elon to protect the company from him. Sounds pretty accurate. $TSLA $TSLAQ tumblr.com/numberonecatwi… https://t.co/bnNgU5ipfx 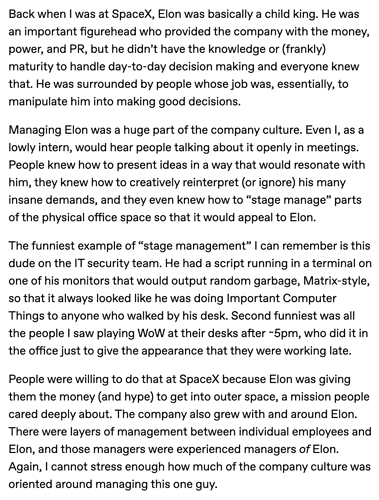 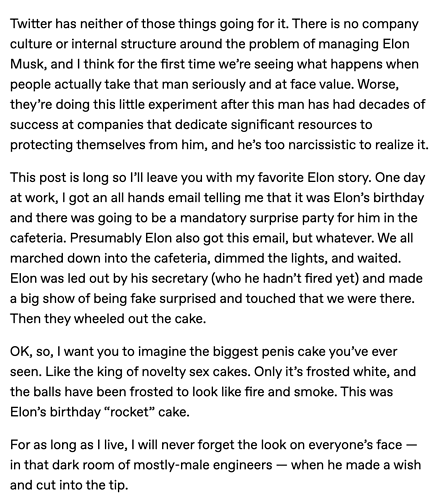 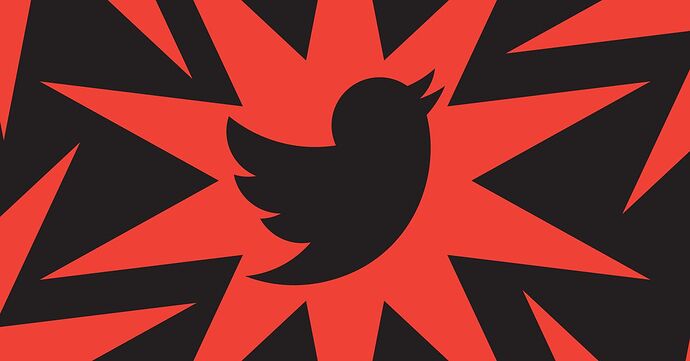 Blue check marks for people, gold for companies, and grey for governments.

Elon Musk says that Twitter’s check mark program could return on Friday, December 2nd, with a new procedure to verify individual identities in order to resolve impersonation issues. Musk described the new manual authentication process as “painful, but necessary.” Verified check marks will also be expanded with additional colors — gold for companies, grey for the government, and the original blue for individual accounts.

As it turns out, offering so-called verified check marks for an $8 monthly subscription without actually verifying identities wasn’t a brilliant idea. After Musk ignored warnings from Twitter’s own trust and safety staff, the platform’s paid Twitter Blue subscriptions rolled out and quickly resulted in some ‘verified’ accounts impersonating notable public figures and brands, driving away advertisers from the “high-risk” platform. Musk has since said that the company wouldn’t relaunch Twitter Blue until “we’re confident about significant impersonations not happening.” 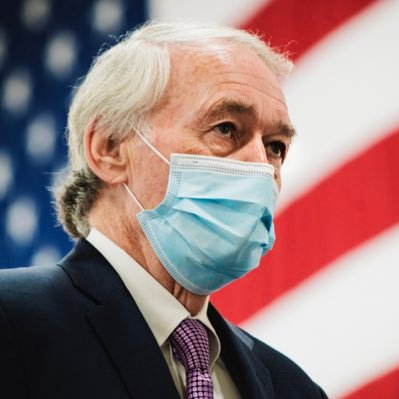 @SenMarkey
.@elonmusk could respond to my tweets but failed to respond to my letter by yesterday’s deadline and answer basic questions about Twitter verification. Congress must end the era of failed Big Tech self-regulation and pass laws that put user safety over the whims of billionaires. twitter.com/SenMarkey/stat…

A @washingtonpost reporter was able to create a verified account impersonating me—I’m asking for answers from @elonmusk who is putting profits over people and his debt over stopping disinformation. Twitter must explain how this happened and how to prevent it from happening again. https://t.co/R4r7p6mduP
← previous page