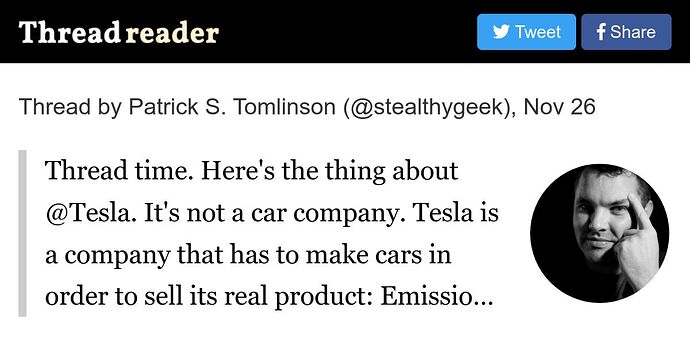 @stealthygeek: Thread time. Here's the thing about @Tesla. It's not a car company. Tesla is a company that has to make cars in order to sell its real product: Emissions Credits. Let me explain. Back in...…

Anyone who still beats that drum is at least a couple of years out of contact with reality.

I wonder why! What ax is he/she/it grinding?

I take that as a no.

Just curious, but what is inaccurate about the article?

what is inaccurate about the article?

In Q1 of last year, Tesla’s entire profit came from selling half a billion dollars of carbon credits to other carmakers.

I always hate “last year” and “this year” and “next year” references. They can be rather nebulous.

Tesla reports their regulatory credits separately in their quarterly updates. Looking at the most recent 4 quarters as of today (so Oct 2021 through Sept 2022), they had a significant bump up in those credits in the Jan-Mar 2022 quarter. In that quarter, the credits were 679 million and net income was 3.3 billion, or about 20% of their net income. On an annual basis, the credits are more like 11% of net income.

So they are important, but I’d hardly call the credits their biggest profit center. Sales of the cars themselves account for almost all of the rest of the profit. (Solar and batteries are a negligible part of profit - and may actually be a small loss after accounting for their share of operating expenses.)

In short, the article is based on a premise that is wrong.

Do you have a link for the quarterly reports? I would like to look at them. to see where Tesla is making most of its money. Thanks. 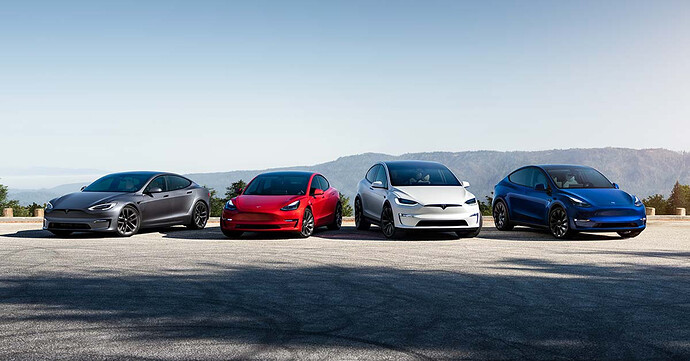 As an aside, if you do an internet search on company name Investor Relations, you will almost always get a fairly quick path to quarterly and annual reports. Might have to follow a link or two from the search result, but it should be pretty close.

Thanks tamhas and ptheland for the explanation and the link. I’m slightly more educated today than yesterday.

And that, my friends, is what is GREAT about our financial community here.

As they used to say… Fool On!
'38Packard

This is yet another example of lazy journalism. It is true that years ago, Tesla derived most of it’s bottom line from carbon credits (because they weren’t selling many cars, or making much of a profit from them yet). It is clear that this journalist simply “copied” old news to create a random article.

This is yet another example of lazy journalism. It is true that years ago, Tesla derived most of it’s bottom line from carbon credits…

What I said, “Anyone who still beats that drum is at least a couple of years out of contact with reality.”

This is yet another example of lazy journalism. It is true that years ago, Tesla derived most of it’s bottom line from carbon credits

Well, some people believe “lazy” and others believe “deliberately false and malicious”, likely because such assertions never get corrected by the folks who spread them, even after they are shown to be complete fabrications.

And even years ago the truth was stretched. The only correct way to back out regulatory credits would be to remove them from revenue and remove the taxes that were paid on that portion of revenue as well. But that latter step was always conveniently forgotten.