Europe burns 19 million bottles of sunflower and rapeseed oil every day in cars
www.greencarcongress.com/2022/06/20220623-te.html
A new analysis by European environmental NGO Transport & Environment finds that Europe burns more than 17,000 tonnes of rapeseed [canola] and sunflower oil every day—the equivalent of 19 million 1-liter bottles. This has contributed to spiralling food price rises as well as empty supermarket shelves in the wake of Russia’s invasion of Ukraine, the organization says. T&E has called on governments to prioritize food over fuel and end the use of crop biofuels now…

Recently, Indonesia temporarily banned exports of palm oil to stabilize local prices. At the same time Europe diverts significant amounts of palm oil (50% of the palm consumed in Europe) and soy oil (32%) to powering its cars and trucks…

The G7 leaders will be meeting in Germany from 26 to 28 June to, among others things, discuss global food security. This will likely pit several European countries in favour of some sort of restrictions on crop biofuels against the US which is pushing hard to increase biofuels production.

The Europeans have been using biodiesel for a number of years as the rental car we had in Spain 15 years ago could use either types of diesel fuel.

50 years ago my alma mater, the University of Rhode Island, used biofuel in its heating system because it reprocessed the cooking oil from the dining halls to blend into the regular heating oil.

The country of Brazil uses fuel derived from sugar cane instead of corn to make ethanol for its cars and trucks.

But unfortunately there are people who still believe the we will have petroleum “to infinity and beyond”.

Some point out the volume of petroleum used is huge compared to fats and vegetable oils. Using waste oils as fuels is better than disposal. But ability to replace petroleum is doubtful.

The country of Brazil uses fuel derived from sugar cane instead of corn to make ethanol for its cars and trucks.

Forty percent of the corn grown in the US goes to making ethanol.

Much of this growth in area and production is a result of expanding ethanol production, which now accounts for nearly 40 percent of total corn use. While the number of feed grain farms (those that produce corn, sorghum, barley, and/or oats) in the United States has declined in recent years, the acreage per corn farm has risen.

If you have ever traveled through the corn growing states of Illinois, Iowa, Minnesota and eastern Nebraska, the amount of farmland growing corn is extensive. Most of the rest goes to growing soybeans, which is mainly used in livestock feed.

Forty percent of the corn grown in the US goes to making ethanol.

Back in March, when the media first started nattering about food grain shortages due to the disruption of exports from Ukraine and Russia, I fired off an e-mail to one of my Senators suggesting the fuel ethanol mandate be suspended, so more land could be used to grow grain for food.

Instead, the POTUS shifted policy to increase the use of fuel ethanol. The reply I eventually received from the Senator had absolutely nothing to do with my proposal.

If you have ever traveled through the corn growing states of Illinois, Iowa, Minnesota and eastern Nebraska, the amount of farmland growing corn is extensive.

I went through the airport in Sioux City, Iowa, some 50 years ago. They had corn growing between the taxiways. 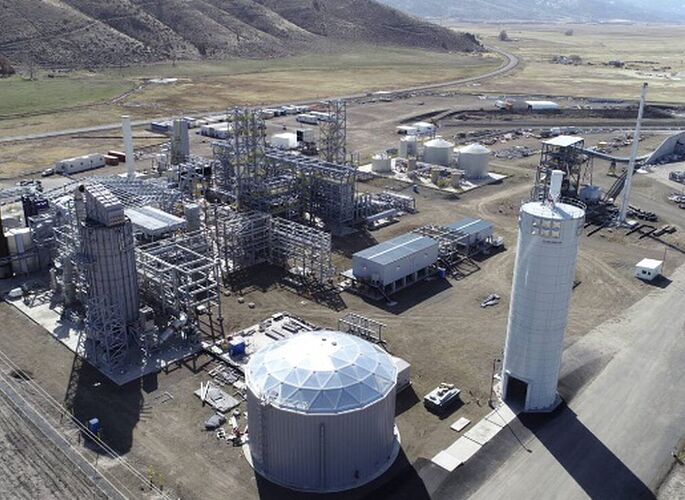 Red Rock Biofuels is at a halt, and backers defaulted on $300 million in bonds issued through the state of Oregon

A much-hyped but yet-to-be-completed aviation biofuels refinery in southern Oregon appears to be headed for foreclosure after backers failed to make principal and interest payments on some $300 million in debt.

Red Rock Biofuels launched efforts nearly a decade ago to build the cutting-edge facility in Lakeview but repeatedly ran into obstacles, even as project skeptics questioned its feasibility…

It’s not clear if a buyer would seek to complete the facility, repurpose it or deconstruct the equipment and use it elsewhere.