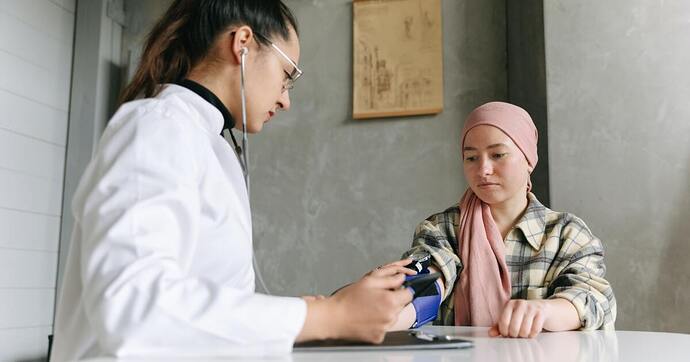 Cancer will be the top driver of healthcare costs in 2023: What employers...

Ellen Kelsay, president and CEO of Business Group on Health, reveals what employers can expect from healthcare costs in 2023.

Cancer will be the top driver of healthcare costs in 2023: What employers should know

The average cost employers pay for their employees’ healthcare will jump by 6.5% next year, amounting to more than $13,800 per employee,…most employers are prepared to cover 82% of employee healthcare …

The Business Group on Health named cancer as the top driver of employer healthcare costs, a spot previously held by musculoskeletal conditions. In fact, 13% of employers surveyed say they have seen more late-stage cancers impacting their workforce, and 44% predict they will see an increase in cancer diagnoses in the future. …

An estimated 64% of Americans deferred cancer screenings in 2021, according to the American Society of Clinical Oncology. …The U.S. Department of Health and Human Services found that specialty drugs increased by 43% since 2016 and accounted for over 50% of total drug spend in 2021. …[end quote]

Many people who deferred cancer screenings during the Covid years (2020-2021) ended up with advanced cancer that is very expensive and difficult to treat.

Whether or not you are an employer or employee, be sure to get your screening tests!

The increase of healthcare costs will impact profits at companies.
Wendy

I don’t know what kind of result that article was trying to achieve but it sounds like a misleading ramble. Cancer and especially cancer screenings are dramatically weighted towards older people not the young/prime of life, workforce demographic. How many cancers do they even screen for in young people that, if they took a year or two off, would become so prevalent it would be a the main driver of medical insurance rates? If cancer drives employer medical insurance spending it would seem almost nothing else is happening to people. It doesn’t add up.

Rising health care costs go along with our aging population. Plus the latest treatments such as monoclonal antibodies are effective but expensive. Yes, we expect insurance to pay for expensive life saving treatments.

One of the Indiana Jones movies has a scene where he is poisoned and asked how much he will pay for an antidote? How much are you willing to pay to save the life of a loved one? For most of us the answer is all we can raise.

Where does this end? How can we afford unlimited health care?

Statements are leaking out about how certain politicians want to “save” Medicare, Medicaid, and SS. I definitely interpret their use of “save” to mean cut.

Most of the retirees on TMF seem to be doing pretty good financially. Will these retirees still be doing good if Medicare is “saved” and they need to fend for themselves ? I don’t think so, but there might not be a need to speculate, the scenario could very well play out very soon.

( when people show/state their true beliefs, believe them, lol, that’s who they are, and that’s what they’ll do, if given a chance )

Will these retirees still be doing good if Medicare is “saved” and they need to fend for themselves ?

Social Security and Medicare are regarded by many as the third-rail of politics. I doubt that they have the votes to make significant changes. But adjustments may be needed to keep the programs affordable.

Medicare For All sounds good but will be very costly. How can we pay for that? Its a step in the wrong direction.

I still favor a universal health care system that would cap benefits at say $5000/yr. Such a program is affordable and means care is available for prenatal care and kids cuts and bruises. This alone would probably significantly improve health among the poor.

Medicare For All sounds good but will be very costly. How can we pay for that?

That one is easy. The money currently being paid to private insurers by both the employer and the employee just gets diverted to medicare. In fact you could probably knock 30% off the amount because that currently goes to health insurance profits. I’d guess that it would be even greater savings with so much unnecessary administrative overhead also gone.

The money is already there. It just needs to be switched to a different pocket.

Medicare For All sounds good but will be very costly. How can we pay for that? Its a step in the wrong direction.

As Spiffy noted, looking at the data, Shiny-land vs any other industrial democracy, a national health plan would cost us less than we pay for health care now, with better outcomes. Opponents point their fingers at the trouble the UK NHS is in, but look who has been running the UK since 2010. We have discussed the uses of a “set up to fail” strategy before. The question isn’t how to pay for a National Health plan. The question is why do people bend over and pay so much more for the shiny system?

I hope you’re right, Paul, but I have zero confidence in some of these irrational people behind the “save” effort. I’m guessing that the 60+ crowd will keep it, but pay more. That leaves younger Americans behind the 8-ball. these younger Americans are going to be older Americans in the not too distant future, it happens to us all, lol. People need to start making rational choices as to what politicians to support. It’s easy, just vote against any pol that makes it clear they’re going to hose you.
But emotions rule the landscape in America,so I’m definitely seeing the odds of a very negative Medicare “save” going up and up.

Statements are leaking out about how certain politicians want to “save” Medicare, Medicaid, and SS. I definitely interpret their use of “save” to mean cut.

Cut the Congresscritters’ health care benefits so they are the same as the average American’s Medicare benefits. FIREWORKS !!!

But emotions rule the landscape in America,so I’m definitely seeing the odds of a very negative Medicare “save” going up and up.

I think I have offered before (with tongue firmly in cheek) the “plan”: cut Social Security outflow to match cash inflow, and escalate Medicare premiums until they entirely consume the SS benefits.

But, that was before the worker “shortage”. The new dystopian plan is to only have SS and Medicare as it is now for people too feeble to work. For the able-bodied 60-70-year-olds, impose a work requirement, like Michigan tried for Medicaid a couple years ago, to receive the Medicare benefits they paid for, and deny them the SS pension they paid for.

The ground work for this is being laid with blather about “the dignity of work”, lectures about “personal responsibilities” and glowing comments about one 90 year old or another, who is still “working”. Those on Medicare have probably noticed, the routine checkups at the Doc are as much about answering a flood of questions that deal with mental and emotional well-being. Easy way to amass “data” that can be twisted into making a case that people are better off if they are working to make a “JC” richer, rather than doing what they want to do.

With millions of old phartz forced back into the workforce, paying in to the system, instead of drawing benefits out, then the employer part of the payroll tax can be repealed, so the “JCs” can stick that money in their pocket, where they put the money from the employee pension and medical benefits they took away before.

Then the pols can pat themselves on the back for both “saving SS and Medicare”, and solving the shortage of workers desperate to do anything for any sort of trivial paycheck. The Michigan scheme to impose a work requirement for Medicaid was explicitly about forcing people to take lousy jobs that the “JCs” could not otherwise fill at the lowest possible wage. The bill’s sponsors openly admitted that.

I think I’ll use the bone spurs excuse if the JC’s surrogates try to send me back to work. There is case history that it is a valid excuse , lol.

I’m guessing that the 60+ crowd will keep it, but pay more.

It’s easy to raise the eligibility age and then reduce benefits or increase payments for those who sign on before that age. Payments can be either premiums paid or co-pays.

When push comes to shove, decisions will be made. And these are more subtle and can be timed to take effect long after the term of those standing for re-election.

When Medicare runs out of funds, funding out of general revenue seems doubtful. Running up the national debt not popular. Raising income or trimming benefits are most likely.

I think I’ll use the bone spurs excuse if the JC’s surrogates try to send me back to work. There is case history that it is a valid excuse , lol.

You have to be a “JC” for excuses like that to work. The world is composed of “JCs”, and those whose only function is to make the “JCs” richer. If you can’t be used to make a “JC” richer, you go to Carousel.

When Medicare runs out of funds, funding out of general revenue seems doubtful. Running up the national debt not popular. Raising income or trimming benefits are most likely.

Actually, much of Medicare is funded from General Revenue now.

Part A, in patient hospital, nursing facilities and hospice, are paid by the payroll tax and tax on Social Security benefits.

Part B, Doc office visits, and Part D, pharma benefit, are funded about three quarters from General Revenue and one quarter from premiums.

So, Congress could simply defund Parts B and D, to cover another big tax cut for the “JCs”.

My generation in total has never known up from down. But we seem to be very forceful in our opinions anyway. Shame we could have done something for this world instead of robbing it.

Costs are reverting to what they should be. Plans to have cheap brown female labor in the nursing homes wont work out. Not meaning to be decent in the first place is now expensive.

Plans to have cheap brown female labor in the nursing homes wont work out.

Nurses trained in the Philippines are welcome many places. They are far better than empty slots or untrained personnel. You ring for a bedpan and no one shows up. How can that be good for anyone?

The operative word is “cheap”. Not brown, not labor, not female.

people are deciding not to be used

Immigrants would be filling the low end of the employment spectrum. But with immigration cut off, there no longer is a source of relatively less expensive labor.

“relatively less expensive labor”, of course that will always exist.

There are a lot of American businesses that will fail. Over time people will find their way into more substantial employment. Free markets at work.

Subsidizing poor employers costs this country a great deal. I get using people seems like a short cut.

If we do allow visas for the jobs being discussed it needs to be at relatively expensive labor rates. We have an economy to care about beyond someone saving their money.

Which insurer earns 30% of premiums in profit? Because I want to invest into that company!