China: All autocratic leaders need to be surrounded by love

Like reading tea leaves, interpreting Chinese body language can easily be misread. That said, there was an excess of body movement during this week’s Communist Party romcom: 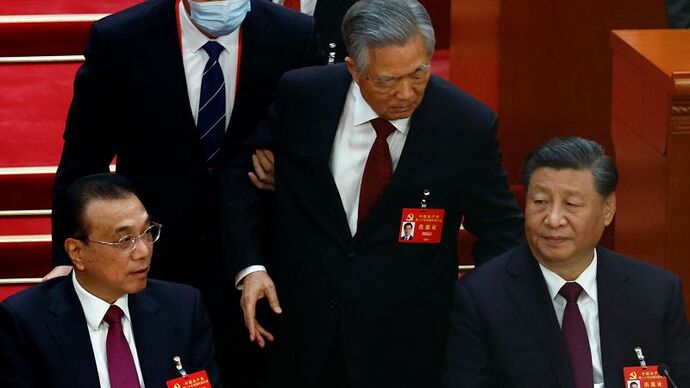 China's former top leader, Hu Jintao, was unexpectedly led out of Saturday's closing ceremony of the Communist Party Congress, in a moment of drama during what is typically a highly choreographed event.

China’s former top leader, Hu Jintao, was unexpectedly led out of Saturday’s closing ceremony of the Communist Party Congress, in a moment of drama during what is typically a highly choreographed event.

Hu, 79, was seated in a prominent position at the front table in the Great Hall of the People in Beijing, directly next to his successor, current leader Xi Jinping, when he was approached by a staff member, video of the meeting shows.

While seated, Hu appeared to talk briefly with the male staff member, while China’s third most senior leader, Li Zhanshu, who was seated to his other side, had his hand on the chair behind Hu’s back.

Hu then appeared to rise after being lifted up by the staff member, who’d taken the former leader by the arm, while Kong Shaoxun, head of the party’s secretariat came over. Hu spoke with the two men briefly and initially appeared reluctant to leave.

Hu was then escorted by the two men from his seat, with the staff member holding his arm, as other party members seated behind the main table looked on. The circumstances surrounding Hu’s exit are not clear.

On his way out, Hu was seen to pause and appeared to say something to Xi and then patted Premier Li Keqiang on the shoulder. Both Xi and Li appeared to nod. It was not clear what Xi said in reply.

At one point, while Hu was still seated, Xi appeared to place his hand over a document that Hu was attempting to reach for preventing him from doing so.

Jefferson and Hamilton did not get violent.

Long after Aaron Burr dueled Hamilton and it was seen as political but it was not a power grab.

Xi is one of the smallest men on the planet. People like Henry Kissinger think he is cool, and live in awe of such power. It is the sickest side of power.

Xi is forcing failure upon China.