Every METAR knows by now that the markets rejoiced on Friday because CPI inflation was ONLY 7.7%, a level that would have caused disbelief and horror in 2021. But it was a couple of tenths of a percent below the market’s expectation, so – Party Hearty!

The Fear & Greed Index popped into Greed. The trade was risk-on as stocks and junk bonds popped while the USD dropped. The entire Treasury yield curve fell except the shortest duration, controlled by the Fed.

The entire market reacted as if one month of falling inflation will be enough for the Fed to abandon its monetary tightening. The market ignored the Fed’s clear message that they will not loosen until inflation is reliably down to their target of 2%. Even if the Fed only raises the fed funds rate 0.5% in December (as the markets expect) instead of 0.75%, the real fed funds rate is still negative. They have a long way to tighten to achieve a restrictive positive real fed funds rate.

And it is likely that the slowing economy that the Fed wants is coming. 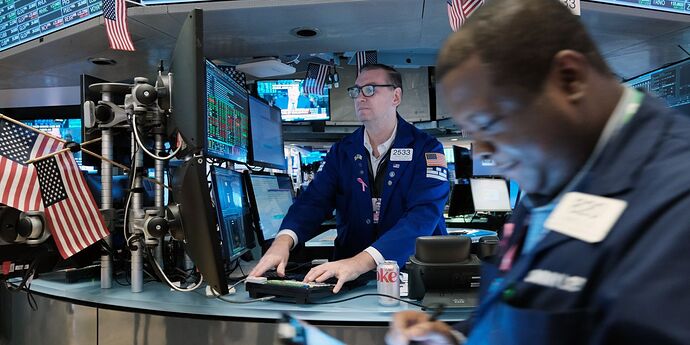 Even as markets delight in the prospect of smaller rate increases from the Federal Reserve, earnings are becoming more of a threat.

Even as markets delight in the prospect of smaller rate increases from the Federal Reserve, earnings are becoming more of a threat

…
Wall Street analysts have been slashing profit forecasts at a pace rarely seen outside recessions — and still seem optimistic. While recession is increasingly the consensus among economists, risky assets such as shares aren’t yet pricing in significant risk to earnings.

The 12-month forward prediction for S&P 500 earnings per share is down more than 3% since June, with next year’s forecast down 8%. The only significantly bigger drop outside a recession was in 2015, when the Fed was moving toward its first rate rise in nine years.

Reality is only just beginning to set in, though. Earnings are still forecast to hit a new high next year, up more than 4% from this year even after the pullback…

So what are the risks of recession? High, according to economists. The most interest-rate-sensitive sectors are already showing weakness, led by housing; the U.K. and Europe are on the brink of recession; and even after slight relaxation of the rules, Covid lockdowns are still stunting China’s growth. … [end quote]

The U.S. hasn’t had a good, old-fashioned business cycle recession in a while. Those were driven by orders falling while production stayed high, leading to high inventories. Then the company would slow production and lay off workers as they gradually sold off excess inventory.

The inventory-to-sales ratio is climbing. The Covid shipping bottlenecks eased in mid-2022, bringing in goods from 2021 when normally manufacturers would have been working on the holiday goods for 2022. Even though new orders are still strong the level isn’t growing. 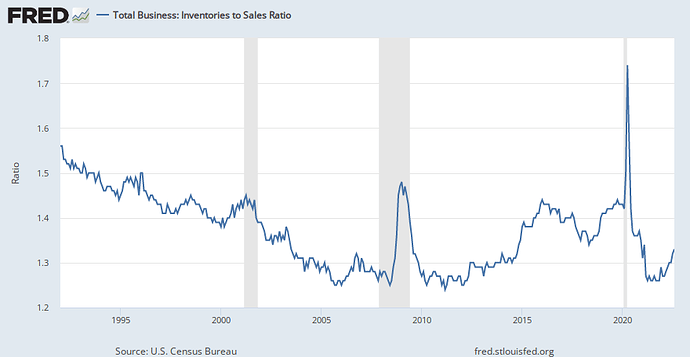 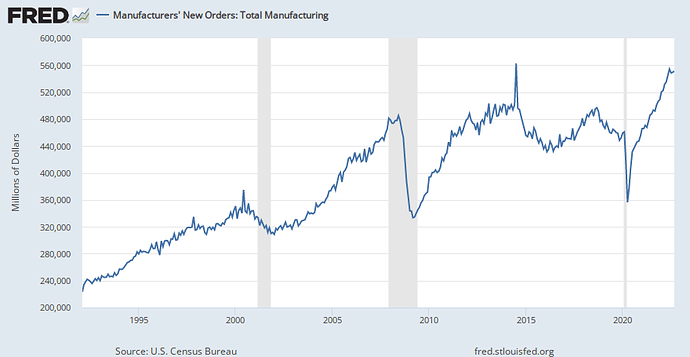 The ISM Services PMI fell to 54.4 in October of 2022 from 56.7 in September, and below market forecasts of 55.5, pointing to the slowest growth in the services sector since a contraction in May of 2020. There is a clear downtrend. TradingEconomics.com forecasts a recession in 2023.

High inflation, rising interest rates and a slowing economy = stagflation. All METARs “of a certain age” will remember this from the 1970s. The Fed loosened when the economy slowed and inflation came roaring back. (Driven by rising energy prices.) The stock market suffered a series of wild swings but the overall trend was down. The stock market bottomed in 1982 after the terrible recession of 1980-82.

Captaincs played Friday’s “Bull Trap” brilliantly with options. If the markets follow the 1970s example of alternating highs and lows this could be a good (though risky) play.

The METAR for next week is sunny, since the momentum will probably carry through from Friday. The darker forecasts will probably take a while to manifest. Medium term, recession. Long-term, recovery. 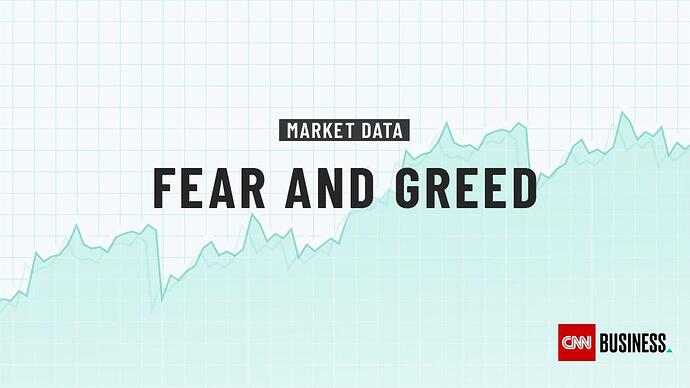 Great write up as always.

I bought my 1450 square foot 2 bedroom condo a little over 2 years ago. 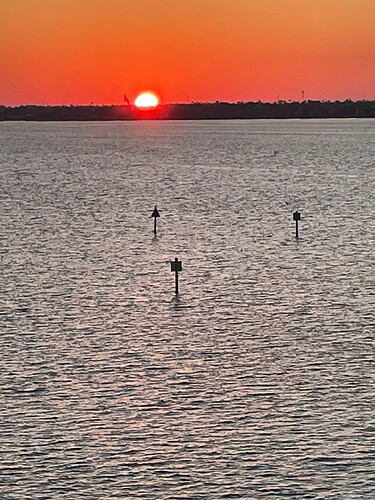 This is my morning view. I paid about 275k for it. We considered selling it and buying a house in Nacogdoches and a small efficiency in Panama City. The small efficiency would have : No view. no elevator, no club house, no pool, no gym, and would not be a modern built to latest code unit.

There are zero townhouses or condos listed in Nacogdoches. There are a couple of nice cottages and few 50 year old brick homes under 300k, but not much.

I point this out because it indicates to me that the real estate market, at least in my
price range and locate is frozen solid. Nothing is for sell, nothing is selling and new build permits are stopped.

Right now contractors are still busy, but new starts are stopped. I perceive that the construction industry is a lot like Wile E. Coyote. 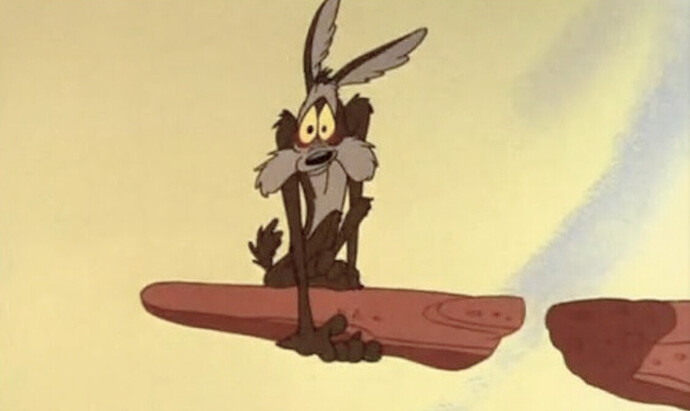 When this hits bottom, everything, takes a huge hit.

Food service demand falls, don’t need to eat out if you don’t go to work.

The amount of non activity is first seen in permits and loan applications. Next will be the declining earnings of real estate and insurance agents. Then you will see overtime in the construction industry fall.

Then earnings at the big box construction stores fall.

Then it will get real.

Stocks to yield curve: „This time it will be different!“ 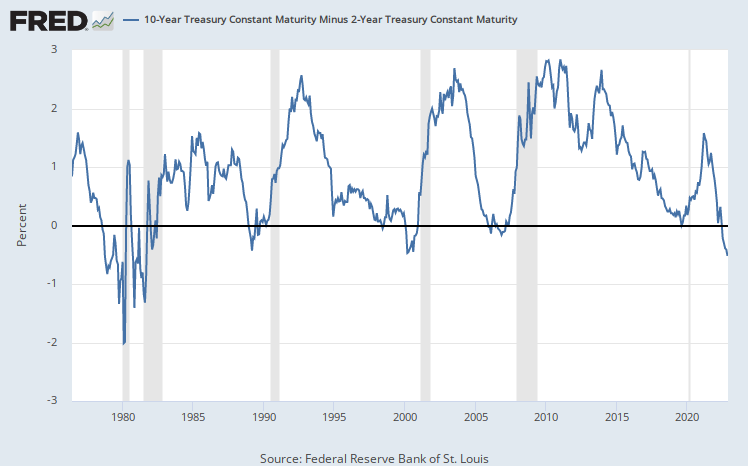 Where is the ‘stocks to yield curve’?

Interesting day on the Street, eh? Bubblevision’s web site was touting a Fed official offering that the Fed may slow the rate of rate increases, and the market flew. Wonder what caused the markets to tank in the last hour?

Where is the ‘stocks to yield curve’?

Most of the time, the 10Y yield is higher than the 2 Y yield (a positively-sloped yield curve). However, look at the vertical gray lines that represent recessions – times that stocks usually fall in value.

The 10Y-2Y chart shows that the difference consistently becomes negative within a few months ahead of recessions. That is a clear predictor of falling stock prices.
Wendy

True, it’s not a yield curve. At the same time, I was wondering where the ‘stock’ part came in.

If you look at 1980 it was not much of a recession time wise. The prior recessions during the demand side part of the cycle were shallower than the supply side recessions.

Yes we will have a recession, could have declared one this year almost, but a shallow recession. The current lay off headlines are in tech. The workforces are massive and these layoffs are good sized but not the soup of bankrupt companies.

If you look at 1980 it was not much of a recession time wise.

If you look at 1980 it was not much of a recession time wise.

I was working in industrial northern New Jersey during the recession of 1980-1982. It was a very deep recession where many industrial plants were closed forever and the workers summarily fired from the only jobs some of them had ever known. Whatever the charts say, this was not two shallow recessions but one very long, very deep recession with high unemployment for a long time afterward. The high-paying industrial jobs that were lost all over the U.S. have not returned to this day.

this was not two shallow recessions

Agreed. I worked for a small capital equipment manufacturer in MN from 1980-1985. I set up new systems (inventory, purchasing and EOQ, and more) that allowed the business to be profitable 1982-1985 (the owner told all the employees each year). Meanwhile, a number of larger (multinational) competitors went bankrupt or were purchased by then-trendy conglomerates–which went splat!! in the 1990s to early 2000s.

Yeah I knew I was going to have a hard time getting that statement over the plate. Volcker was appointed in 1979. He crashed the economy. We all agreed it had to be done.

I was trying to make a larger point about demand side econ that the recessions were mild. The problem with the 1980 recession was Volcker was lighting up some supply side mojo.