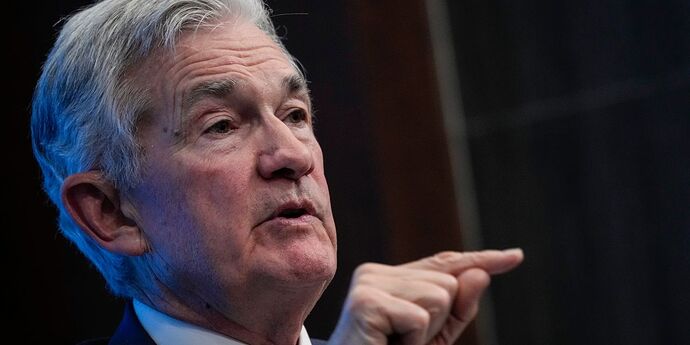 Brisk wage growth could lead officials to consider raising their policy rate above 5% in 2023 to fight inflation.

Brisk wage growth may lead officials to consider raising policy rate above 5% in 2023 while approving a 0.5-point increase in December

Federal Reserve officials have signaled plans to raise their benchmark interest rate by 0.5 percentage point at their meeting next week, but elevated wage pressures could lead them to continue lifting it to higher levels than investors currently expect…

Most officials in September penciled in rates rising to between 4.5% and 5% next year. That landing zone could rise to between 4.75% and 5.25% in the new projections…

He outlined two possible strategies for proceeding. One would be to quickly raise the fed-funds rate well above the 5% level broadly anticipated in financial markets and then lower it right away if it turns out they have gone too far. Another would be to “go slower and feel your way a little bit to what we think is the right level” and then “to hold on longer at a high level and not loosen policy too early.”

The Fed has a history of raising the fed funds rate rapidly, holding it constant for a short time and then dropping it rapidly and sharply when a recession starts. It would be much better for business, investors and the economy if the Fed would do what it did in the 1990s – find a level for the fed funds rate that can be constant for a long time with small tweaks up and down to nip inflation in the bud or gently stimulate.

But basically to be neutral – to avoid strongly stimulating or slowing the economy.

Fed Chair Jerome Powell says that the neutral rate is his goal once inflation is brought under control.

Since Fed policies take a looonnnnggg time to affect the real economy it is wise to slow the rate of increase and observe the effects. But the wage-price spiral that is developing currently is reminiscent of the 1970s and can easily lead to stagflation.

The Fed severely underestimated the danger of inflation in 2021. I think they might be underestimating the difficulty of controlling it now.

The target fed funds rate from the FOMC (the “dot plot”) has gradually crept upwards over the past year. There is no guarantee that the Fed will stop at 5% if inflation continues high. 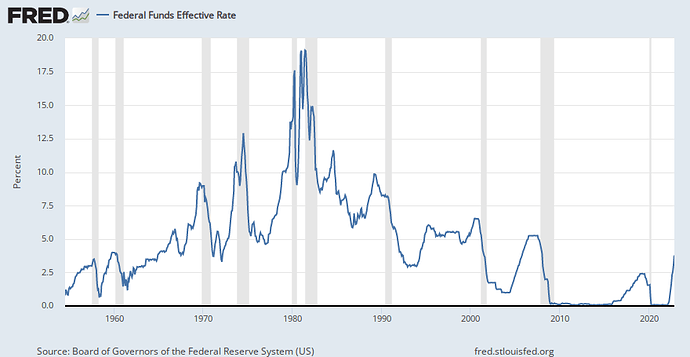 That falls short of your neutral rate compared to inflation…??

The longer end of the yield curve is the story. Odds are it gets ugly.

The longer end of the yield curve is the story. Odds are it gets ugly.

@Leap1 what do you mean by this? Are you predicting rising or falling yields at the long end of the yield curve?
Wendy

The US paper is being sold off in Japan by the BoJ and Yellen/Powell are carefully looking for a spiraling of the selling. The Japanese insurance has several major companies expecting to sell their US paper by the end of March.

The EUR is appreciating. I can not find stories on the European central banks selling US paper but do not be surprised.

The Yen trade is very profitable. That is why the Japanese institutions are selling their US paper. The EUR trade is more profitable.

The Yen trade is very profitable. That is why the Japanese institutions are selling their US paper. The EUR trade is more profitable.

(I know the answer, but it would be very instructive to you to find the answer as well)

(I know the answer, but it would be very instructive to you to find the answer as well)

I am not playing. Out with it or drop the topic.

Obviously you looked and I did not. Instead of being combative discussing things honestly.

I am very combative because of all the misinformation that has racked up $31 trillion in federal debt while denying American citizens. You have zero excuse.

You have entirely missed the point. That is typical when we discuss economics.

It is not what have they sold. It is what will they sell?

I have been carefully couching my words as “might”.

Yellen and Powell are on guard that this situation spirals out of control. There are plans to buy the long end of the curve if need be.

PS I did look, and realized just how little thinking you do. But then again I have been following and posting this for the last five months. It started with Yellen expecting this situation to spiral and a month later Powell was on the same page. I guess that is news to you.

Instead of being combative discussing things honestly.

I am very combative because …

How to make friends? Do as I say not as I do?

How to make friends? Do as I say not as I do?

When someone buys into lies…where we leave 30k people per year to die as uninsured or underinsured…where we hear just how bad a$$ed they are for buying into the lies of supply side econ…who would want them as a friend? What sort of selfish person is that for a friend? Me Me Me an entire generation of who cares about anyone else?

If you want friends take care of others and this country.

PS the Millennials and the Zs just got the hearing aide stuff through congress. It was not the boomers. That could have been done 20 or 25 years ago by us. We just have very little to go on as people en mas, the boomers. Just not much to like.

I am very combative because of all the misinformation that has racked up $31 trillion in federal debt while denying American citizens.

Key point not mentioned: In Jan 2001, the US National Debt was expected to be paid off before 2010.

Key point not mentioned: In Jan 2001, the US National Debt was expected to be paid off before 2010.

In 1981 we had all the promises. Just cut taxes and the economy will grow the debt will be cut. Promises. The worst part is watching people congratulate themselves for buying into four decades of lying.

The promise in 1981 was going forward. The promise in 2000 was going forward. But the Clinton Greenspan team deregulated the banking sector. A recipe for disaster. Plus in 2000 the deficits were cut but much of that was not based on taxing the right bracket or corporations to make it work, some of it was, but much it was based on interagency debt owed back to the SSA.

It is not what have they sold. It is what will they sell

There are not even rough numbers in the press. The problem is many of the Japanese institutions have plans to up their selling by March. It seems there are also Europeans probably doing the same.

The reason is to buy the JPY and the EUR. The companies based in those locations need an appreciation in their currencies to cut off inflation. If that was all there was it is actually healthy. But the selling of US paper can spiral.

I think the FED economists would have an idea of what to expect. I have not tripped over to the FED website to see if that is published. It might be.

But the Clinton Greenspan team deregulated the banking sector.

Money owed to SSA was irrelevant as well.

But the Clinton Greenspan team deregulated the banking sector.

We are back to supply side econ is monetary. Clinton failed on the fiscal side of policy making.

The Clinton economy had slow economic growth. Never a single year of over 5% real GDP growth. It was not much to write home about. We outsourced a lot of our heavy industry during those years.

Clinton’s growth rate was a failure.

The FED printed a lot of money for Y2K or the budget never would have balanced.

There are not even rough numbers in the press.

Well, the Federal Reserve is quite open about their actions. They explicitly say in their recent meeting notes that they are selling, or allowing to mature, $95 billion per month of bonds they own (some treasury, some MBS). At the $95B/month rate, that comes to $1.14 trillion for 2023 (plus, of course, all the bonds they sold and allowed to mature, through 2022, about $500B or so). So we know what the Fed plans to sell in 2023. And can see that the Fed plans to sell, or allow to mature from mid 2022 when they started selling through the end of 2023, a total of roughly $1.6 trillion of bonds they hold.

Now the question is - what do you think the amount of US bonds that the Japanese will sell through the end of 2023?

I have to admit that it’s a trick question. There is no way that Japan can sell more than the Fed will sell … because in total they own less than the Fed will have sold by the end of 2023! Japan only owns about $1.2T of US treasury bonds, and possibly less than that after some recent sales.

If you doubt the above numbers, here’s a recent press release from the Federal Reserve that states them quite clearly.

Japan only owns about $1.2T of US treasury bonds, and possibly less than that after some recent sales.

Thinking out loud the Japanese have begun to sell. The Europeans probably are following if you look at the appreciation recently of the EUR. The Chinese may follow because as the USD depreciates the RMB peg shifts. While Yellen cited the Japanese it may be several parties that concern her.

Not debating the numbers you are citing just that is not the important factor in how much the FED would buy of US paper next year.

BTW while the currencies depreciate and appreciate against each other as interest rate rise internally to their own economies the currencies will buy more or appreciate. This puts pressure on commodities regardless. That can included gold and oil.

Not debating the numbers you are citing just that is not the important factor in how much the FED would buy of US paper next year.

You ARE debating the numbers. The Fed said (and I said) that they are planning to sell $95B of US paper per month. And you just said that the Fed will be “buy[ing] US paper next year”.