The following is my take on DDOG’s Q3 FY2022 results which were announced yesterday. This will be included in my next portfolio update, but, since I won’t post another portfolio update until then end of November, I’m posting the DDOG take here now:

Going into the Q3 result, I had some concerns about DDOG in the short-term. First, DDOG being usage-based could be cut back on relatively easily by customers as occurred during Q2 2020. In light of the increasing trend to optimize spend by customers, DDOG could be particularly vulnerable. During Q2 DDOG first noticed that some existing customers began to slow their usage growth of Datadog products; the worry here would be that this trend would continue or worsen. I had considered reducing my DDOG position prior to Q3 earnings, but I ultimately decided against that action.

DDOG’s Q3 was better than I expected. The existing customer usage growth deceleration was similar what DDOG management described in Q2 but better than what the Company saw during the COVID-19 slowdown in Q2 2020. In addition, the ARR growth slowdown was mostly limited to consumer discretionary customers (mostly in e-commerce and food and delivery) with the affected customers representing mid-teens (call it 14%) of DDOG’s ARR. This doesn’t sound nearly as bad as I thought it could be, and let’s hope the impact to existing DDOG customer spend doesn’t spread more broadly. While revenue growth continued to decelerate, it remained above 61% in this increasingly tough marco environment. The other key performance indicators were mostly solid. Customers continued to adopt new modules with nice upticks is the percentage of customers using 4+, 5+, and 6+ modules (80%, 40%, and 16%, respectively). Churn remained unchanged in the mid- to high-90s demonstrating that customers are not leaving DDOG. The rate of net customers and net new $100K customers slowed but the Company reported a strong sales pipeline for both new customers and expansions heading into Q4. Overall, the business appears very heathy with great long-term prospects. Management certainly thinks so because they are continuing to invest heavily into future growth and opportunities by adding to both S&M and R&D during Q3; by comparison, many other companies are announcing layoffs and belt-tightening. DDOG is also putting their R&D resources to good use as shown by the large number of new product enhancements announced during Dash. While there many be some tough quarters ahead, DDOG is a company that should sail through this storm and come out relatively stronger. This Q3 report certainly quashed any desire to trim my position. Position size is currently 16.6% allocation, my 3rd largest behind SNOW and CRWD.

@GauchoRico My take on their Q3 earnings report is also in line with yours.

Looking at the trend lines in the chart below: 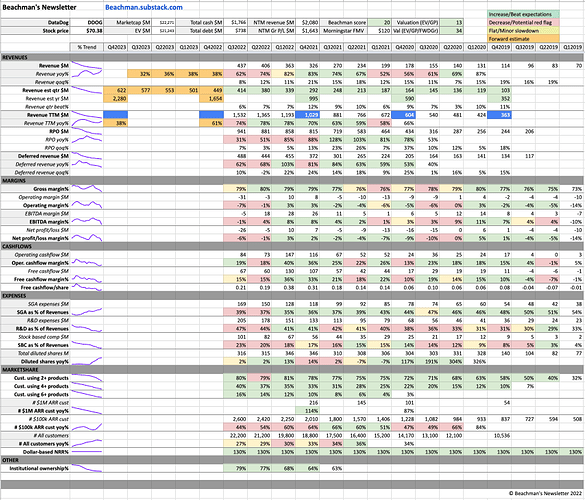 DDOG continues to cement its position in the cloud infrastructure industry as one of the leading cloud solutions provider. Their solutions work well with all three hyperscalers’ cloud platforms (Amazon AWS, Microsoft Azure, Google Cloud) as well as at customers’ on-prem installations. When cloud growth is strong, this is a tailwind for DDOG . When cloud spend is challenged, as recently reported by AMZN, MSFT and GOOG, DDOG’s diverse footprint in on-prem client installations becomes an advantage. Their Q3 earnings report depicted these very barbell strengths, keeping the company on track to not only survive these challenging times, but also come out of them bigger, stronger and better.