Gotta love Jamin Ball. If you don’t subscribe to “Clouded Judgement” and/or follow him on Twitter already, you should. Best I have seen in collecting and posting info on majority of the cloud/saas/tech companies followed most heavily on Sauls and throughout TMF. 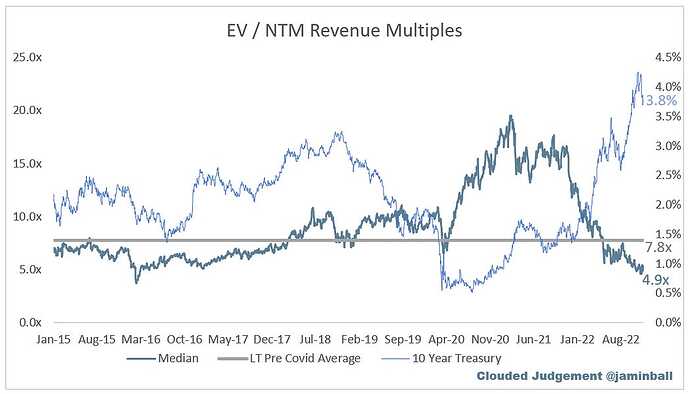 Every week I’ll provide updates on the latest trends in cloud software companies. Follow along to stay up to date! Can You Beat the Market Investing Businesses With in 10x+ NTM Revenue Multiples? This week I saw the below tweet and it got me thinking...

What he is basically looking at, is whether stocks that traded greater than 10x NTM revenue went on to be good investments.

He looked at 2015-2020 (pre-covid) and concluded that only (5) had greater than 40% CAGR. Interesting to me, is that I averaged over 40% CAGR during that period (as did a lot of others during a dart-friendly bull market) without being in most mentioned.

I was the first to post about one of these (Zscaler) prior to their IPO and while I did make some money in various trades, I never went all-in as they IPOd fairly expensive (at the time 30x was unheard of). Others mentioned you will have heard of, and are Saul stocks, at one time or another.

The lower the valuation and earlier you can get in, the better. This isn’t rocket science.

Thanks Dreamer. He’s got he new subscriber.

he lower the valuation and earlier you can get in, the better. This isn’t rocket science.

That comment does not match his conclusion. To wit:

Couple interesting callouts for me:

the comment on “lower the valuation and earlier you get in, the better” was my (consistent for a while now) conclusion. Simply means getting in at 8x or 10x or 12x is still better than blindly jumping on 30x and 40x multiples simply because they have the best growth metrics.

And Jamin’s comments take into consideration CAGR of 10% or 20%, which Saul obliterated for decades before SaaS ever existed.

My point being, growth/tech/cloud at high multiples doesn’t seem to have any evidence of being better than investing in TTD when Bear thinks it is a bad idea in 2018 or NVDA in 2015/2016 when most don’t have a clue how rapid the use of GPU’s in big-data/ML use cases and datacenters was becoming. Or even a beaten-down SPG during covid, or even CAKE compared to SaaS poster-children like ZM.

Anyone notice that DDOG only fell into the 20% CAGR bucket? Best metrics out there at moment…and still a relative dud since about May 2020. Essentially, if DDOG didn’t have the covid bump, they would basically be a wash since IPO. And I have news for you…still plenty of time for DDOG to retrace some of those covid gains. Already gotten into the 60s…50s isn’t impossible in coming weeks/months.

So, yeah, “the lower the valuation and the earlier you can get in, the better.”

Bottom line is, when an investor bought in. Did they catch the parabola or not? AND then get out before the '22 crash?
Or, like so many disappeared denizens, did they get sucked in by the lure of the parabola near the top, and get taken to the cleaners earlier this year - to swear off high-growth stock investing (at least until the next sector bubble) forever?