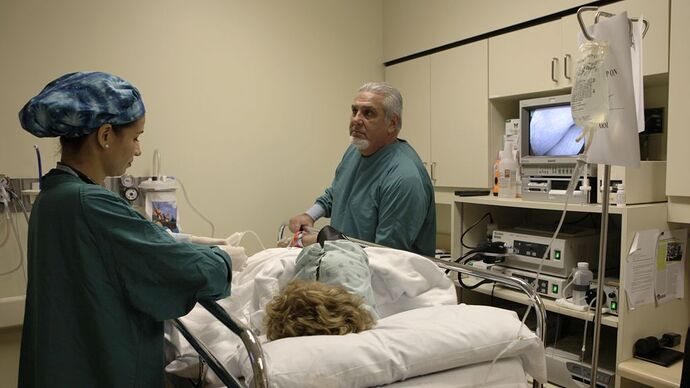 “This study provides clear data that it’s not as simple as saying, ‘Colonoscopy is the most sensitive test, and therefore it is the best.’ It still prevented cancers.”

The results are incongruent with some past investigations in other colon cancer screens. “We know from other screening tests that we can reduce cancer mortality by more than this,” said Jason Dominitz, the executive director of the national gastroenterology and hepatology program at the VA who wrote an accompanying editorial in NEJM and didn’t work on the trial. Sigmoidoscopy, which only examines a smaller portion of the colon, has been shown to reduce colon cancer mortality in randomized studies, Dominitz pointed out. “Colonoscopy is sigmoidoscopy and more, so you’d think it can’t be less effective than sigmoidoscopy,” he said.

But nuances abound in interpreting the data, Dominitz said. For one, a minority of participants who were invited to colonoscopy actually showed up for one. That may have diluted the observed benefits of colonoscopy in the study. Cancer treatment has also progressed over the last couple of decades, too, and the study only had 10 years of follow-up thus far, both of which would make it harder to see a mortality benefit from the screen. “They’re doing a 15-year follow, and I would expect to see a significant reduction in cancer mortality in the long term,” Dominitz said. “Time will tell.”

> Even if cancer therapy has progressed to the point where a 15-year follow-up fails to eke out a mortality reduction, UCSD’s Gupta pointed out that preventing cancer nonetheless can have a great benefit. The study still showed that colonoscopies reduced cancer incidence, which also means a reduction in surgeries, chemotherapies, immunotherapies, and other bad times. “The process of being treated is awful,” Gupta said. “If you ask patients if you’d rather be treated or prevented, a lot would say prevented.”

Does removing polyps count as “preventing” cancer? Or is it merely earlier treatment?