Inflation adjusted oil prices and their impact on GDP 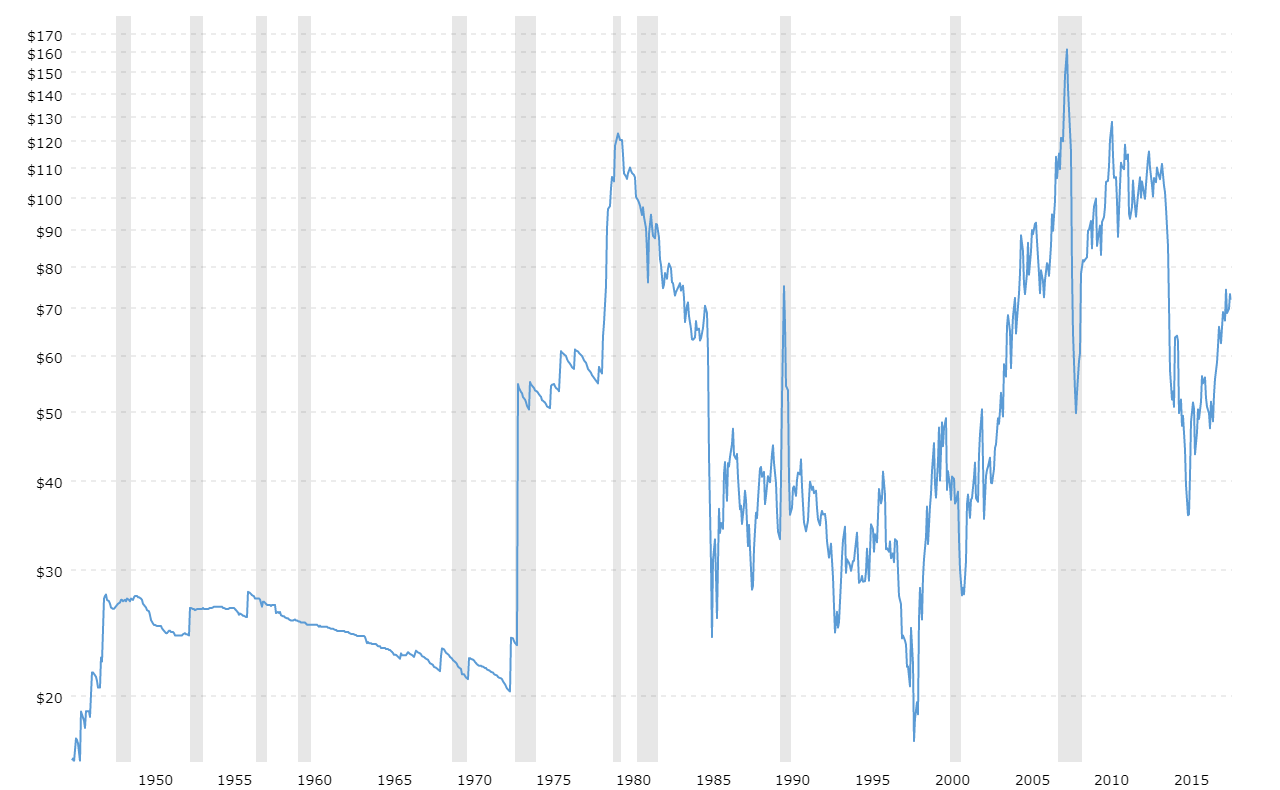 Interactive charts of West Texas Intermediate (WTI or NYMEX) crude oil prices per barrel back to 1946. The price of oil shown is adjusted for inflation using the headline CPI and is shown by default on a logarithmic scale. The current month is...

I saw a discussion here where someone said that they had never paid more for gasoline. I am assuming that was hyperbole, otherwise I would have to question the integrity of the person posting.

Another person pointed out that inflation adjusted the price of gasoline was not that high. He was kinda right and kinda wrong. It is complicated.

Looking at the inflation adjusted price chart we can see that oil prices are more than 2 times higher than they were in the 1950’s and 1960’s. This was a period when the USA was a net exporter of oil.

They are also higher than from the mid 1980’s to the turn of the century. So oil prices are higher than two of the prosperous times in modern history, and gas prices reflect this, they may not be having the impact that high prices had in the late 1990’s and the first few years of this century.

The other factor that changes the impact to the economy, is remote work. Remote work persist after the pandemic and will probably persist for ever. While this impact is random and some people will see no impact and others will be enriched by it, across the economy it requires less oil per unit of GDP.

Now, in defense of the poster that said he had never paid more for gasoline ever. Of he lives in California this is likely, and he may still be paying all time highs for gasoline. Most of this high cost is taxes and regulations imposed by California. Some might be (I have not researched the impact of fertilizer and weather on the Mid West corn crops yet.) due to costs of ethanol as well has problems in the crude oil refining industry.

My belief is that as long as the price of West Texas Intermediate Crude remains above 60 dollars a barrel, there will be a net drag on the economy. This will probably show up as inflation and slowing economic activity.

Natural gas and the energy cost adjustment in electric bill may take a lot longer to moderate.

I saw a discussion here where someone said that they had never paid more for gasoline. I am assuming that was hyperbole, otherwise I would have to question the integrity of the person posting.

That poster would be me.

Yes, I am in California. No, I did not exhaustively research historical gas prices. No, I did not adjust for inflation. While I don’t think it was hyperbole, it was somewhat ballparked to make my rhetorical point.

In nominal dollars, the price of gasoline in my area is indeed very close to, if not over, all time highs. Those highs were set not that long ago - earlier this year, if my memory is reliable. I’m pretty sure I’m close as that was about the time I was taking a road trip vacation and the price of gas was noticeable.

If you want full disclosure, I am personally not as affected by the price of gasoline as many others. I now work from home, so my driving has been reduced quite a bit. And my main car uses diesel, not gasoline. While the prices of the two fuels rhyme, they do not move in lock step. My “fun” car uses gas, but it gets less than 1000 miles a year of use. So I do buy gas. And the last time I bough gas for it (just a couple of weeks ago) I did pay one of, if not the, highest prices I’ve ever paid for gas. Well over $6 a gallon. I also take a moment or two to check local fuel prices online (both gas and diesel) and try to choose the lowest price within a convenient distance to my planned route for the errands I’m running. I’m sure I could have easily paid more had I not been in the habit of doing that.

Am I guilty of taking a bit of liberty with my comments? Yes. Are those comments way out of line? No, I don’t think so.

Another person pointed out that inflation adjusted the price of gasoline was not that high. He was kinda right and kinda wrong. It is complicated.

Inflation-adjusted numbers are for statistics. Nominal is what real people have to pay.

Yes, but nominal is based on what you are used to, depending on when and where you have been experiencing it. If I hadn’t bought gas since I first started driving, I would expect gas to be not much more than 25 cents a gallon. If I still lived in CA and had last bought gas this summer, I might have very different expectations.