Inflation and investing in Treasuries

Investors worldwide who want a safe investment which has never defaulted buy U.S. Treasuries. With the Federal Reserve raising the fed funds rate to combat inflation, Treasury yields have risen at all maturities.

Treasuries come in various maturities, which can be bought directly from the Treasury at auctions or on the secondary market. Some are plain and some are inflation-adjusted.

I-Bonds currently yield the rate of inflation which changes every 6 months (due to change on 11/1/2022). So many investors are scrambling to buy I Bonds, which pay a 9.62% interest rate if purchased by Oct. 28, that the Treasury Department said its overwhelmed site might not process all the orders in time. The maximum annual purchase of I-Bonds is $10,000 per Tax ID number but people can buy gifts for someone else and deliver it in 2023 or later while the bond continues to accrue interest. DH and I have bought gifts for each other which we will deliver in 2023. I-Bonds are assigned to an individual and cannot be traded on the secondary market. They always return full principal (if redeemed after 1 year and up to 30 years) regardless of what prevailing interest rates are doing. The I-Bond is the safest investment in the world, protected from default and loss of purchasing power from inflation. After a year, it’s like cash but better, totally liquid and always accruing interest.

TIPS yield a fixed coupon but the par value is adjusted for inflation. There is no maximum quantity for TIPS and they can be traded on the secondary market. TIPS will lose value if traded before maturity if prevailing interest rates rise, like any other bond.

TIPS yield more than the non-inflation adjusted Treasury IF inflation is higher than expected at the time of purchase.

The Treasury also issues Floating Rate Notes (FRNs) which have a maturity of 2 years but follow the interest rate of the 3 month Treasury plus a small increase which is set at auction. These are better than the equivalent plain 2 year Treasury if the 3 month T-Bill rises more than expected since the FRN yield will follow the 3-month up.

Obviously, the expected inflation rate is very important when deciding which of these Treasuries to buy. The CPI-U is the adjustment used for TIPS. The exact value of the CPI is built into the TIPS when issued and becomes the cost basis if bought on the secondary market.

All METARs (and consumers) are aware that inflation rose sharply in 2022. But although YOY inflation is still high, MOM inflation has slowed sharply in July, August and September. (I would post a table but I don’t know how in the new format.)

The Fed has been transparent about its intention to raise the fed funds rate 0.75% in November and probably 0.5% in December 2022. They are not as clear about what they intend for 2023. San Francisco Federal Reserve Bank President Mary Daly in September said she believes it will take raising interest rates to a 4.5% - 5% range and holding them there through the end of 2023 to get inflation under control, but said she could support doing more if inflation doesn’t fall as expected.

But Morningstar has a completely different take. Morningstar’s forecast would be music to the ears of traders who jump on any hint that the Fed may quickly pivot away from higher rates.

" 1. Interest-rate forecast. We project a year-end 2023 federal-funds rate of 3%, compared with 4% for consensus. Further out, our 2026 and long-run projection for the fed-funds rate and 10-year Treasury yield are 1.75% and 2.75%, respectively. We do, however, expect interest rates to dip below these levels in 2024 and 2025 as monetary policy leans accommodative.

If Morningstar is correct, an investor would do best to invest in 10 year Treasuries, not TIPS, in the first quarter of 2023. As interest rates and inflation falls, the plain vanilla 10YT will gain value. The TIPS principal would not gain much if inflation was low (would lose if deflation occurs) and the coupon would be lower than the Treasury.

The Fed has been working hard to convince investors that it will stay the course until inflation is reliably, durably back at its target of 2%.

I am dubious that inflation will be conquered in the short to medium term. That would force the Fed to maintain high yields and would favor TIPS. I bought some 5 year TIPS last week.

But I could be wrong. Inflation could moderate and stay down for several months, causing the Fed to cut rates by mid 2023.

What do you’all think? 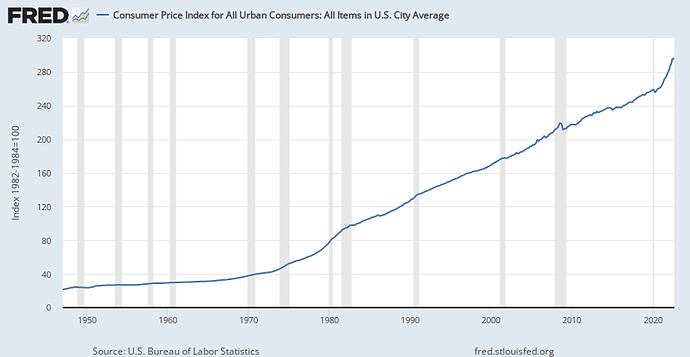 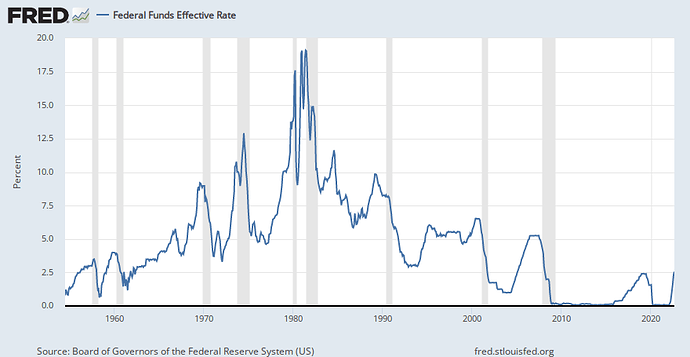 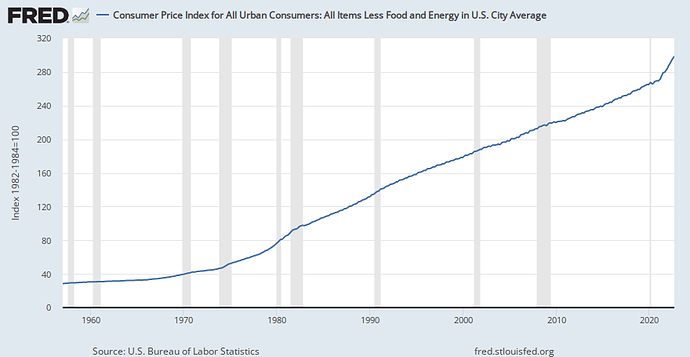 Consumer Price Index for All Urban Consumers: All Items Less Food and Energy... 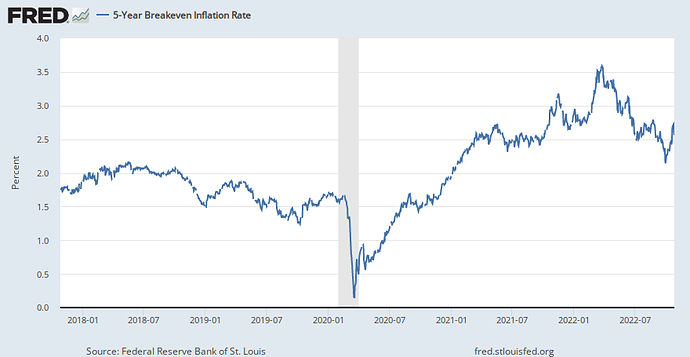 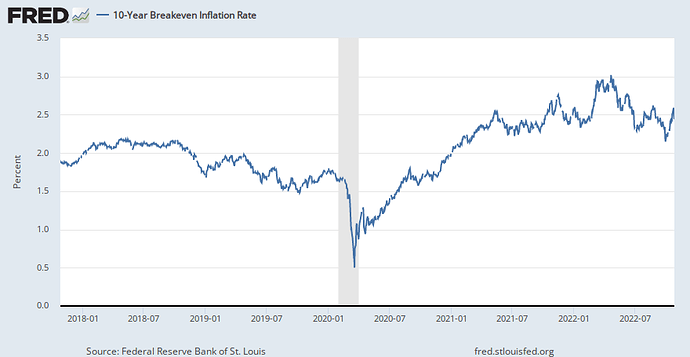 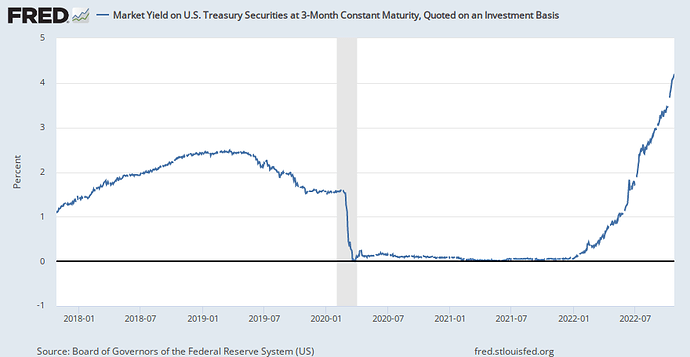 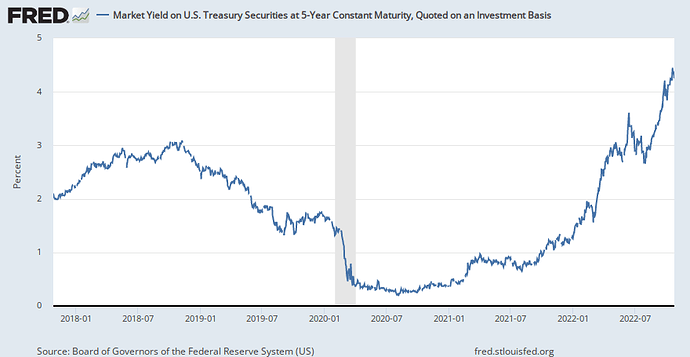 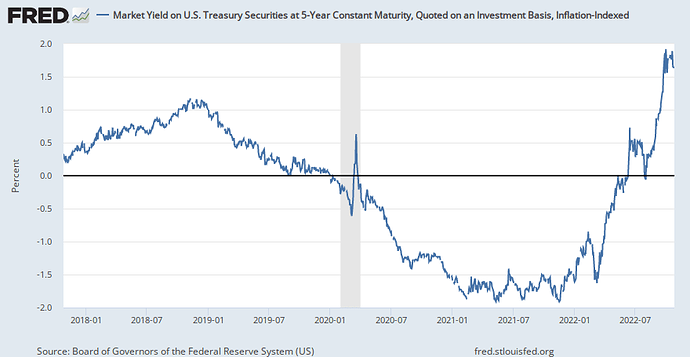 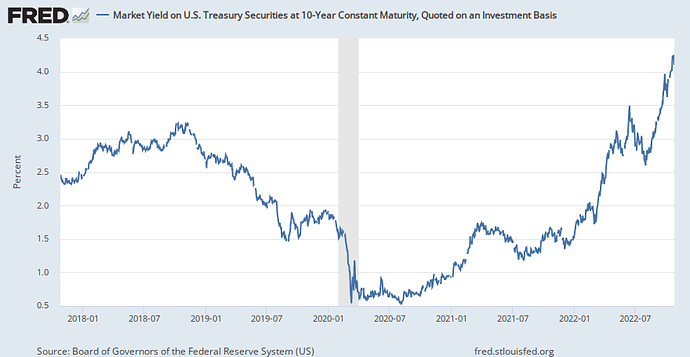 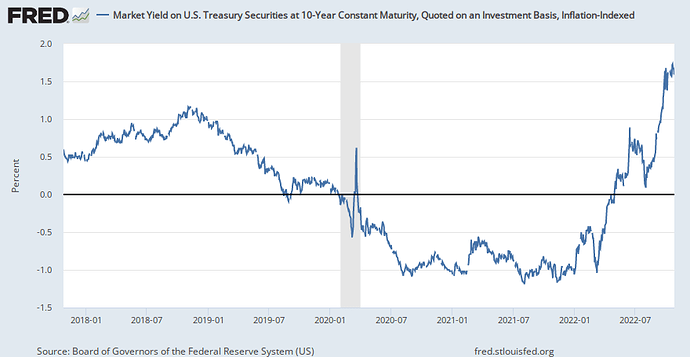 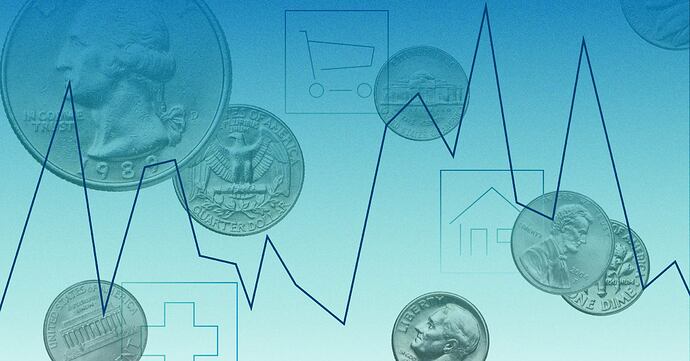 Why We Expect the Fed to Cut Interest Rates in 2023

When will interest rates go down? Here are four key takeaways from our updated forecast.

Why We Expect the Fed to Cut Interest Rates in 2023

When will interest rates go down? Here are four key takeaways from our updated forecast.

Just for fun, I’m going to mention a small number of potential geopolitical black swans which, while not individually likely, have high enough probability to affect the expected value of the outcome:

OK - got that off my chest, now let’s discuss bonds

Based on prior experience, a recession usually follows a rate inversion by about a year to a year and a half. That would schedule it at the end of 2023 or beginning of 2024. That said, we currently have nearly full employment and it is currently taken for granted that if someone wants to work, there is a job available for them (maybe not the job they want, but an empty slot all the same). Typically, that will change during a recession and while this is not the proper venue to discuss politics, the reality is that the timing is reality.

I don’t think that, with the current rate of supply disruption, increasing fuel prices (the US reserve is finite) and the ability of workers (at least in this neck of the woods) to command nearly $18 an hour for entry level jobs, inflation will not end in the next quarter or two. If the Fed keeps to their schedule of .75% followed by .5% this year, then the next click in 2023) will be the important one to watch.

Personally, I would give it a bit of time to see which way the wind is blowing rather than randomly rolling the dice. That said, I did the same gift thing with the iBonds as it seems like a chance to get a bit of a bump.

Another black swan to keep track of:

New York may be the canary in the coal mine for exactly the kind of winter health officials fear. As the New York Times reports, daily COVID-19 hospitalizations in New York City jumped to 1,100 people on Oct. 24, up from about 750 in mid-September. Health officials attribute the surge to the spread of multiple variants—especially BA.5, BQ.1, and BQ.1.1—as well as to the widespread lack of masking. City health officials are bracing for more hospitalizations not just from COVID-19, but also from the early arrival of flu and respiratory syncytial virus (RSV).

iirc, the Federal government has authority to order the workers back to work, for some limited “cooling off period”. Mr Market seems to think the government will bring the hammer.

Know what happens when you force people to work? They slow walk everything, like doing nothing until they make sure every tiny detail of every job is done precisely by the book. Remember when Union Pacific bought Southern Pacific, and UP’s system nearly ground to a halt? The previous owner of SP was more interested in selling right of way access to people looking for a place to run their fibre, rather than investing in SP, so SP’s equipment became dilapidated and staff had to invent workarounds. When UP came in, they decreed everything run by the book, ie the workarounds that had kept SP moving, were prohibited. 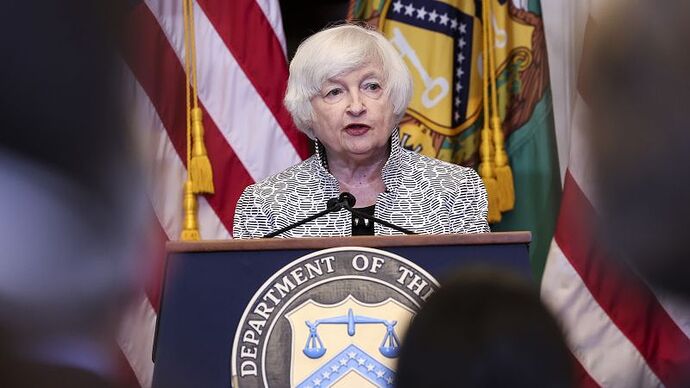 Treasury Secretary Janet Yellen said Thursday in an exclusive interview with CNN that she did not see signs of a recession in the near term as the US economy rebounded from six months of contraction.