IV estimate as of Sept 30

In the weighing machine method, price/share is plotted against BV/share (log-log), and the trendline is taken as the estimate of IV. The trendline depends on the starting date for the regression, but using price and BV data since Dec, 1981, the r^2 for the plot is 0.97, and the trendline as on Sept 30 is $454K/A-share.

In the repurchase price method IV is estimated to be about 5% above Buffett’s highest repurchase price. The average repurchase price in August was $444,401, which would place IV at about $468K/A-share. However the equity portfolio declined from August to the end of September by about 10% to 15% (rough estimate), reducing BV and IV by about 2.5% to an estimated $454K/A-share as of Sept 30.

In the multiple of BV method I used a ratio of IV/BV of 1.48, giving an IV of $469K/A-share. A ratio of about 1.5 fits with several valuation methods.

Fantastic - thanks for posting !

I like inferring IV from Buffett’s repurchase prices. The fact that he bought shares at $485K (1.40x BV) in March but paused repurchasing stock in April and May when the stock price was above that, and then repurchased shares again in June, makes me think that he estimates IV to be around 1.5x BV.

I thought this quote is meaningful in this discussion of IV. I personally think WEB and CTM consider IV higher than many would think- maybe 1.65 to 1.7 P/B? from listening closely and reading over the years. The difference in carrying value vs. IV is so especially dramatic in Insurance, BHE and Rails and growing larger each year. He has said they are not tempted to buy back unless there is a “very significant” discount to IV which to me seems more than 10%, maybe 20% but just my opinion. Here is WEB’s quote from 2014 Meeting taken from CNBC site:

JAY GELB: Warren, this question is on Berkshire’s intrinsic value.

In the annual letter, you appear to strongly signal that Berkshire’s shares are undervalued, especially relative to intrinsic value.

Aside from share buybacks, what actions can Berkshire take to narrow the discount between the current share price and intrinsic value? For example, would you ever consider an IPO of Berkshire’s individual operating units?

WARREN BUFFETT: The answer to the last part is no.

But the — I think we try to explain —my guess is I’ve never seen an annual report that uses the term, “intrinsic value,” or even talks about the intrinsic value of its units or business, as much as Berkshire does.

So, Charlie and I really devote considerable effort to explaining which of our businesses — where there’s really a significant discrepancy between what carrying value is, or book value — call it carrying value — and the true value, or the intrinsic value, of the business.

And I got very specific in the case of GEICO in the past year, for example.

So we’ve talked about it. We said we are willing to buy — not only willing, but eager to buy — stock at 120 percent of book value.

Well, with book value being close to 230 billion now, that obviously means we think that at $45 billion, roughly, over that figure, we are getting a bargain, in relation to intrinsic value.

And it’s — A, it changes from day to day. And — although not a lot day to day, but certainly changes, you know, over the quarters and over the years.

And the second reason is, if you ask Charlie and me to write down a figure as we sit here as to the intrinsic value of Berkshire, we’d probably be within 5 percent of each other.

But we might very — we probably would not be within 1 percent of each other.

And so we will continue to try to give shareholders information about the important units.

It isn’t — the small ones are not unimportant to us, but they are — they do not have a big impact on the overall intrinsic value.

We’ve got a few businesses. I mean, we have some businesses that may be carried at a few hundred million that might be worth a billion or maybe 2 billion, even.

But that isn’t where the big, undisclosed by the balance sheet, values are.

And we — they add up to some pretty big numbers. We try to tell you exactly the numbers and, really, and use the words that we use when we’re thinking about those businesses ourselves, in terms of estimating their value. But we don’t want to go further than that.

The 120 percent, obviously, is a loud shoutout as to a figure that we think is very significantly below intrinsic value, or we wouldn’t use it to repurchase shares.

We only believe in repurchasing shares when we can do so at a significant discount from intrinsic value.

Some companies talk about — Coca-Cola does — they talk about buying in shares to cover options. That actually isn’t the best reason to buy in shares.

I mean, the stock could be overpriced, and even though you issued on options, you shouldn’t be buying it in.

But that’s become sort of a mantra throughout corporate America, that if you buy shares to cover the option exercises that you’ve negated the dilution to shareholders.

But again, if you buy shares — if you buy a dollar bill for 90 cents, you’re doing your shareholders a favor. And if you buy it for $1.10, you are doing them no favor at all.

CHARLIE MUNGER: Well, I don’t believe we’ve ever wanted to get the stock way over intrinsic value so that we can issue it to other people and get an advantage for ourselves and a disadvantage for them.

And, I think the people that want the stock up very close to intrinsic value, or higher, really want egg in their beer. It’s okay if it’s a little below.

And we’re not in the game of ballooning our stock up as high as we can get it so we can issue it more at a profit to ourselves.

I think over the long term, our system will work pretty well. And I think the stock will eventually go above intrinsic value, whether we like it or not.

WARREN BUFFETT: Yeah. But we have — we really watched a lot over the years of certain managers attempting to get their stock to sell for way more than it was worth, so they could use it to trade for other companies. I mean, that was all the rage in the late ’60s.

One of the reasons that I wound up my partnership was that that activity was going on so much and it affected all other values.

And it was really a game. And it was a game that some people played sort of halfway honestly, and other people really cheated like crazy, because if you’re trying to get your stock to be overpriced, you’re very likely to cheat on your earnings and cheat on projections. Cheat on everything.

And it works, incidentally. It doesn’t work indefinitely, but it works.

Some companies, whose names you know, were, to some extent, built on that principle.

That’s a game that we not only don’t want to play, we really found it very distasteful, because we saw a lot of these people in action.

And it comes in waves. And we just — we don’t want to come close to playing it.

Unless I’m careful, Charlie will name names, so we’d better move on to shareholders. (Laughter)“

[WEB, 2014] The 120 percent, obviously, is a loud shoutout as to a figure that we think is very significantly below intrinsic value, or we wouldn’t use it to repurchase shares.

We only believe in repurchasing shares when we can do so at a significant discount from intrinsic value.

A table I threw together. Repurchase amounts, price to that quarters reported book, and year end cash level (be better to have quarter end cash level). Sorted by P/Fwd Book.

This is fabulous, thanks for sharing! What’s your definition of Fwd Book?

Below are your data shown graphically - I made it in case other folks are visual learners like me.

Look at that glide path. 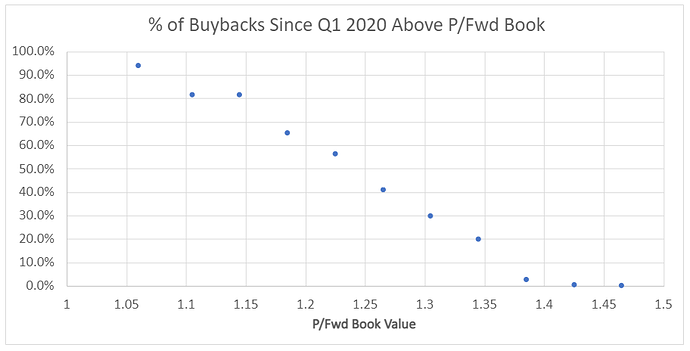 A table I threw together.

Nice table. Just a couple of comments that don’t really change the overall picture. (1) Why did you choose to begin in May, 2020 instead of October, 2018? Going back to May, 2018 would add another 15 lines to the table, with purchases between 1.25 x BV and 1.39x BV. (2) Regarding August 2020, the P/Ending Book was, as you note, 1.43. However BV was probably a few percent higher when Buffett bought in August than it was on Sept 30, as the equity portfolio dropped fairly steeply in September. Rough, I would guess that P/B at the time of the purchases was maybe 1.37-1.38. Like I say, these minor observations don’t change the table meaningfully. Thanks for sharing.

My own records for repurchases go back to Oct 2018, but Ravi Nagarajan shared this table going back to Sept 2011. 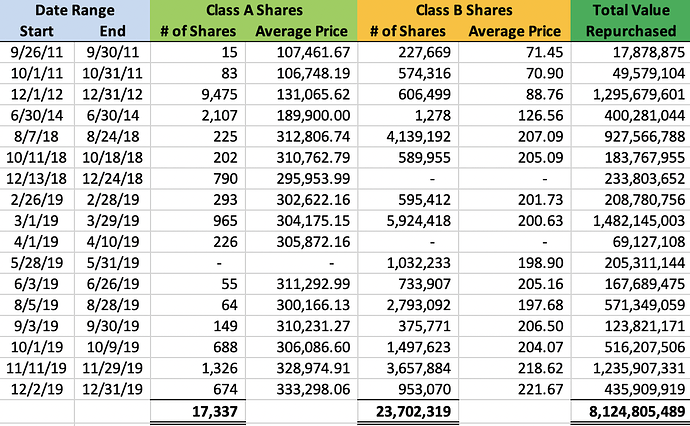 Berkshire Hathaway has released its 2019 annual report along with Warren Buffett’s annual letter to shareholders. In the letter, Mr. Buffett spends some time discussing the power of retained …

Ravi uses P/B as of the beginning of the quarter instead of the end of the quarter, so his P/B values are slightly different than AdrianC’s.

Here’s Ravi’s table with P/B at the beginning of the quarter included. 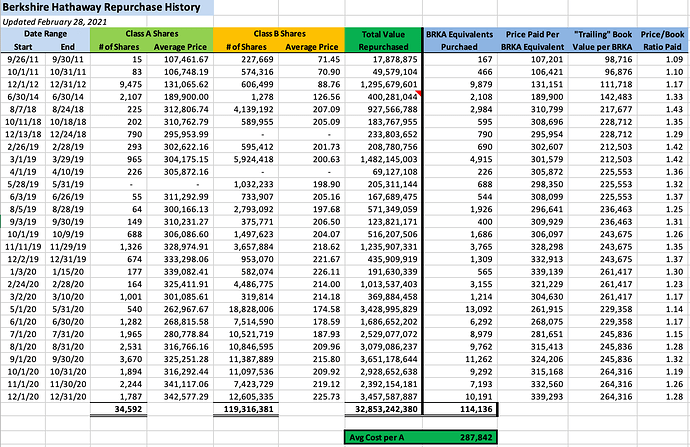 This is fabulous, thanks for sharing! What’s your definition of Fwd Book?

Below are your data shown graphically - I made it in case other folks are visual learners like me.

Look at that glide path.

The chart is a great idea!

The P/Fwd book is the average price paid that month divided by the book value per share at the end of that quarter.

I had a hunch that total cash level played a part in the repurchase decision. It didn’t seem to pan out. 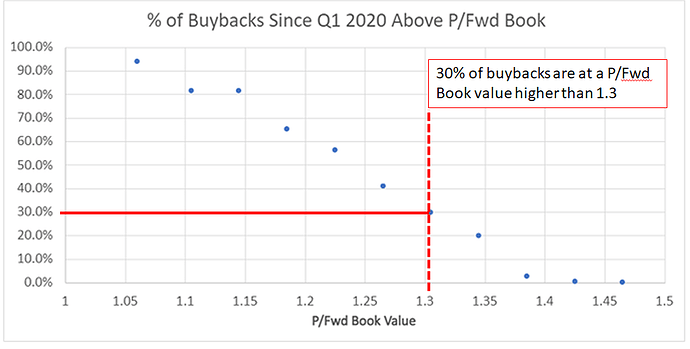 TYVM for the charts and data- very interesting!

“I start by taking cash and investments (valued at market), which were valued as follows as of the end of the third quarter: 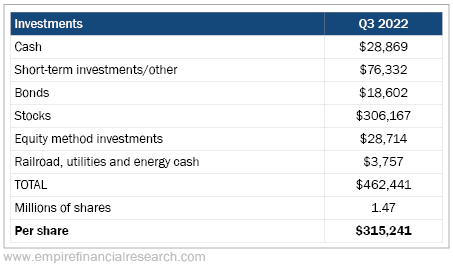 I then adjust this to reflect the current value of the stock portfolio by using CNBC’s Berkshire Hathaway Portfolio Tracker, which estimates that the company’s stocks, as of yesterday’s close, have risen in value to $332 billion. This $26 billion increase brings total cash and investments to $333,000 per A-share.

Then I value the wholly owned businesses, starting with their pre-tax earnings, which I calculate as follows:

Note that I subtract all of the underwriting and investment profits from Berkshire’s massive insurance operations but add back a rough estimate of the average insurance underwriting profits over the past decade ($1.4 billion annually).

This results in $19,408 in adjusted pre-tax earnings per share over the past 12 months, to which I apply a multiple of 11 times to arrive at a value for the operating businesses of $213,000 per A-share.

With the A-shares closing yesterday at $442,100, that means the stock is trading 19% below my estimate of its intrinsic value.”

Isn’t Tilson double counting value of OXY and Kraft Heinz by including them in both equity method investments and portfolio value?

Yeah there are quite a few problems with the method described above that uses “CNBC’s portfolio tracker.” First of all, CNBC’s portfolio tracker is not accurate - share counts are wrong for Berkshire Holdings, holdings like DaVita are owned by the pension funds and not owned by Berkshire or held on Berkshire’s books, etc… I don’t know if he is double counting OXY and KHC because he doesn’t give enough detail. I also didn’t hear anything about the taxes due on those investments. Why not just use Berkshire’s own financials. They are correct. It is a good set of books. Don’t replace it with CNBC data.

Isn’t Tilson double counting value of OXY and Kraft Heinz by including them in both equity method investments and portfolio value?

I think he is. The CNBC tracker gives total value of $322bn including OXY & KHC.
Take $25bn off that.

He also doesn’t knock off the 30bn in cash that will always be held. IMO it should not be counted when valuing as a going concern.