Libertarian Eugenics: Billionaires like Elon Musk want to save civilization by having tons of genetically superior kids. Inside the movement to take 'control of human evolution.'

This week we learned there are now 8 Billion humans stressing this planet. And then we learn a new term “pro-natalist” which is a new movement in high wealth circles to fill the Earth with their progeny.

Best laugh here: there is a superior being you are about to meet who named his baby girl, Titan Invictis (after having named his older son, Octavian.) What’s next? Howard Roark? Dagny Taggart? 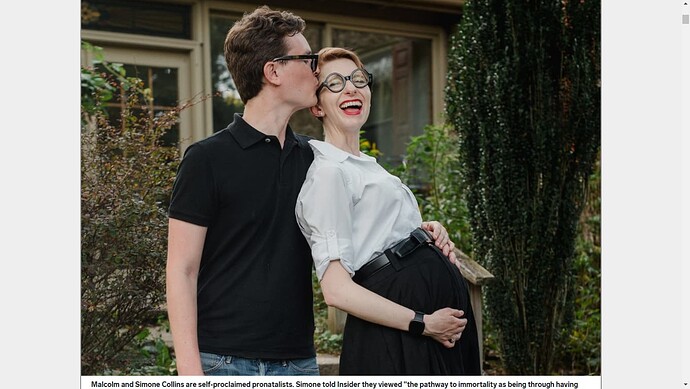 Malcolm, 36, and his wife, Simone, 35, are “pronatalists,” part of a quiet but growing movement taking hold in wealthy tech and venture-capitalist circles. People like the Collinses fear that falling birth rates in certain developed countries like the United States and most of Europe will lead to the extinction of cultures, the breakdown of economies, and, ultimately, the collapse of civilization. It’s a theory that Elon Musk has championed on his Twitter feed, that Ross Douthat has defended in The New York Times’ opinion pages, and that Joe Rogan and the billionaire venture capitalist Marc Andreessen bantered about on “The Joe Rogan Experience.” It’s also, alarmingly, been used by some to justify white supremacy around the world, from the tiki-torch-carrying marchers in Charlottesville, Virginia, chanting “You will not replace us” to the mosque shooter in Christchurch, New Zealand, who opened his 2019 manifesto: “It’s the birthrates. It’s the birthrates. It’s the birthrates.”

Google searches for “population collapse” spiked this summer, after Musk continued to raise the issue in response to Insider’s report that he’d fathered twins with one of his employees. According to the United Nations, more than a quarter of the world’s countries now have pronatalist policies, including infertility-treatment benefits and “baby bonus” cash incentives. Meanwhile, a spate of new assisted reproductive technology startups are attracting big-name investors such as Peter Thiel and Steve Jurvetson, fueling a global fertility-services market that Research and Markets projects will reach $78.2 billion by 2025.

p.s. As this article points up, Jeffrey Epstein was a “pro-natalist.”

Malcolm, 36, and his wife, Simone, 35, are “pronatalists,” part of a quiet but growing movement taking hold in wealthy tech and venture-capitalist circles

In the 1920’s it was “eugenics”. Looking for traits of superior humans and encouraging better specimens to breed more often. It was a world-wide phenomenon.

I sometimes refer to people like this as “morons”.

And then we learn a new term “pro-natalist” which is a new movement in high wealth circles to fill the Earth with their progeny.

Have these folks ever thought about what the world would look like if they were successful at this task - if the earth were completely filled by their offspring?

In 150 years, their great-great-grandchildren will be the only ones left to wipe the drool off the chin - and clean the poo poo off the buttocks - of their aged and senile grandchildren. In short, all menial tasks will be done by their “genetically superior” progeny.

So their genetic superiority will be worth nothing.

I don’t play well with rude Superior Beings who think that the homeless, and the pysically and mentally handicapped, are lazy.

It costs me nothing more than a bit of time well-spent to exchange a pleasantry and maybe some pocket change with some poor soul living on the street and the nightime shelters and who really need to be in a hospital.

At this moment there are derelict vessels washed up on most every Keys beach. Most of these vessels were liveaboards, and now these people are homeless and don’t have the money to tow their boats back into the water. At one boat ramp near me, ther’s this young couple living in their car, counting on one of them being able to argue with the state should someone come to tow their boat (their home.)

Sometime next month, if you can’t pay to have your boat tugged back out to a mooring field, your boat will be picked up by the State and disposed of.

At this moment, the Homeless Shelter in Key West is overun at night with not enough beds. So, we have people living under bridges, in the mangroves, in the entrances of closed stores on side streets.