Earlier today, my BIL called, wondering if I was watching the playoff football games in 4K. We both have Xfinity, new LG OLED C1 TVs, and I hadn’t considered it. He saw a 4K button when he tuned in, I looked, never saw it. Looking onto the Video settings on the LG TV the best offered was HD… Not 4K…

As I looked, Googled, dug some more, it came down to my having a PX022AN box, where his was an AX014AN box… I had recently replaced my DVR box, but never thought to ask about 4K… Tomorrow, as the local Store is open, I’ll go talk to them…

I do see 4K TV using the YouTube App on the LG, but that is using the ethernet connection, not the DVR box… There is a difference!

So I also stirred my SIL, his Dad, maybe they can catch up as well…

It could be cables or internal on the DVR box. Our Apple TVs run some kind of test that will tell us if the connection between the ATV and our Sony is up to snuff. I poo pooed and eventually changed to cable made a difference. No question the Dish and DirecTV people send a lot of stuff available in 4K by a lower standard. I am pretty sure that is a band width issue. The birds have a capacity and the folks owning the birds would be stupid not to charge more for more data.

I get my cables from MonoPrice.com – about half the price of Amazon. Recently discovered my 10 year old Cat 5 cables were limiting capacity between my GateWay and Router to about 100Mbps – that appeared to cause issues with multiple simultaneous demands.

My local cable companies have hard capacity limits with their wires. They have no motivation to upgrade older lower capacity cables. When people drop cable, they generally have only the choice of birds.

I have found a way to get good video, but unfortunately it is a bit more expensive. We have AT&T fiber which for current practical purposes has infinite capacity. We have the cheapest option – 350Mbps at $45 per month. The current max is over 2,000Mbps for us. I understand 5,000 will be available this year. Have a mesh system that feeds DirecTV Stream via WiFi6. The video boxes have no memory/Spinner – everything even our “Recordings” of network programs comes down the pipe as we view it.

The added costs is not the wire, but being forced to choose DirecTV by the fiber owner – AT&T.

The only glitch I have managed to make is when I hit the 30 second jump button too fast. I can exceed the capacity of the RAM buffer in the box. At that point I have to backup to resume. If I choose the Fast Forward system I can move at something over 10X. The 4K image is frozen, but I have a Picture in the Picture so I am able to if/when say Half Time is over.

Tomorrow, as the local Store is open, I’ll go talk to them…

Be careful. The last time we went to the Xfinity store they gave us the wrong box. It led to all sorts of issues. You would think they would train their staff a little better.

Local Store folks have been great here, helpful, easy to work with, it just never occurred to me to ask about 4K as this LG 65" C1 TV has been such an improvement over the older flat screen… I tried for a 77" set, but DW nixed it because it was a tad wider than the base… SIL went for the 77L, bigger cabinet, room, BIL has this same 65" set… But somehow he got the newer DVR box…

Once the store is Open, I’ll go check, else it can be done online… I just like to see the Store folks… And there may be even newer UHD 4K DVR boxes…

It could be cables or internal on the DVR box.

Definitely the Xfinity DVR box is outdated, at least as far as 4K video… They’ll swap it if they have the new one, else will order it… BIL & I compared our About screens, his was the later unit… The unit comes with a new HDMI cable, but I swapped all mine out when I swapped the TV…

Another problem, one of these days I need to clean out all the old cables, all sorts, I did dump old SCSI cables, but now, there are bins of tele, USB, Ethernet, HDMI eating space… Maybe just donate to the local GoodWill or similar…

eWaste events usually take cables. Can’t speak for others, but out local one sends cables to a recycler who goes for the metal.

I would not assume the HDMI cable you get with a TV/etc is compatible with 2.1 and that is the spec you want. They just want include a cable so you have one. Good cables meeting specs are reasonably priced at MonoPrice.com

Update: Store was open, helpful, but sadly for today, none of the 4K boxes on hand, so it’s Ordered, be here in a few days… Confirmation email was in my Inbox before I came home. And it shipped later in the day… No Arrival time yet,

I’ve used Monoprice, but nor for a long time, the setup has been stable for so long, I’d have to dig around to make changes, I do have a sketch, as well as memories of the hassle it was to get ethernet runs tot he various needs, I’ve still got a roll of CAT5e and connectors, crimpers, testers, same for coax, but I’ve whacked off a lot of the old coax, no longer needed as the Gas outguess TV and moved on to web access… But now, they’re grown, married, etc… Time marches on…

Well, the 4K DVR unit has shipped, UPS from Portland, but I’m not seeing the detailed tracking, I did log into My UPS, but o more info there than without logging in.

So it’s only 630 miles from Portland to here… We just went through Portland a couple weeks ago!

OK now I found it will be here Wednesday… UPS emailed, texted, arrived…

Model XG1v4-A - Simpler than I expected, maybe the same power brick, so even simpler! One video I’d watched was another model, with no coax connection, just Ethernet or WiFi, so I was concerned it would overload the little Airport Express, the closest WiFi jobber… No problem… But too late this evening, tomorrow’s project…

Next question, is after I bring it up, I see it has the Dolby Audio symbol, but is it Dolby Atmos, as the LG TV & Soundbar support… Might be in Settings…

Quick n easy, added the ethernet link just because I could, easily… Looks great, seems to have improved even the normal shows, per the forums, it does some magic, upscaling as needed…

Turned in the old dvr box… All set for the Game(s). Go NINERS!! 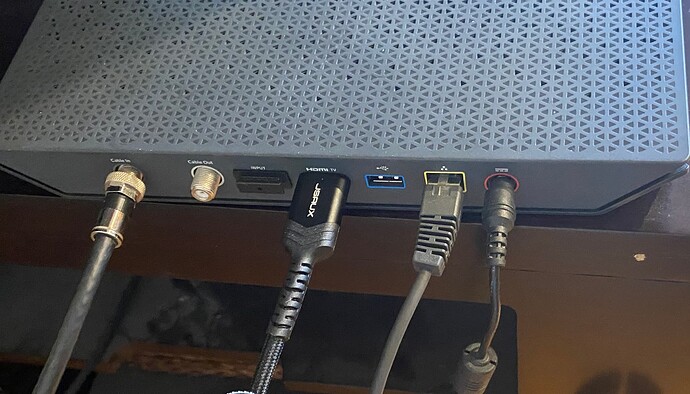 Staples takes all of that stuff. Cables, electronics, phones, devices… just not “appliances”. They even give you a couple of coupons if you bring them enough in one box, one for in-store that day and one for within a month. They even took my @2008 Wii Fit board. Check out their recycling link.

Local Staples used to take empty ink carts, give credits toward replacements, not sure they still do… I have a few toner carts I’d drop off, will check…

At Staples, it's recycling day everyday. Recycle a wide range of electronics, ink cartridges, batteries, paper, and more for free in every Staples store.

What can be recycled in store.