Mungofitch has left the building, but his bottom detector fired off

At the very least close all short positions. This detector can signal multiple times before a solid rally begins.

Saul has noted that the Saul stocks are up off their lows significantly.

Having seen this game before, I would recommend a lot of time be spent getting a watch list together.

I would recommend a lot of time be spent getting a watch list together.

Been working on it!

I know I am staying on the sidelines in cash.

These calls are fascinating. They leave the longs and shorts at odd decision making points. Odd or difficult. Almost over informed.

The bottom detector is not quite the same as the buy detector in his indicator, correct? Excuse me while I start thinking about things to eventually buy…

That is another problem when to buy. Yep I think it is 99 days? Sounds late to me. Just safer.

But if we scrape a bottom all through 2023 it is not late.

I am absolutely no expert on this, not least because I don’t know the formal description for his current MI approach to identifying major bottoms (only the post from … 2011?).

My understanding is that the major bottom detector can keep triggering again and again and again and when it stops triggering, and turns positive, then in the short term it may be a good idea to buy. MAYBE. Because in a ‘deep and tricky part’ of the crash, you may get a couple of false positives before the true bottom.

If I had to guess, from the contagion-like behaviour and extreme moves in the UK government bond and currency markets last Tuesday, and the very high overnight repo rate, we may be in a ‘deep part’ of the crash.

I’m just making this up here, but on the occasions when it works well, the pattern goes something like this:

It depends whether you want to trade the bear market, or if you want to buy at a particular price point. For example it’s possible to absolute nail several local bottoms with a successful ‘bottom detector’ but then find yourself having lost money when subsequent market bottoms are visited.

From Jim’s new site:
“The other model is a “major bottom” detector. It’s signals are quite rare, but often quite useful. Occasionally it is too early, giving buy signals several times on the way down during a really bad market tumble. This was really only a problem in 1974 and 2008. But other than those stretches, usually the signals are pretty good.”

The general public, we, never got any accounting from the powers that be of what happened in 08 to the interest rate swap market. In a sense it was written out of the history in terms of buying bonds by the central bankers.

The other catch is that it often signals several days in a row, so the safest interpretation is to wait for the first market day that it does NOT signal. This signal triggered on Sept 29, but not Sept 30, so (to the extent that it has any value) the US market is a buy now. The market might tumble some more, but it’s usually quite a bit higher a year after such a signal. If you were to buy after the first “no signal” day after a signal day, on average the S&P 500 is 12% higher 6 months later, 21% higher a year later, and 36% higher two years later. Not adjusted for dividends or inflation.

It’s far from perfect, but if I had some short term short market positions, I’d close them

So it is a buy within the limitations of the method. Note: It has detected false bottoms two times in the past, in 1974 and 2008.

Can you (syke6, I mean, not Jim) share any thoughts with us about why you think those dates had unexpected results?

From a Mungo post within the thread, he provides an older graph showing when his minor and major bottom indicators fired:

Question: any prediction as to how many times the bottom might be tested after the major bottom signal has been triggered?

Pretty good chance, if this ends up being a great big bad bear.

It’s hard to categorize the signal’s behaviour for that, but you can look at this graph.
http://stonewellfunds.com/CapitulationBottoms_2018-12.png
The vertical lines are the major bottom detector signal dates.
The longer lines mean dates of stronger signals.
You can see lots of “too early” signals in late 2008, but it’s mostly not bad.
The market often drops more, but the one year forward returns are pretty reliably good.

Interesting to read through that thread. Everyone, including Mungo, was somewhat skeptical about the bottom detector being reliable at that time, thinking there might be another leg down. Some people were totally disbelieving. I guess it’s pretty good at identifying times of high pessimism.

Not sure. Jim’s never really said how it works, so I’d just be speculating.

It also would have seen a false bottom in the 1947 downturn in all likelihood.

All of what I write below is purely my personal opinion, and is not presented as factual! If anyone sees something which is clearly unfair or untrue, I would be grateful if you could highlight it.

I think Google clearly have internet advertising captured. The problem is, revenue growth is going to suck, because they’re the 99.6% gorilla. Hence ‘2 ads before each video’ etc on Youtube. Hence people being annoyed their web and mobile ads are getting shown randomly to totally unrelated audiences they didn’t want to pay for, to drive up ad impression payments.

Frankly, I feel Google are just not good at many things except ads - when it comes to making money from them.

(I say that as someone who occasionally gets recruitment attempts from G. I always say no.)

For me it’s very hard to justify buying Google when I can just buy more Berkshire.

Android phones aren’t as popular as iPhone despite being 1/10 the price and largely similar features.

While I appreciate the sentiment of the overall post this piece of it is beyond ‘just’ wrong - it’s incorrect on a number of levels including:

You’d really struggle in the West to find a model for sale at 1/10 the price of the iPhone SE.

I do agree that Android is not necessarily cheaper – you can certainly pay as much or more for one – but I do think part of Android’s popularity for the masses (in spite of seeing several sites that claim that IOS has overtaken/passed Android in the US ) is the availability of very cheap phones.

That is about what I was wondering. Would such a mechanical device signal “a” bottom, or “the” bottom? I keep thinking of the nonsense I see passed off as “news”, with shrieking headlines like “Motley Fool issues rare all in buy alert”.

How can a mechanical rule measure the myriad things that panic the market one way, then the other? We don’t often have a full on European war, with one party threatening to go nuclear, so how can it be factored in to a mechanical rule?

The mob can always find something else to panic about, even if the “crisis” is entirely fabricated.

Android is the largest OS in the world period

Apologies, you are quite correct. The fault is mine, I should have explained what I mean by the word ‘popular’. I mean ‘fashionable, desirable’, not ‘purchased’. One might argue that fashionable desirable things are ‘whatever actually gets purchased’. But that leads us to the conclusion that bread and milk are profoundly fashionable. I suppose that also means I’m talking about the developed world (where profit lies) and not those countries where people are paying $80 for a phone. 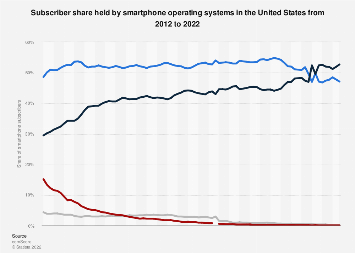 Apple iOS continues to hold down the largest share of the smartphone operating systems’ market in the United States, claiming more than half of the market as of June 2022.

I wonder what it would be if the price of iphones didn’t have such large profit margins embedded. But that is not the case.

Anyway I’ll happily concede you are correct that android is more ‘popular’ than iphone in the sense more people choose to use them.

You’d really struggle in the West to find a model for sale at 1/10 the price of the iPhone SE. 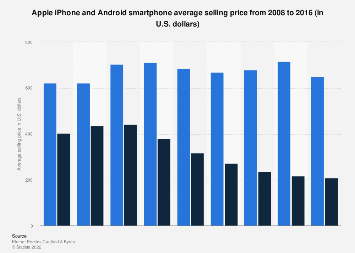 This graph shows the average selling price of Apple's iPhone (iOS) and Android smartphones from 2008 to 2016.

There’s also the question of whether ‘what you pay’ is merely the up-front cost of a phone or the total by the time you resell it and upgrade.

That is significantly different between android and iphone. If this point seems unreasonable, consider, would it be unreasonable when comparing cars? 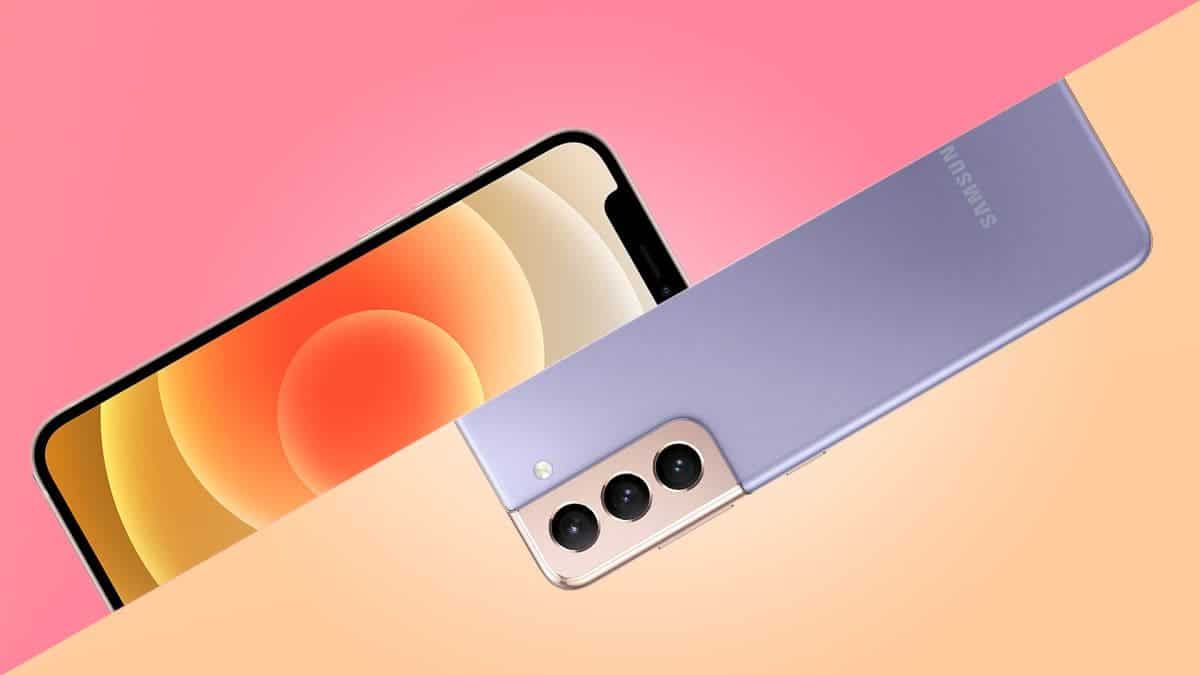 Android smartphones drop in price after purchase twice as fast as iPhone. In 12 month, Android phones lose 33.62% versus 16.70% for iPhone.

Question to the crowd: Can anyone name any large company in history with more of a track record of buying & building ‘toys’ that are not monetisable, or not monetised, ultra-low margin, or simply straight out abandoned, than google.

Can anyone name any large company in history with more of a track record of buying & building ‘toys’ that are not monetisable, or not monetised, ultra-low margin, or simply straight out abandoned, than google.

I’m not qualified to answer that direct question, as I don’t have any facts about abandoned projects across large companies.

However, I think I can add a little fuel to the fire wrt google and abandoned projects. I worked for a global electric / gas utility from 2008 - 2010 in their IT function as a Director of Data Architecture. This role put me in an area of responsibility to be deeply involved with many of the initiatives throughout the organization. One of those initiatives was “smart metering”.

Smart metering was the term used to measure and manage distributed energy production in the home as well as managing power hungry devices / appliances within the home.

We were contacted by google to “partner” with them to use their resources (data storage, analytics, AI and research people) so that they could use the information in a way that could be useful to them. Obviously we all know that the more google (and other FAANG) companies know about you and your lifestyle, the better they can target ads and other offers to you.

Google spent a lot of time with us trying to sell us the idea of a partnership that offered us these “free” services in return for access to the data, but no way would the execs in the corner office allow that to happen.

I attended a national utility conference a year or so after we terminated our relationship with google and learned that they had abandoned that idea. However, they then bought out Nest in 2014, which got them another step closer to energy monitoring (as well as other home management services).

So, while they may have abandoned the “we’ll offer free services to utilities in exchange for their data” initiative may not have taken off, it may have lead to them considering an alternative strategy of just flat out buying a company that was on the ground floor of the energy management service.