The study found that a wide array of industries are well above the national average of 37 percent - already an astoundingly high number when compared to other months over the past two-and-a-half years.

Leading the pack were businesses in the education sector, up 13 percent from last month to an astronomical 57 percent - the highest ever seen in that subsect of businesses.

Not far behind were two more types of businesses that also saw record delinquency in the month of October - the automotive sector and restaurants.

@DrBob2 , please post a link when citing data. I would like to read the whole article. How does this failure to pay rent impact the Macro economy? Does this mostly hurt small landlords or will banks have rising defaults that could destabilize them? 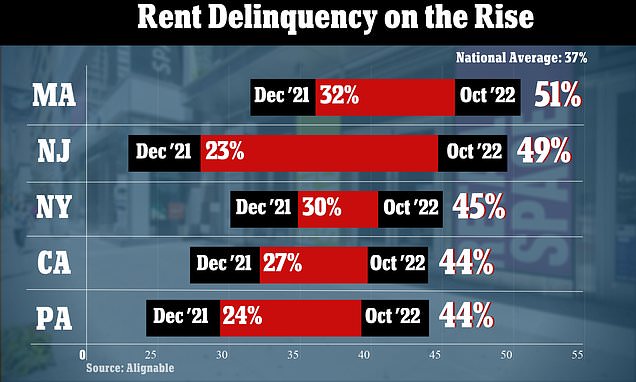 The findings, published Tuesday by Boston-based business tracker Alignable, are raising more than a eyebrows, as they illustrate the stark effect inflation is having on everyday Americans.

I"m surprised how high delinquencies were in December 2021 frankly. What is the average normally?

I don’t know about delinquencies, but high rents caused me to move my tax practice from an office back to my home at the beginning of this year.

Anecdotally, the building I was in was sold about 3 years ago. The previous owners held it for about 20 years or so. At the time of sale, I’d estimate the building to be at 95% occupied. The major tenants were stable, and the largest kept adding space. (I actually worried that they’d want to take over my space, as they had grown during my occupancy and were now next door to me.)

By the time I left, occupancy was down to less than 50% and no tenants had moved in under the new ownership. But the rent they wanted at the time of my lease renewal was double the old rent and they weren’t budging.

I fully expect that building to be sold again soon or to end up in foreclosure. The only other sensible option is that the building is nothing more than a money laundry for some illegal business.

In accounting how does the write off of a vacant office space work for the landlord?

Was the purchase some sort of look through maneuver? Having a capital gains somewhere else and needing to reinvest in order to avoid capital gains taxes. Is that a possibility if poorly worded for why the new landlord bought the building?