I’m approaching 63 and have a lot of friends in the 62-70 age group. Most are affluent and plan to delay taking SS until age 70 to provide longevity insurance for them and/or the surviving spouse. Lately the discussion has turned to “should we take whatever we can get NOW, as it’s looking more and more likely that a SS specific fix, and/or a general budget fix, will include some sort of means testing and/or additional taxes on SS income".

I not yet sure what I think on this.

EDIT NOTE: I tried to post this in the “Personal Finance” category but while it let me write the post, when I attempted to actually post it, it said I was not permitted to see whatever and whatever. Yet it let me post this here, which, I think, is a close second place for where this belongs. HUH? This new format is MADDENING.

There would be riots if Congress tried to change SS eligibility rules for people at or nearing retirement age.

If you are under 50, it is something to think about for sure.

It could very well be a back-door “eligibility” thing. With some sort of “tax cliff” where SS effectively gets taxed back for “wealthy taxpayers” (many writing tax law define the group I’m talking about as “wealthy”. But, trust me, they aren’t Elon Musk or Jeff Bezos. Honest people would define them as “upper middle class”.)

I’m still certain no politician would ever dare lower benefits for people at or nearing retirement. That populations would never standfor it, and they (which is pretty much “we” at this point) vote. Much easier to raise taxes on younger people.

Think back to when Ronald Reagan came into office in 1981. He was then briefed that Social Security would NOT be able to pay full benefits the NEXT YEAR…not in 12 years. Reagan saw the political lethality of making this a partisan issue so he did exactly the right thing…he put the HHS Secretary in a room with both Republican and Democrat leaders and told them to come up with a bipartisan solution…which they did.

This new format is MADDENING.

Who else remembers what Dan Rostenkowski learned? I could not easily find a picture to link.

Daryll, I think that you and your friends 62-70 will be largely untouched by any changes.

I just started taking SS at FRA (66y, 4 mos.) but only because I don’t need it and can use it to average into crashing stocks in a down market.

So far it has been a losing proposition because I have just added the first two checks to savings earnings one percent.

You can easily find ultra-short term CDs paying 3.5 or more, or slightly longer treasuries paying 4%. Since rates seem likely to continue going up, run them short and roll them over as long as you don’t need the money now.

Yep. The only thing stopping me is laziness. My SS goes directly into savings which will then go into my etfs on a monthly basis on the theory that I can grow my equities and spend the growing dividends along the way. With a minimum of effort.

Who else remembers what Dan Rostenkowski learned? I could not easily find a picture to link.

Daryll, I think that you and your friends 62-70 will be largely untouched by any changes.

Here’s a link to the 1989 video from CBS News – timeless.
https://www.youtube.com/watch?v=qre7DzEtxyc

that was an interesting video, found myself chuckling a little at how well behaved the protestors were.

Anybody that depends on SS and Medicare ( and that is probably 90% of all Americans 65+ ) had better wake up and start seriously thinking about who they are voting for, and what these potential candidates really and truly want to do.

I liked the part where the senior citizens brought Rosty’s car to a stop, then started beating on the hood with their little protest signs.

The thing that Dan Rostenkowski should have learned is that using congressional franking privilege (free postage) for campaign mail can get you in jail.

Also, not a fan of this awkward and clumsy format. Going this way was a bad decision in an era of many other alternatives to “learning, entertainment” and whatever the other thing TMF was supposed to be for 20+ years ago.

Also, not a fan of this awkward and clumsy format.

Guess what? You are not the only one that feels this way. Welcome to the club.

One of our candidates for senator wants to “cut the knot” (i.e. eliminate) SS. He has also made some statements about “privatizing”. I’m sure that if they ever dared touch it, they would have a phase-in period. People 60 and over probably have nothing to worry about. People under 40 might not get much. Assuming they changed anything at all, which I suspect they won’t.

RR also signed into law the 1983 bill that taxed SS benefits for the first time, which helped claw back a portion of the $ into the federal coffers.

That number seems quite high. But also it depends on what one means by depends (no pun intended) 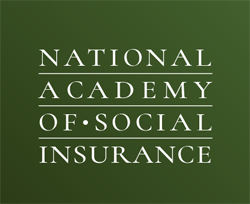 The Role of Benefits in Income and Poverty - National Academy of Social...

Social Security is the major source of income for older Americans. Over 8 in 10 Americans aged 65 and older receive Social Security. For over three out of five (61 percent) of those beneficiaries, Social Security is more than half their total income, and for one in three (33 percent), it is all or nearly all of their income. Social Security is a large share of income because many Americans age 65 and older lack significant income from other sources. Pensions (from private or government employment) were received by about half of married couples (from either the husband’s or the wife’s career). Among the unmarried, 41 percent of men and 38 percent of women had pensions.

Social Security is the sole source of income for about one in five (20 percent) people aged 65 and older.

And you might suspect that those who qualify for the minimum benefit probably do very well financially. Collecting much more than they put in.

What does it take to qualify? 10 quarters I think. Minimum wage people probably do quite well. And of course disability coverage can come soon.

What does it take to qualify?

To be eligible for SS retirement benefits, one must either be ‘Fully Insured’ or married to someone for at least a year who is Fully Insured, or if divorced, has not remarried and was married for at least 10 years. Fully Insured means one has made the minimum quarterly income subject to SS tax for a minimum of 40 quarters (10 years). The current quarterly minimum is $1,510 for 2022.