“A renewable energy plant in Oregon that combines solar power, wind power and massive batteries to store the energy generated there officially opened Wednesday as the first utility-scale plant of its kind in North America.”

PORTLAND, Ore. (AP) — A renewable energy plant in Oregon that combines solar power, wind power and massive batteries to store the energy generated there officially opened Wednesday as the first utility-scale plant of its kind in North America.

At the Oregon plant, massive lithium batteries store up to 120 megawatt-hours of power generated by the 300-megawatt wind farms and 50-megawatt solar farm so it can be released to the electric grid on demand. At maximum output, the facility can produce more than half of the power that was generated by Oregon’s last coal plant, which was demolished earlier this month.

Remember the word “massive” in the above paragraph.

The coal plant they are referring to is the Boardman plant.

The Boardman plant had a capacity of 550 MW. Therefore, this new renewables and battery combination can produce at least 275 MW (half of the Boardman capacity).

0.44 hours is about 26 minutes. So, the batteries can run for 26 minutes at 275 MW, then will be depleted and will need recharging. A coal-fired power plant, such as the now demolished Boardman plant, could run for 24 hours a day, 7 days a week, at 550 MW. So, we need to wonder if this new solar/wind/batteries facility is truly an adequate replacement for the coal plant? Most likely, the utility in Oregon will just burn more natural gas, or possibly import more fossil-fueled power from outside. Natural gas is cleaner than coal, no doubt. But 350 MW of wind and solar, plus 120 MW-hr of batteries, is not a total solution.

Below is an article with somewhat different numbers. 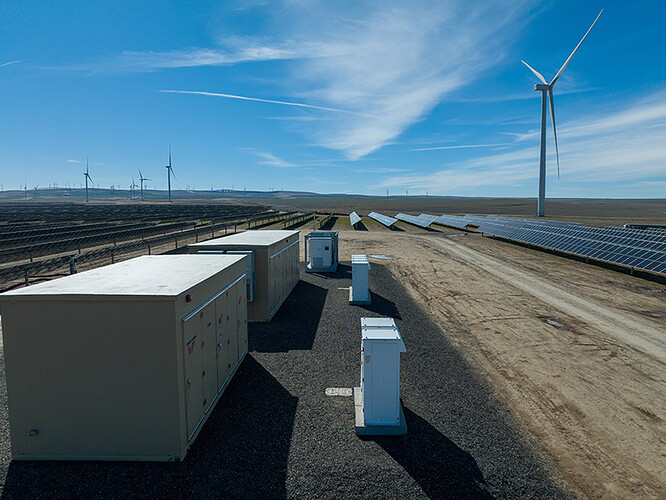 Instead of 275 MW from the batteries, it is only 30 MW. (About 5% of the coal plant capacity referred to in the OP). But, instead of 26 minutes of duration, it is a more respectable 4 hours.

Also, it looks like the state of Oregon is a net exporter of electricity. This is largely due to the hydro resources they have available along the Columbia River, and other locations. Therefore, they may not need to burn more natural gas to replace the coal plant. They just might not export as much power to California, for instance.