“A group of legislators in statehouses across the country have coordinated to introduce bills simultaneously in seven states later this week.
It’s a form of taxation never before attempted in the United States, in which very wealthy people would have to pay taxes annually on assets that they own, rather than just their income that year.

My first attempt was flagged. I assume because the title of the article mentioned Blue states. 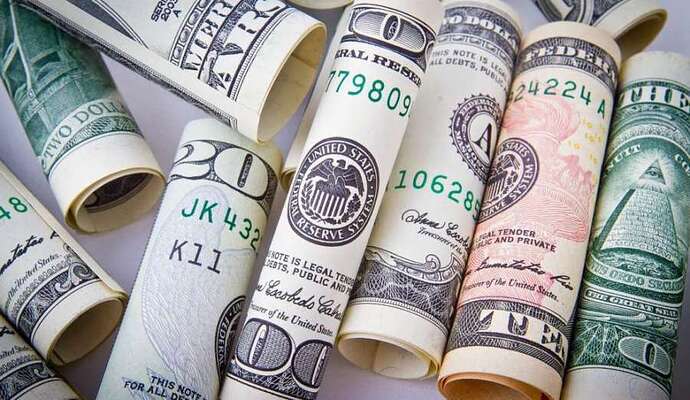 Wealth tax is imposed on all assets. There are 7 only countries in the world that impose wealth tax. Major concerns about the highly unequal distribution of wealth, combined with the need for greater tax revenues in many countries during Covid...

Could an asset tax stop the increasing inequality within the nation? Have a vibrant middle class is a key to a strong national economy.

Of Two Minds - Want to Know Where the Economy Is Going? Watch The Top 10%

The weblog, feature articles and books of Charles Hugh Smith

The Fed - Table: Distribution of Household Wealth in the U.S. since 1989

@tjscott0 you have written an interesting post. I should flag it because it violates METAR anti-politics rules on 2 grounds.

I think this wealth tax has a 1% chance of becoming law and that’s pushing it.

Please keep these rules in mind. The point is to prevent an outbreak of political partisanship on METAR.
Wendy 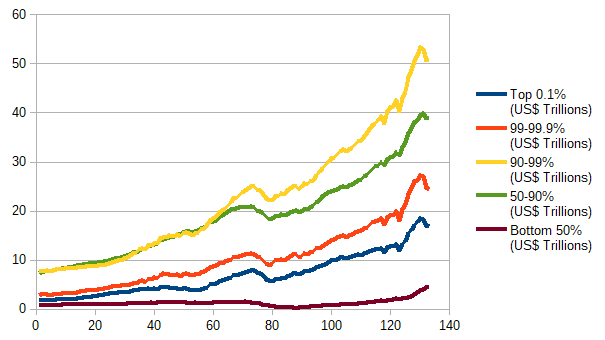 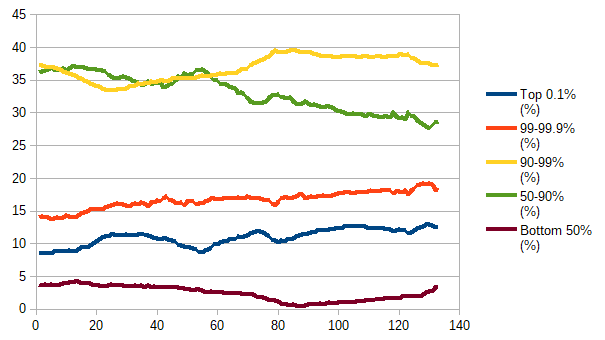 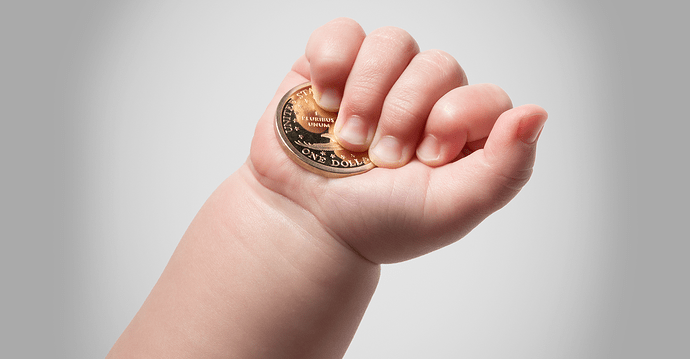 The 9.9 Percent Is the New American Aristocracy

The 9.9 Percent Is the New American Aristocracy

The class divide is already toxic, and is fast becoming unbridgeable. You’re probably part of the problem.

By Matthew Stewart, The Atlantic, June 2018

So what kind of characters are we, the 9.9 percent? We are mostly not like those flamboyant political manipulators from the 0.1 percent. We’re a well-behaved, flannel-suited crowd of lawyers, doctors, dentists, mid-level investment bankers, M.B.A.s with opaque job titles, and assorted other professionals—the kind of people you might invite to dinner. In fact, we’re so self-effacing, we deny our own existence. We keep insisting that we’re “middle class.”…

Notice that “the 9.9%” have more wealth than the top 0.1 percent. We have met the enemy and they are us. Do you think that the 9.9% will allow a wealth tax? Even if it’s only supposed to be on billionaires? All together, the billionaires only have a fraction of our combined wealth. Like Willie Sutton (the bank robber) the politicians will go where the real money is.

What’s the chance of the 9.9% voting for a politician who supports a wealth tax? Nada.

Some states had intangibles tax on stock value or similar assets. Property tax is an example on real estate. But business value can be problematic.

Michigan cities used to levy a property tax on commercial equipment. The Gov at the time, a “JC” himself, decided that was a “burden” so repealed the tax, promising the cities that Lansing would replace the lost revenue with money from the state use tax. Of course, what was defunded to make that use tax money available, to replace the local tax businesses paid, is a deep, dark, secret…just another Michigan (L&S) shell game.

It mentions “progressive” which is political.

Unfortunately the “progressive” word appears when I provide the link to the article. I thought of deleting the article but then board members could not read the article. It is the Main Street Media that wishes to provoke a reaction. They want conflict & have winners & losers. I long for Walter Cronkite, David Brinkley or Chet Huntly. Those guys would never make it in the news business now days. Too neutral in their reporting.

It is the Main Street Media that wishes to provoke a reaction. They want conflict & have winners & losers. I long for Walter Cronkite, David Brinkley or Chet Huntly. Those guys would never make it in the news business now days. Too neutral in their reporting.

@tjscott0 I agree with you. Neutral reporting is what we need.

My main concern is preventing a breakout of political partisanship on METAR. This causes a mess of pointless political arguing which does nothing to improve our investing results.

If METARs could read articles that mention political factions without themselves arguing over the politics we would not need this rule. But experience shows that unfortunately some METARs react to political statements like a bull with a red flag.

A group of legislators in statehouses across the country have coordinated to introduce bills simultaneously in seven states later this week.

As Paul said we have a wealth tax as a property tax. We are discussing a capital tax which is a bad idea.

Further it dilutes the urgency for a more progressive income tax and eventually a progressive capital gains tax. NOTE I am not talking politics or party or movement in a party. I am talking economic policies in the tax code which is very separate econ theory.

I am against another capital tax on top of capital gains.

The other thing to note lesser earners have tax shelters for their retirement. That is a progressive scheme in taxation.

We can not and should not expect everything out of one group rich or poor. We need to lower the class warfare. This is our country not our shuffle board game. People need to work and be taken care of that does not mean taking from the wealthy.

We are in a part of the cycle where all boats rise with the tide.

Take care of each other.

I agree with you. Neutral reporting is what we need.

My main concern is preventing a breakout of political partisanship on METAR.

Yep. And that’s why I use asset asset taxation rather the media’s preferred terminology “wealth taxation.” They want to create a reaction in their readers. I believe asset taxation is a correct neutral word.

We should be able to have a neutral conversation of asset taxation. Will such a tax reduce inequality and enlarge the middle class which beneficial to the US economy? Is there unforeseen, unintended consequences to an asset tax? How would an asset tax affect investing of the top 10%? That is important because that is where most of investment originates.

In the past, we have seen unforeseen, unintended consequences of legislation that has passed in congress. Or when our government changes IRS rules &/or regulations.

We are in a part of the cycle where all boats rise with the tide.

If you look at Wendy’s graphs. It has been quite a while since that has occurred. Like 40 plus years.
Also check out the Rand report: “Trends in Income From 1975 to 2018”
There is a link there so one may read it online or one can download a PDF file. 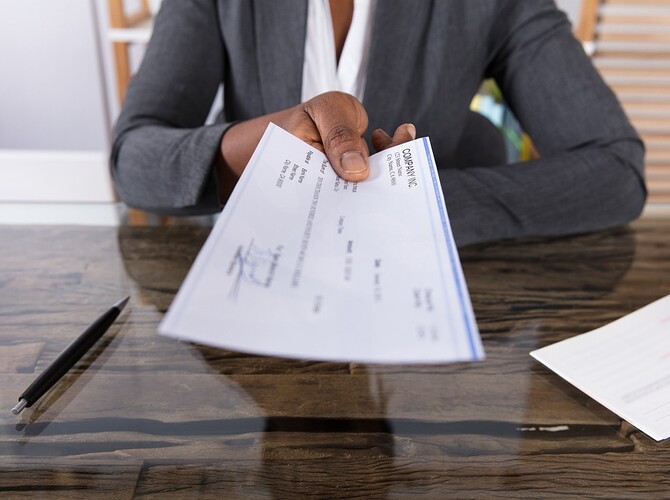 U.S. Economic Growth Has Not Been Shared Evenly Since 1974

For two decades after World War II, incomes grew at a rate close to the U.S. economy-wide growth rate. Anemic growth from 1969 to 1974 kept inequality in check. But since then, the benefits of growth have not been evenly distributed. Racial and...

Perhaps it is time to return to a time where all boats rise.
The key question is how to do that.

You are finally reading my posts.

Proposals are banned from METAR because they are often partisan, inflammatory and have little chance of passage. When a proposal is passed and signed into law it becomes operational and can be reported on METAR. Only when a law is passed can it affect the macro economy and our investments.

I think this standard is impractical. Surely we can discuss major economic issues without getting into politics.

Surely we can discuss major economic issues without getting into politics.

@pauleckler I have been the (unofficial) METAR board monitor since 2008 – 15 years, how about that!

I have, in the past, come back from vacation to find the board so deep in partisan political fighting that I needed rubber gloves to clean up the mess. Believe me, it’s much easier to maintain equilibrium than let things get out of control and then try to restore calm and order.

Several METARs are political animals to the bone. They can’t seem to help themselves. They can’t discuss major economic issues without getting into politics – unless they know their posts will be removed despite their cries of censorship. That’s why there is a strict no-politics rule on METAR.

They can’t seem to help themselves.

“Observe due measure; moderation is best in all things.”
– Hesiod

I strongly suspect that the reason this proposal is arising now is because of the impending retirement of Boomers. As a group they will have less income but retain their acquired assets. Also, Boomers are starting to leave their assets to heirs, frequently effectively avoiding capital gains taxes as well. Therefore, someone wants to tax those assets to replace the lost income tax and capital gain taxes.

I think taxing assets is a poor idea, especially when someone talks about taxing unrealized gains. Frankly, what irks me about taxes is how complicated they make it. I am so tired of having to fill out forms to figure out whether I need to fill out another form.

As for whether taxing assets would reduce inequality, we all know that the top 10% will come up with a strategy to avoid taxes, whereas the average middle class person won’t. So, no, in reality it won’t reduce inequality.

I think taxing assets is a poor idea, especially when someone talks about taxing unrealized gains.

But that is the primary way Texas raises taxes – on the value of my home. An unrealized capital gain.

But that is the primary way Texas raises taxes – on the value of my home. An unrealized capital gain.

It is clearly not a tax on unrealized gains.

If the value of my house goes up I pay more in taxes. Even though I did not realize my gain. My neighbor does not factor into this at all.