WOW! If you see anything uplifting in architecture, please place here and let’s make a thread of it. The Opera House and now this? 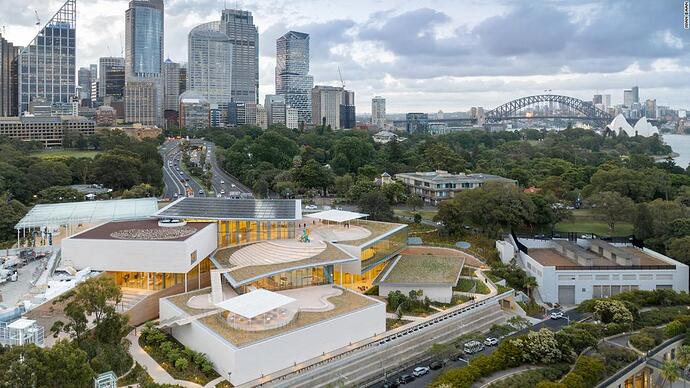 A decade in the making, the $230 million Sydney Modern Project has been touted as a cultural destination to rival the world's major art museums.

In a World War II-era fuel storage tank deep beneath Sydney, the smell of gasoline still hangs in the air. Pulsing lights sweep the cavernous space to reveal fragments of “The End of Imagination,” an installation by Argentine artist Adrián Villar Rojas. Five twisting sculptural forms, born from a digitized future of Rojas’ creation, emerge out of the darkness.

Now known as the Tank, this 24,000-square-foot former naval bunker has been transformed into an exhibition space as part of an ambitious redevelopment of the Art Gallery of New South Wales. Dubbed the Sydney Modern Project, the 344-million-Australian-dollar ($230 million) expansion has been described by state officials as the city’s “most significant cultural development” since the famous Opera House opened almost 50 years ago.

The gallery’s original 19th-century structure now sits at the center of an art museum campus. A huge new building, which opens to the public on Saturday, almost doubles the available exhibition space, while three art pavilions hug the hillside, sloping down toward the harbor.

The redevelopment was designed by Pritzker Prize-winning Japanese architects SANAA, who sought to create a building that “breathes with the city, the park and the harbor.” The bright white for which the firm’s buildings are known seems to blend with the colors of Sydney’s ubiquitous sandstone.

Not for nuthin’, but I’ll just note that the Sydney Opera House is pretty much a bust. The larger shell was designed for Opera, the smaller for symphony, but after construction was started they realized that the audiences for opera are small, and for symphony are large, so they switched them. Unfortunately the interiors were designed differently: the opera house requires sonics for voices, often solo, while the symphony requires acoustics for orchestra.

Both are stunning externally. Internally, where the sound is, maybe not so much. Of course that has been true of many music halls, the Lincoln Center Geffen Hall now on its third try after a multi-multi million dollar internal refurbish, for example.

Our local Sonoma State University is home to this beauty, exceptional sound, beautiful woodwork… It opens to outdoor seating…

Yes! Screenshot from wecoguy’s link above: 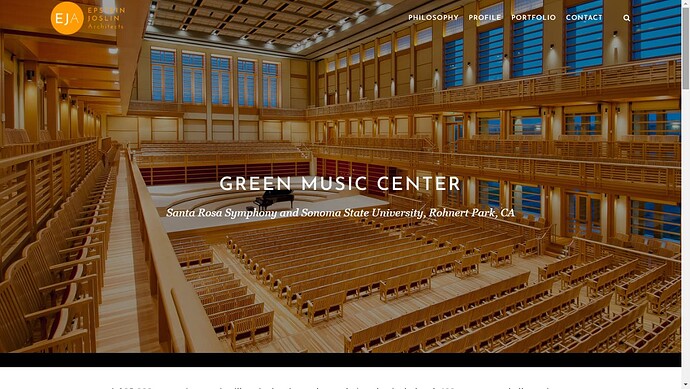 It is truly beautiful, and the craftsmanship is perfection… Every joint is tight and right… Whether it’s the Beach Boys or a solo guitarist or originally it was YoYo Ma, and all are very happy with the sound… High Schools in the area do concerts from time to time, too… There are Opera seasons, it’s all been a boost to local and National artists…