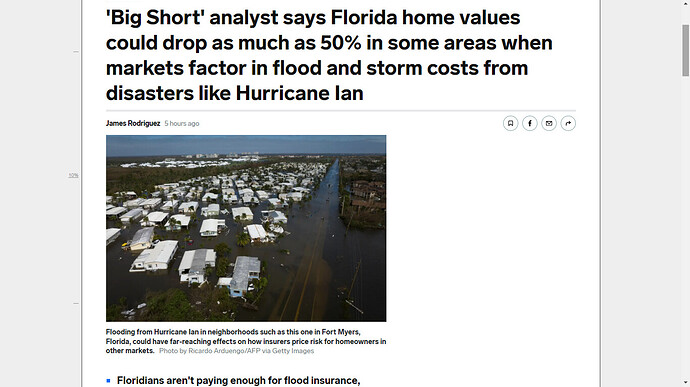 Hurricane Ian left a trail of destruction across Florida, but the state’s housing market has yet to feel the brunt of its impact.

Property values there haven’t accounted for the rising costs of homeownership, including inevitably higher costs of insurance to cover the risk of flooding from disasters like Ian, according to an analysis by DeltaTerra Capital, an investment-research and consulting firm led by a former Wall Street analyst who predicted the 2008 housing crash.

When insurers jack up flood-insurance premiums to more accurately cover their expected costs, sticker shock will ensue, DeltaTerra said. Home values in some of the highest-risk areas of the state — leading with the Fort Myers region that bore the brunt of this week’s storm — could drop by as much as 50%, it said. 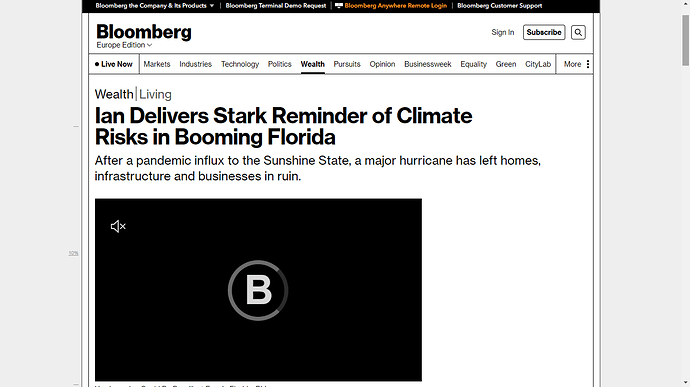 For Florida’s newest residents, Hurricane Ian is serving as a harsh reminder of the risks of living in a state where sunshine and low taxes have drawn an influx of Americans the last few years.

Thousands of people, from Wall Street financers to everyday folks, moved to the Sunshine State during the pandemic, lured by its lower cost of living and year-round warm weather. Now, they’ve encountered what may be one of the costliest and most powerful hurricanes in US history.

The storm caused extensive flooding, particularly on Florida’s Gulf Coast, and left millions of homes and businesses without power. With houses and infrastructure in ruin, estimates on the damage are as high as $100 billion. For many of the newcomers, it’s their first major natural disaster in a state that’s particularly prone to climate risks yet still has attracted throngs of people and businesses.

Florida’s climate risks mean the influx of newcomers from more expensive states will discover that it’s not such a bargain, said Jesse Keenan, associate professor of sustainable real estate at Tulane University in New Orleans.

Sales and property taxes will have to go up to pay for infrastructure needed for the largely unrestrained growth Florida governments have permitted, along with costs for rebuilding, he said. The estimated losses from Ian’s wind and storm surge are $28 billion to $47 billion, making it the costliest Florida storm since Hurricane Andrew three decades ago, according to CoreLogic Inc.

“If you moved to Florida for the cheap housing and the sunshine, there’s going to be a sticker shock,” Keenan said. “Between property insurance and local taxes, you’re going to pay for these costs one way or other.” 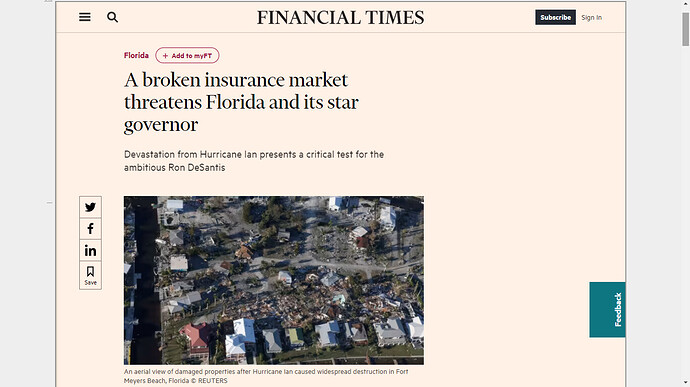 “It’s a massive storm,” the governor said on Thursday night, noting that the first 72 hours of the recovery were “really about life safety, and then working to restore the main services”.

He has halted attacks on his regular foil, Joe Biden, whom he is now courting for federal aid. Asked whether he would meet the president, DeSantis said: ‘At the end of the day, we want all the support we can get.”

Making that dance more awkward is the fact that in 2013, as a Tea Party Congressman, DeSantis prompted fury among many northeastern colleagues by voting against a federal relief package for Hurricane Sandy, which devastated New Jersey and New York.