China Covid: Millions back in lockdown as Beijing doubles down on zero-Covid 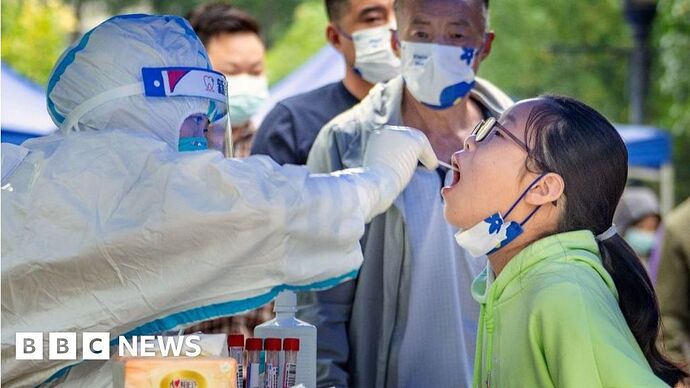 China Covid: Millions back in lockdown as Beijing doubles down on zero-Covid

Dozens of cities across the country have been affected by varying degrees of restrictions.

With people in my part of the country not masking, I expect COVID and flu cases to put hospitals in trouble again this winter. Might need to stock up on toilet paper and other staples too. I hope the teachers can switch to Zoom classrooms again.

Saw a headline in my travels last night, Xi is about to start explaining the new reality of China to the public. Xi is all about social control as the economy crumbles permanently. One point four billion people with nowhere to go.

With people in my part of the country not masking, I expect COVID and flu cases to put hospitals in trouble again this winter.

If you haven’t noticed, the media has been in full hysteria mode, daily, for the last 7-8 days over RSV, almost to the point of skipping the daily “severe weather” hysteria.

Get your shots and move on. The people that refuse the vaccine’s are the ones who will pay the price, The rest will just live through it. We have friends that refused the Vaccine and now have had Covid 3 times. Every time it was bad. We have all our shots, boosters and had it once and it was very mild.

One Fool who is with us at the Retire Early Liberal Edition group on Facebook (opened after the Fool closed their own board) has a daughter living in China and she occasionally gets a picture out of what’s going on there.

The one that sticks in my mind is of an endless line of people, single file, apparently in some sort of mini-haz-mat gear, standing and waiting to be admitted to some store (grocery?). It was pretty creepy, the line going for blocks and blocks (picture taken from upper floors of a high rise) and knowing that all those people were shuffling forward a half step at a time, hoping to get in to whatever the destination store was.

That report sent me looking for more information. The BBC report was the one I chose to share, but there were others.