Chinese imports and the velocity of money a corrolation

A chart of Chinese imports

Imports to China edged up 0.3 percent from a year earlier to USD 238.01 billion in September 2022, the same pace as in the previous month and below market expectations of 1.0 percent increase, due to subdued domestic consumption, rising import prices...

A chart of the velocity of M2. 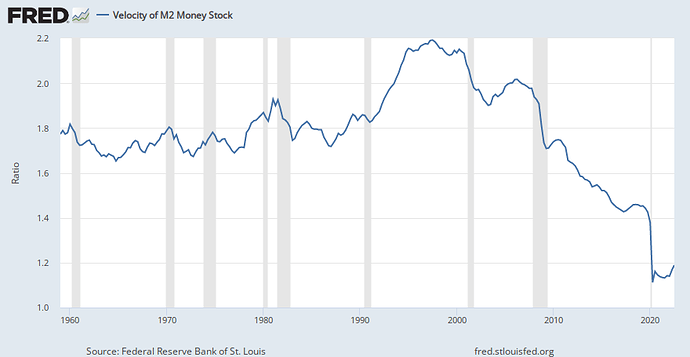 Normally, we expect money to flow in an economy in a circular fashion.

But, Japan first the China have thrown a wrench or an escape chute into this cycle. Normally if we increase M2 we get an increase in inflation, but we have been increasing M2 for a long time. 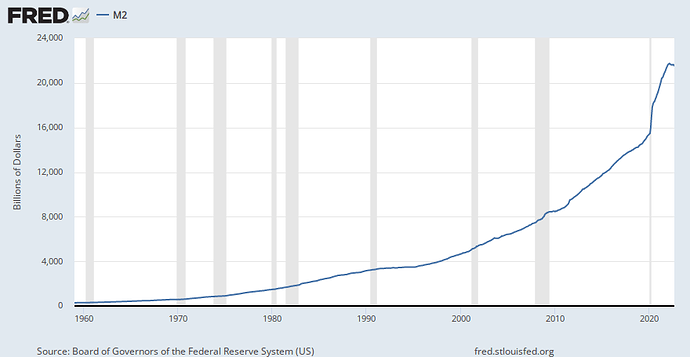 I do not recall who said it, but I do recall the statement. “We are exporting inflation to China.” Another way to say it is “China labor is absorbing our inflation due low labor costs” This was mostly true. However, I believe it is not the whole story. China also absorbed and buried a lot of our M2 and in so doing killed the Velocity of Money inside our economy. In other words the money even if it could have been captured in the Velocity metric used at the Fed, simply quit flowing in a cycle and ended up in giant ghost cities and massive public works projects in China and as part of the One Belt One Road.

Now that is over, the Velocity of Money is starting to pick up. If the late 1960’s and early 1970’s are an indication, it must pick
increase by 50 percent from where it is. As the Inflation Reduction Act along with the lessons from Covid and the Ukraine war are pulling a lot of the supply chains back to the United States and China is no longer pouring captured dollars in the concrete ghost cities (metaphors here, the actuality is much bigger) the Velocity of Money will increase and there is nothing that the FED can do about it. To control inflation the FED must pull the one lever it has, M2. M2 is very large for the size and speed of growth of the economy, so even a real decline in M2 will not stop inflation. It will take a dramatic and sustained decline in M2 to rein inflation.

I am not sure that the Fractional Reserve banking system can take that. This is a sea change that I have not lived through since I got my first paycheck in 1975. In fact, I am not sure there is any historical equivalent anywhere in history.

So I have made two assumptions, either or both could be wrong.

These could be wrong, in fact they probably are.

If anyone can delve in and show different money flows and their impacts I would be interested.

Q,
I fear you may be right. Between China’s economic problems and their COVID challenges they are no longer acting as a catch basin for USD’s. I remember the beefs about how their stockpiling of US T bills was somehow “owning” the US. Maybe so, but consider the alternative over the past few decades.

It will take a dramatic and sustained decline in M2 to rein inflation.

The Fed has some $8+ trillion in bonds that they have said they will be selling or allowing to mature without corresponding re-purchases. I believe that process will reduce M2. Looking at the chart of M2, it seems that the Fed has the ability to reduce M2 by about 1/3.

So the Fed does indeed have a lever available to sop up an awful lot of M2.

The Fed can also adjust the reserve requirements at banks to reduce M2. That’s a much bigger hammer to wield, and I suspect it’s unlikely to be put to use unless inflation remains a problem after they’ve used increases in the Fed Funds rate and sold off a fair amount of their bond portfolio.

While I agree with your analysis in general, I’m not too worried about the Fed’s ability to reduce M2 to combat inflation as monetary velocity increases back toward historical norms.

The Velocity of Money and M2 have a mathematical relationship that outputs inflation.

V, the velocity of money, is related (by definition) to the money supply and GDP rather than inflation.

I’m not sure how you get inflation out of that.

V x M = GDP
I’m not sure how you get inflation out of that.

That relationship isn’t exact. I’d put “real GDP x inflation” on the right side of the equation.

In classic theory, you need to increase money supply to allow GDP to grow. But too much money overheats the economy resulting in inflation, because production can’t keep up with that additional money.

This is why some 2-bit economist somewhere said that inflation is monetary phenomenon.

Excellent write up and correct in its summation except that we were using China.

The current reality China has hit a wall and is no longer growing as a manufacturing power. We will be. We will be creating the deflationary force in manufacturing for the globe going forward.

We will be creating the deflationary force in manufacturing for the globe going forward.

I can see where a lot of the technology being built in the next 10 years will be deflationary, but I don’t see that we will be either a labor sink, i.e. low cost producer, or a money sink, pouring money into projects that sequester it from immediate circulation.

Just the opposite, I see labor gaining wage and money capture over capital and that the shortening of the supply chains will increase the apparent velocity of money.

Worse, (for the FED in its inflation fight) the invested money will have very quick returns and will move back and forth much quicker in a national economy rather than a world economy.

For example, Ram, and Mercedes are targeting 600 mile electric cars. Soon like 2024 models. These should be competitive with diesel engine trucks by 2025 or 2026. I expect these to have a deflationary impact on the world economy.

The solar industry is expecting to have 3 times the solar that is currently installed in the next 7 years.

I did a quick search, it looks like 3 percent of the U.S. electricity is being produced by solar. I would say that should be 9 percent by 2030 but that would be grossly inaccurate. First, that 3 percent includes concentrated solar arrays and the prediction about tripling is about roof top photovoltaics. Second, the tripling is an absolute number and is static, but the amount of electricity in the U.S. is likely to rise a lot in the next 7 years due to the proliferation of EV’s. In any case the rise will create wealth and do it with less work because all the work to mine and refine crude oil will be stripped out of the economy.

The above is just one example of deflationary forces and does not include the economy being zoomified and the long demographic march.

While I agree with your analysis in general, I’m not too worried about the Fed’s ability to reduce M2 to combat inflation as monetary velocity increases back toward historical norms.

I know they can do it. What I don’t know is can they do it without breaking the banking system. Breaking the economy and throwing the U.S. into a major recession is one thing, and while painful, an acceptable outcome. However, if a side effect is the breaking of the fractional reserve banking system either by blowing up derivatives or some other method then we have a significant problem.

What I don’t know is can they do it without breaking the banking system.

I’m not sure what your concern is here. The Fed tweaks the reserve requirements at least annually to account for inflation. And they can adjust further as needed to manage the money supply.

How would the Fed break the banking system?

In China the labor rates rose for decades. That was not a source of major inflation.

The manufacturing will take off in this country because of reinvestment. With automation it will be deflationary. With more and more production in the US there will be economies of scale. One such economy of scale is the infrastructure usage will go up in relative terms faster than the costs of infrastructure.

Manufacturing is by definition a deflationary force because of never ending improvements in techniques. As the US GDP growth climbs much higher for most of this decade we will get major advantages from the reinvesting of capital and expensing deductions against corporation taxes.

How would the Fed break the banking system?

Sudden anything destabilizes the banking system. Deflation of any sort is kryptonite to the banking system , a 2 standard deviation from the norm toward deflation would trigger all sorts of things in the system. I don’t know what they are, just know that there are things that I do not understand, derivatives are what we have talked about in the past, I suspect that those will not be the problem, rather some other thing.

The problem I am seeing with the velocity of money being uncontrollable and moving in a direction that no one in power had seen since they first went to college in 1965, is that to counter it, the FED will have to reduce liquidity to levels that no one has seen in their entire adult lives.

That would be an outlier and would be down there in the second or third standard deviation in the bell curve. As such the mathematical risk management models will not be ready for it.

I see what you are saying, and if this cycle remained world wide, I could see it not changing the economic environment. However, if the manufacturing and consumption were mostly inside the U.S. wouldn’t that dramatically increase the velocity of money?

It seems you have two forces forcing the velocity of money up.

1 The quick round trip from manufacturer to consumer.

However, if the manufacturing and consumption were mostly inside the U.S. wouldn’t that dramatically increase the velocity of money?

In a different way than you are assuming, yes. The general public in America in 2019 some 60% were earning less than $40k per year. The improvements in the wealth of the middle class will improve the velocity of money more than anything else. That means having an industrial policy. We need to produce our way out of our troubles.