CRWD is getting punished after hours, down 18% as of writing.

But I don’t think this quarter was that bad in the context of today’s recessionary environment.

Probably the worst take away here is that 8-9% revenue growth QoQ may be the new normal for CRWD. And when full year guidance for 2023 comes out, it could be even weaker than we’ve been accustomed to.

But I think some revenue growth weakness is to be expected in a financial downturn. So for me personally, I think I’m fine with 8%-9% revenue growth, especially since it comes with sound free cash flows and growing non-GAAP net income.

Given the PANW results did not show the QoQ drop, I’m concerned CRWD may be losing share. Thoughts?

Kurtz repeated expected move by Enterprises to consolidate, so I can see Palo Alto benefiting from this.

Crowdstrike management just kept saying that their “winning more in SMB space” and Net new ARR was so low due MacroEconomic factors on SMBs (watch out SentinelOne reporting in a couple days?).

But I still like Crowdstrike around 10% of my portfolio, after a quick run through the release and Conference Call.

Here are some explanations for the weaker than expected results from CRWD:

Also, CRWD is modeling continued weak macro in Q4. I think the results show that SaaS and cyber are not immune to weak macro leading to caution among customers. I suspect that it could get worse but we’ll need to see.

I don’t understand why nobody mentions that this is a company that will make over $2.2bn in revenues this year (with probably something like $600m of free cash flow – they’ve made over $467m YTD, so I don’t see why they can’t reach that for the whole year), and that slowing down at this scale is physiological. Yes, there’s obviously a macro component, but we simply cannot expect that a company keeps growing like this forever. They’ve added 1460 new customers in the quarter: that’s lower than in the prior quarters but still an outrageously high number. Most importantly, the average revenue per customer (which, to me, is a simple yet reliable sign of business health or deterioration) is in line with the prior quarter. So, they’re experiencing delays in their sales cycles? Everybody is saying that. That’s no surprise. But sales delays doesn’t mean that customers are cancelling their subscriptions (these are mission critical – who in their right mind would cancel their security purchases and run the huge risk of getting attacked, in order to save some money??). Sorry for the ranting, but mine are all common sense considerations. I think that, in general, there must be a point when the market (and that’s all of us) decides to come to terms with the fact that a slowdown in growth is in the cards, once a company has reached a certain size, and that punishing that with a -20% is way too much. But it’s hard to understand when that point comes for a company. I think that right now the market is hyper sensitive to even the slightest sign of apparent deterioration. I would worry if a significant slowdown in revenue growth were NOT accompanied by positive and high(er) free cash flow. But this is not the case for CRWD. 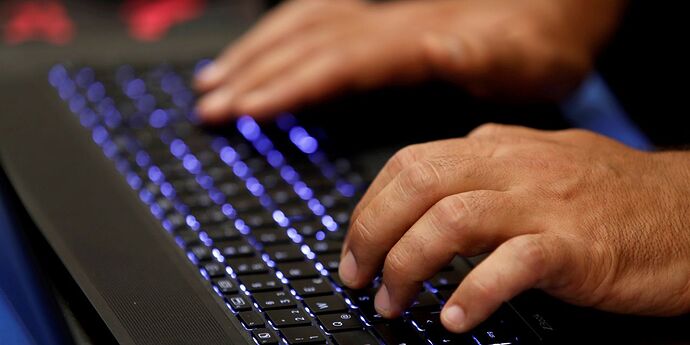 Disappointed to see Palo Alto mentioned here and not CrowdStrike but the point is, the cost of delaying cybersecurity expenses is astronomical. Every govt - local, state, Federal pretty much around the world needs to make this a priority, to dig deep and find the money or risk spending 100x more. What is happening in Suffolk County (Long Island) New York is a disaster harming every aspect of life - licensing, home buying, social services, 911 call centers. It sure does seem though that CRWD has become more of a great, classic Fool style stock, one we can hold for long haul with relatively low worry than a hyper-grower. Seems the competition in the space is massive. Personally I only own NET, DDOG and SNOW but tried to play earnings figuring Cyber is far less in danger of recession. But a prompt 18% haircut on this with my other short term play S getting hit too is par for the course these days. An atrocious, foul year.

I don’t understand why nobody mentions that this is a company that will make over $2.2bn in revenues this year (with probably something like $600m of free cash flow – they’ve made over $467m YTD, so I don’t see why they can’t reach that for the whole year), and that slowing down at this scale is physiological. Yes, there’s obviously a macro component, but we simply cannot expect that a company keeps growing like this forever. They’ve added 1460 new customers in the quarter: that’s lower than in the prior quarters but still an outrageously high number. Most importantly, the average revenue per customer (which, to me, is a simple yet reliable sign of business health or deterioration) is in line with the prior quarter. So, they’re experiencing delays in their sales cycles? Everybody is saying that.

Well said! Growing slower because of scale and this crummy macro, but still growing! The valuation at $110 or $115 whatever (well under a $30b mkt cap) seems very, very low, even based on 600m of FCF, which again, will grow substantially next year. That would be a roughly 50x FCF multiple which is what we see for companies that are growing at more like 20%.

Some will worry that Palo Alto (or some other competitor) is beating them. It’s not impossible…but I just don’t think weaker numbers in the current environment are proof of anything. 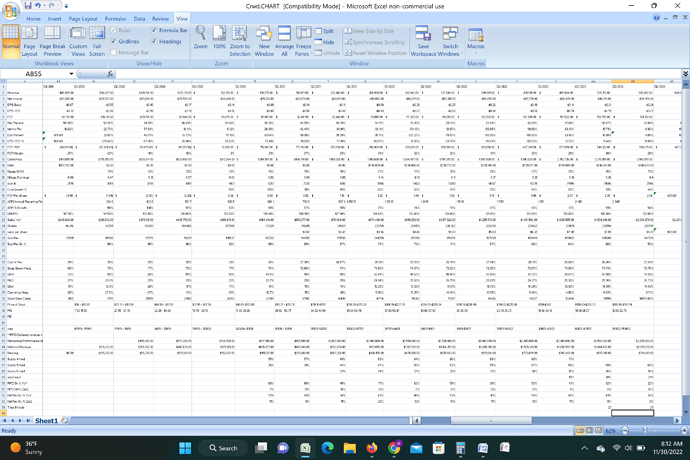 Isn’t cybersecurity supposed to be more macro resilient than we just witnessed for CRWD’s Q3?

PANW delivered a beat and raise. CRWD failed to do so and did the exact opposite, a miss and drop in outlook.

Why are we moving goalposts and making macro excuses for CRWD’s disappointments?

Look at PANW:
Their NGS ARR grew 67% YoY at 2.11B and with higher NGS ARR guidance range for the year.
Full year revenue guidance was raised.
Net new ARR continued to increase

Look at CRWD:
Their ending ARR grew 54% year-over-year to reach $2.34 billion.
Full year revenue guidance was NOT raised.
Q3 net new ARR came in below management’s expectations. They grew it by a pathetic 17%, while the last 4Q average was 44%!!!
Q4 net new ARR will be below Q3 by up to -10%.
CRWD also expects a low 30s ending ARR growth rate and a subscription revenue growth rate in the low to mid-30s for FY '24.

And keep an eye on the SBC. CRWD had to grow SBC expense by 62% YoY, higher than its 53% revenue growth YoY.

Also, in the calls, PANW was upbeat about hiring in the face of macro:

“ …we are seeing customers spend more time trying to understand what they’re spending money on. There’s more questions, the CFOs are getting involved…what we have done is, because of that behavior, we have increased scrutiny internally, we’ve increased efforts with our sales teams to get ahead of this, and we’re just increasing the activity of execution. We front-loaded our hires. We hired 550 direct sales rep as quickly as we could in the quarter because we think this environment is going to continue. And the only way to fight this is to get more coverage out of the field. Get work coverage, get more focus on getting deals done, get them across the line.”

Meanwhile CRWD was “significantly slowing the pace of new hires needed to execute our plans.”

Interestingly, on the Blind website, ‘rumors’ were already abound earlier this month of hiring freezes at CRWD.

A stark contrast to the rumor last month of a frantic hiring pace at PANW.

On whether they are losing market share–just a couple of thoughts.

I was wondering if you could dig just one level deeper into any competitive data that you’ve reviewed kind of looking back in the quarter. Do you feel like any big competitors here like Microsoft or perhaps even smaller next-gen competitors are having an impact?

So again, if you look at what we’ve seen and what we’ve commented on, the inherent demand for our products remains strong. Obviously, there’s an increase in the macro headwinds.

We talked about some of the smaller customers having elongated sales cycles. We saw 11% increase in days to close. And those are delayed deals, not lost deals. And on the enterprise, again, we’re seeing consistent win rates.

They remain high. And in fact, in the smaller customers, we’ve actually seen them significantly improve quarter over quarter. So, from our standpoint, and we look at this very closely, as you might imagine, the landscape remains favorable to us. I really don’t see another true consolidator like Falcon.

And customers are looking for technologies that reduce costs, reduce complexities, actually work and stop breaches, and that’s what we’re delivering. So, again, when we look at the competitive landscape, it remains favorable to us. And as we pointed out, we saw increased macro headwinds, and that’s what we talked about.

I’m reading between the lines, but my interpretation of that answer is:
“We win consistently, but not always. Smaller customer counts are improving; and while there’s lots of strong competition and some deals go elsewhere, there is no one else who can consolidate cybersecurity needs onto one platform. We won’t win every deal, but we’re very well-positioned to keep and gain market share because of our ability to consolidate everything onto one platform in a way that saves money and reduces complexities, while still topping the charts in stopping breaches. Nobody beats us on that trifecta.”

CRWD is a 15% position for me. Kurtz mentioned they are still very early in the game, and I believe him. I’m happy to hold what I have and maybe add some if the punishment of the price continues until I have new money to add.

A question I keep asking myself as the earnings have come in for this quarter. We talk about price anchoring a lot. Have the glory years of the bull market that began crashing a year ago caused us to “growth anchor” on this board? We might still expect SaaS companies to outperform, but was the hypergrowth of the last few years as inflated as the stock prices had become? Does it make sense to not anchor on those high stock prices while still remaining tethered to the growth rates of that time? Just something I think about.