The Congressional Budget Office release a new report on trends in the distribution of wealth. The 80/20 rule, Pareto principal, etc all say we should not be surprised that the few wealthy have a larger fraction of wealth than the poor mass. But none of those broad brush ideas explain what determines the specific fraction, why it changes, and how societies can tune it.

The new report lets me test my favorite new feature on these otherwise frustrating new boards. Pictures! But I notice that the preview feature is gone so who knows what this will look like when I post it. 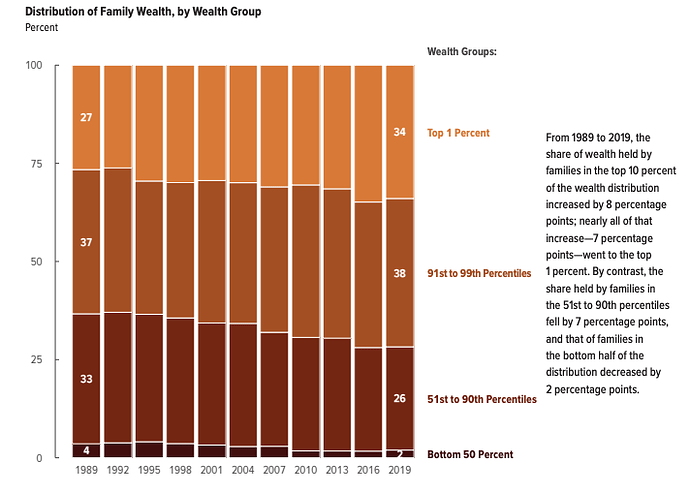 No surprise, really, we all know inequality is getting worse.

That distribution is what is required for “supply side economics”. We are told that only the rich now how to use money, so the rich should have all of it.

As reported on the news the other day, the UK has the second highest skew of wealth among industrial democracies, only exceeded by Shiny-land. Seems the new PM is determined to make the UK #1, in a hurry. The Beeb’s take on recent pronouncements is the PM’s crew sees no problem in the market reaction to their “JC” focused tax cuts, so there is no reason to change their policy.

Since the 1860s, the real beginnings of an industrial America, we have had schemes for the distribution of our newly found wealth. The Great Depression skewed the realities of being wealthy in America. We came into the 1950s determined to build a modern nation state. It took the wealth from the wealthy. I might add to a larger extent there was a willingness among the wealthy.

What has happened over the 1981 to 2020 supply side period is repugnant to the industrialists. The decline is not flattering to them. The shift to demand side economics is welcomed by many of them. It spells greater opportunities.

Now, just for fun, divide each of these tranches by 12 to rationalize them into 1972 dollars.

Back then, the wealthy were known as “millionaires” or (if they were filthy rich), as multi-millionaires. Below that tranche came “upper-middleclass”.

In another thread, I pointed out that because of inflation, for all intents and purposes, any coin less than $.25 was worthless, despite it having a reasonable purchasing power a century ago.

So, in today’s dollars, a “wealthy” person would be worth $12 million and an ultra-wealthy person would be worth around $25 million dollars - coincidently around the levels that international “private” banks use to differentiate the wealthy and ultra-wealthy today. Just because one is worth more than two million dollars today doesn’t mean that they are wealthy enough to have full-time servants - a perk even the upper middle class could afford during the beginning of the last century.

Don’t get too carried away by the numerical value of a pile of USD today.

Don’t get too carried away by the numerical value of a pile of USD today.

We really old phartz remember an early 60s TV series called “The Millionaire” where average people have their life changed by the gift, from an unknown benefactor, of $1M.

The not so ancient, may remember a short lived TV series from the early 70s “Arnie”, staring Herschel Bernardi, as a factory worker, who is suddenly promoted into upper management, at the mind-boggling pay of, iirc, $20-$25,000/yr. At that time, my dad, a college graduate working for a sizeable company as an application engineer, was pulling down about $12,000.

In spite of many USian coins being worthless, as in nothing can be purchased for one of, the conspiracy theorists would come flying out of the woodwork with their hair on fire if the coin’s distribution was stopped, sure it was some “big gummit plot to rob us”. I therefore propose that, like any other banana republic, new Bux be distributed in place of old Bux, at a 1 for 10 ratio, so people can buy stuff for the same price their paid when Shiny-land was the way they remember it.
/sarcasm