The Drax power plant was one of the UK’s largest coal-fired power plants. But they stopped, or mostly stopped burning coal. Today, the plant burns wood pellets. Wood is supposed to be greener and is sustainable.

An investigation from the BBC raises questions as to how green this method of producing electricity really is. 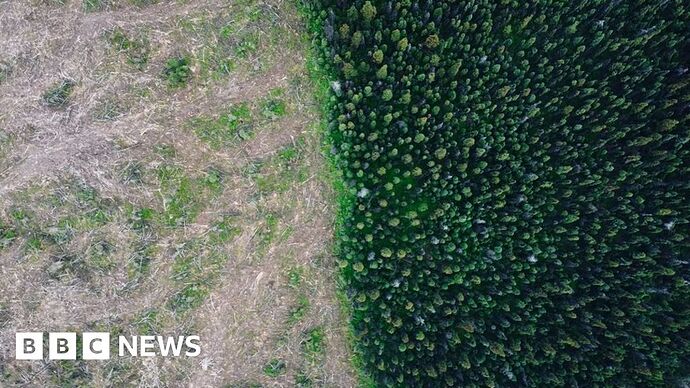 The owner of the UK's biggest power station, Drax, is cutting down key forests in Canada.

A company that has received billions of pounds in green energy subsidies from UK taxpayers is cutting down environmentally-important forests, a BBC Panorama investigation has found.

The BBC has discovered some of the wood comes from primary forests in Canada.

There are arguments, and counter-arguments presented in the article. However, I don’t think it can be argued that burning wood produces CO2. That CO2 may eventually return to the forest, through photosynthesis. But for the next several decades, that CO2 being produced right now will contribute to the greenhouse effect of warming the atmosphere.

Recall that in the early days charcoal was used to process iron. The iron industry denuded Britain’s forests creating a shortage if firewood. Leaving the poor cold and hungry.

It seems ironic that UK would consider wood chips as fuel given that history. Yes, they must plan to import those wood chips. Canada has abundant timber. But transportation costs (and emissions) must be high.

Biomass can also be pelletised grasses. Similar to charcoal brickets which are glued together with starch (probably from corn). Then the question becomes what crop gives the best solar yield (on non-crop land) in a given climate, soil, growing season, etc.

Biomass is popular with the people in charge of controlling the power grid, because the power plants are consistent and dispatchable. Solar and wind are neither of those things.

Balancing demand with just the right amount of supply is important for maintaining a stable grid. Therefore, the rules are written to allow wood chips to be considered sustainable fuel, even though the reality is somewhat different. The charade will continue until a truly low carbon, reliable and dispatchable power source is considered. The EU has begun to inch down that road, with the inclusion of nuclear energy in the green taxonomy.