Germany Is Dismantling A Wind Farm To Make Way For A Coal Mine | OilPrice.com

In what has been described as a “paradoxical” situation, Germany is dismantling a wind farm to expand a coal mine

A wind farm is being dismantled in western Germany to make way for an expansion of an open-pit lignite coal mine in a “paradoxical” situation highlighting the current prioritization of energy security over clean energy in Europe’s biggest economy.

The dismantling of at least one wind turbine at the wind farm close to the German coal mine Garzweiler, operated by energy giant RWE, has already started. RWE says that lignite, or brown coal, has been mined from the Garzweiler coalfields for over 100 years.

RWE also said at the end of September that three of its lignite-fired coal units that were previously on standby would return to the electricity market on schedule in October.

So one wind turbine is a wind farm? I guess it is when you’re writing click bait.

Sounds to me like the first of many wind turbines at this location is well on the way to being dismantled. Disassembly of these giant turbines has to be dangerous work, so I am guessing the team removing these windmills are all studying how the first one is taken apart. Sort of like having an OR with 20 new doctors standing a floor above, watching an experienced surgeon take tumors out of someone’s body…

This entails more than just disassembling one wind turbine. This earlier link says towns and villages will be demolished as well: 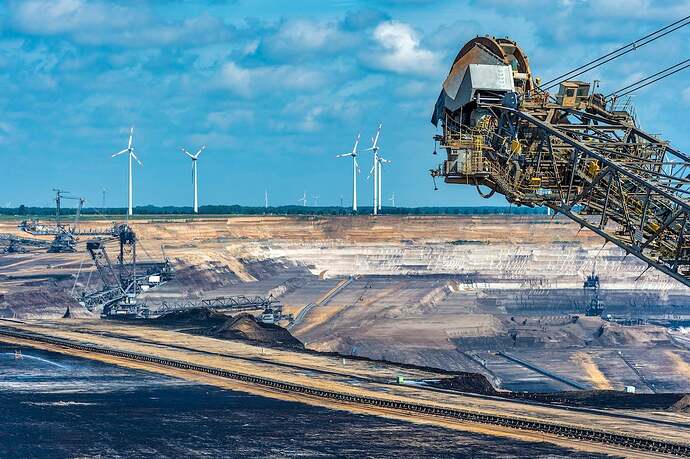 A wind farm in western Germany is being dismantled in order to make way for the expansion of an open-pit coal mine.

To make way for the expansion of the Garzweiler coal mine, the populations of several communities west of Cologne were relocated, Balkan Green Energy News reported. RWE is also demolishing the town of Lützerath and its surrounding area.

The wind park consists of eight turbines. One turbine has already been dismantled and two others will be removed next year, said a spokesperson for wind park manager WPD, reported The Guardian.

The five remaining turbines were expected to be dismantled by the end of next year, said a spokesperson for the builder and operator of the remainder of the wind farm Energiekontor.

It’s just stunning. How do they think, what is the rationale for, it’s better to expand the most destructive environmental energy source by far - than reactivate the reliable, safe nuclear power plants the Greens forced deactivation of? There must be some glaringly obvious reason I’m not aware of… right? Dear God…

I’m actually more stunned that villages are being demolished than wind turbines. In the U.S. these days it would take ten years of litigation to demolish one house.

In the U.S. these days it would take ten years of litigation to demolish one house.

Given the steep decline in rural populations, you might be surprised at how many abandoned houses are out there from the days of the horse. In rural Missouri the combination of lower birth rates and much larger farms from mechanized farming has caused the population density in rural counties to fall from 30/sq mi in 1900 to 8/sq mi in 2010. And current trends suggest we are headed for 2/sq mi.

Many abandoned houses are falling in. Demolition is not out of the question. Or leave the job to the termites. When you have people to rent them, you can sometimes keep them livable. But plumbing, heating, air conditioning, wiring, internet, etc, etc make them difficult to maintain.

Consolidating schools may be coming. But time on school bus is a limit. Difficult for businesses. Fewer customers. Harder to support a doctor or a hospital. Not much manpower for local industry.

People are moving to the cities or at least commuting distance. Big changes are coming.