Is the U.K. a contrarian buy?

There’s nothing quite like a crisis for producing contrarian buy points. Is this true of today’s U.K.? If so, what’s the best way to take advantage of this vulnerable moment? U.K. Markets Are On Sale. Nobody Wants to Buy.

Valuations on U.K. stocks and bonds are at historical lows, but investors are wary over government borrowing plans and the end to the BOE’s bond buying.

U.K. Markets Are On Sale. Nobody Wants to Buy.

Valuations on U.K. stocks and bonds are at historic lows, but investors are wary over government borrowing plans and the end to the BOE’s bond buying

U.K. stocks and bonds are trading at their lowest levels in decades. That hasn’t been enough to entice investors back into the market.

Since Liz Truss won the race for prime minister in early September, the U.K.’s FTSE 250, a broad index of domestically oriented stocks, has fallen nearly 10%, outpacing losses for the Dow Jones Industrial Average and S&P 500. The yield on 10-year U.K. government bonds surged this month to its highest level since 2008. Meanwhile, sterling is hovering at its lowest level against the dollar since 1985.…

Investors had already been retreating from U.K. assets in recent months as they weighed risks building in the economy. These include decades-high inflation, growing risk of a recession and a looming energy crisis. …

On paper, U.K. stocks, bonds and the currency look inexpensive on a historic basis. The FTSE 100 on Thursday traded at 8.8 times its projected earnings over the next 12 months…that is lower than 15.7 for the S&P 500 and the 11.2 multiple for an MSCI Europe index that excludes the U.K…[end quote]

The government and financial authorities in the U.K. are … let’s be polite and call it “confused.” The British pound and government bonds rose after the country’s new finance minister overturned nearly all the proposals by Prime Minister Liz Truss. The central bank tightened but then loosened. 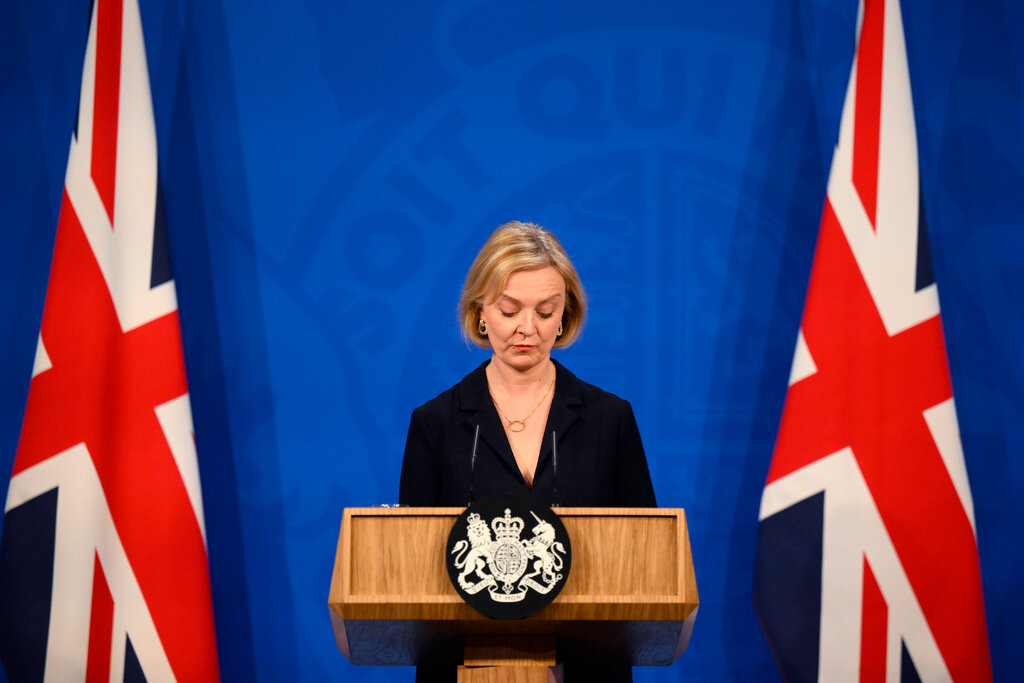 The British pound and government bonds rose after the country’s new finance minister overturned nearly all the proposals by Prime Minister Liz Truss.

It’s pretty darn messy. The prime minister could lose her job just a few weeks after getting it. The market is volatile. Brexit is a ball and chain.

What say you, contrarians? Nibble or stay clear?
Wendy

Having recently worked for a British tech company I’d say stay clear until we get some direction on this mess. There is zero reason to believe it cannot go lower still. Brexit was a self-inflicted wound. Truss is another self-inflicted wound. I want to see the patient stop stabbing themself first.

If you’re going to do it here’s a cheap way:

ER of 9 basis points, vs 50 for the iShares product.

What say you, contrarians? Nibble or stay clear?

Isn‘t the global macro view that the worst is likely to be ahead still?

In the mid stage of a crisis buying UK bonds is not my intent.

Chart of the FLGB etf:

Dynamically compare the performance of up to ten different ticker symbols on the same chart to see the relative strength of a group of stocks, ETFs or funds.

Hmmm. With all the doom and gloom I expected UK stocks to be down a lot more than other international stocks. They’re not, not really.

The UK government has become increasingly unstable. They are required to have elections no more than 5 years apart, though they can advance the election schedule if the ruling party wishes. Blair (Labour) won in 2005. Cameron (Conservative) won in 2010 and 2015. Cameron resigned following the BREXIT vote, and May became PM, in 16. New elections held in 17. May continued as PM, but resigned in March of 19, replaced by Johnson. Another election held in late 19. Johnson continued as PM, until he resigned last month.

According to the polls, the Cons are so overwhelmingly unpopular they would be crushed if they call an election now. The don’t need to have an election for another two years. The rules say they can’t have a no confidence vote about Truss until she has been in office for 12 months, but, apparently, the rules can be ignored.

Apparently, a committee of very elderly and far right party members have a disproportionate influence on who the party selects as party leader, so any replacement for Truss would be cut from the same cloth: shower the rich with money, while shafting everyone else.

Bottom line, the UK is in for more instability, strife, and recession, and the people can’t make their voices heard at the polls, because the Cons will not call an election, because they know they will lose.