$LYLT: Finally set up for a breakout to the upside

I almost traded this a few months ago after Jim did some minimum dd using F/A. Glad I didn’t buy. Dead money for months.

Looking ready to breakout to the upside now. Let me see after I publish the charts if we can find some news.

p.s. I have an ACE Hardware loyalty card from this company. Had this been around in the 80s and 90s, I would have been all over their marketing as it truly is an ingenious way to build store specific branding.

One ACE Hardware here in the Keys and staffed by Trumpers never uses their loyalty program built into their franchise. The other ACE Hardware, owned by two women, is expanding their square footage AND they use their $LYLT card database to market to customers directly for specials just specific to their store. 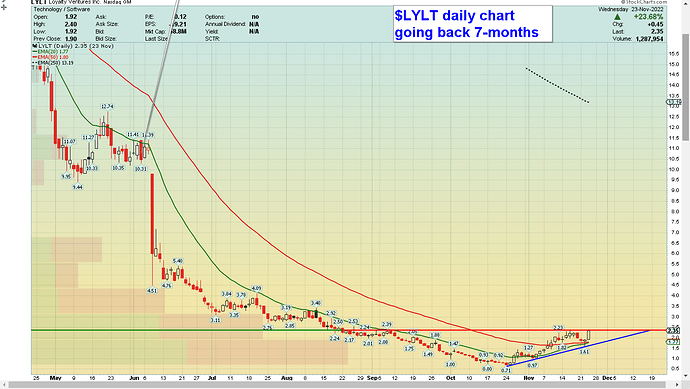 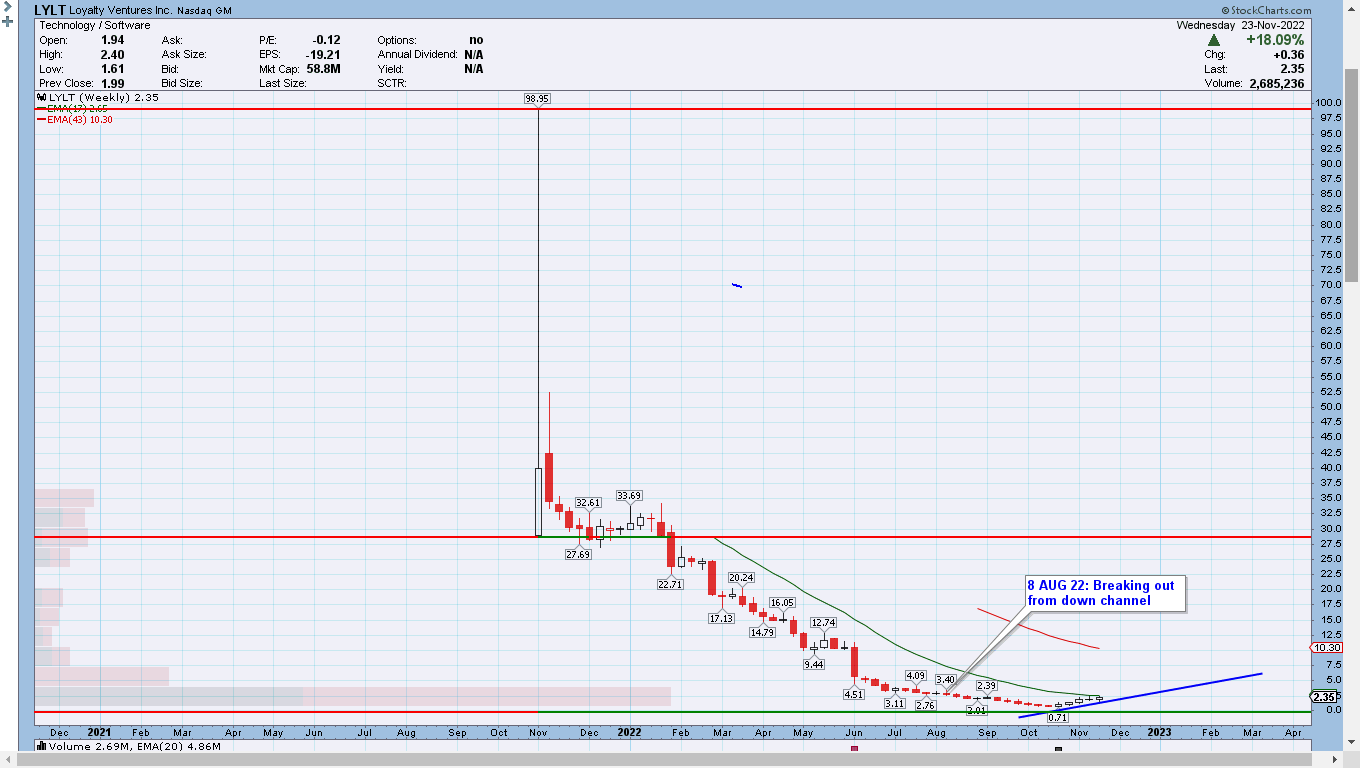 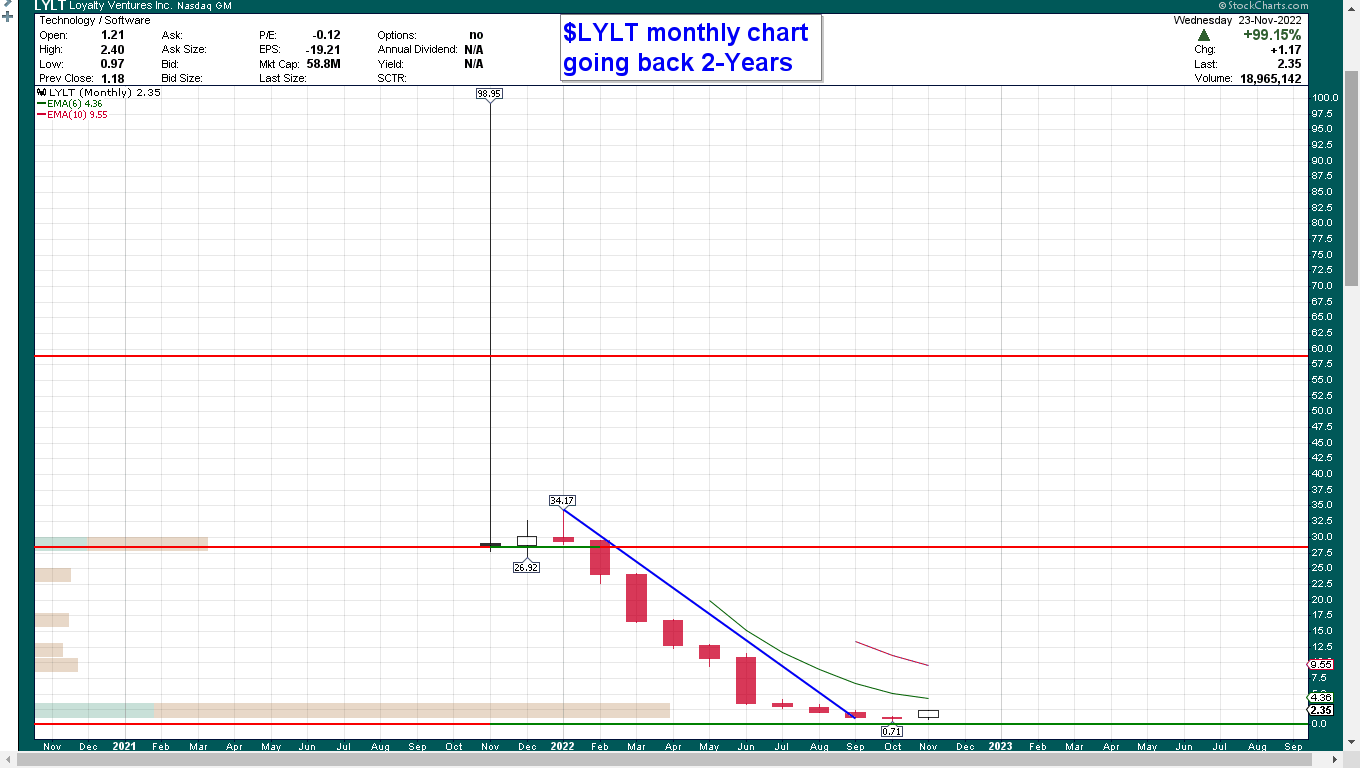 Commenting on the results, Charles Horn, Chief Executive Officer, stated, “Our results in the third quarter are in line with our expectations. AIR MILES reported an increase of approximately 2% in miles issued compared to the third quarter of 2021, with strength in the credit card and fuel verticals partially offset by changes in the grocery category. Importantly, I’m pleased to note that we recently completed contract extensions with three long-time sponsors in our AIR MILES coalition, Bank of Montreal, Shell Canada nationwide, and Metro in Ontario.

“We believe these partnership extensions, with premier companies in large retail sectors, reflect the value the AIR MILES® Reward Program delivers to Canadian consumers. Moreover, this illustrates the positive response to our changes to the AIR MILES Reward Program and fortifies our commitment to enhancing and expanding the coalition. Under AIR MILES’ new direction, we are driving a more flexible model that can better meet the varying and unique needs of each of our clients, something that our collectors have been able to experience first-hand throughout the year.

“BrandLoyalty revenues decreased approximately 2% with essentially breakeven adjusted EBITDA, reflecting continued pressure to this offering related to the effects of the Russian invasion of Ukraine, higher prices, higher interest rates, and consumer uncertainty in Europe that we expect to persist throughout the rest of the year. Europe is the strongest market for our BrandLoyalty campaigns, so we are significantly impacted by the macroeconomic conditions that persist in that region. With that in mind, we have shifted our strategy around our rewards structure and inventory to focus more on relevant rewards rather than aspirational luxuries, while concentrating our rewards lineup on items that better align with current consumer preferences in our key markets. We are optimistic that our combination of global grocer relationships and exclusive supplier partnerships provides a strong foundation for future growth. With our realigned approach we believe that we are well positioned to drive momentum for BrandLoyalty heading into 2023.”

Nibbled on some opening shares today.

We broke out from the horizontal line of resistance AND we had a Bullish Crossover of the 20 x 50 EMAs. 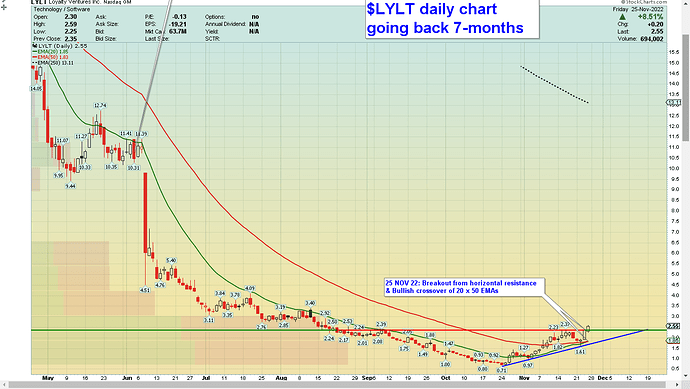 Adding the look at the volume bars. Notice how in the past 5 weeks we’ve had 10 green bars (meaning the close was for a gain) which were above the 90-day moving average line (red line on volume bars), meaning, the bulls are now chasing this stock: 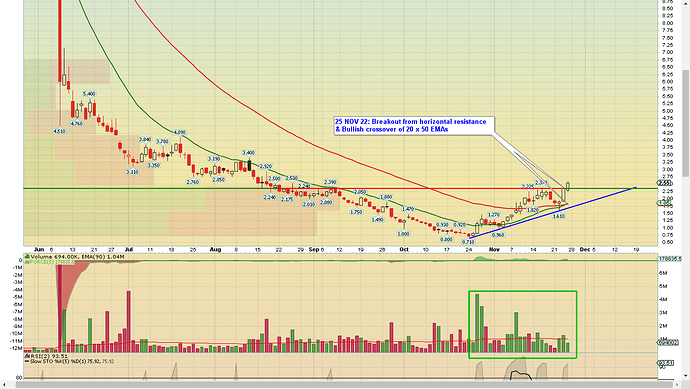 Just sold 90% of this double digit percentage gain winner. The remaining 10% shares are what I will think of as free “zero cost” shares.

Just forget I own them and let them rock and roll, up or down.