` Shares of Facebook parent Meta Platforms Inc. META, -22.52% plunged 23.6% in premarket trading Thursday, in the wake of disappointing third-quarter results, putting them on track to trade below the $100 mark after the opening bell for the first time since February 2016. The implied price decline ahead of the open would wipe out about $81.2 billion worth of market capitalization from the social media giant to about $263.0 billion, which would knock it down by eight notches on the list of most valuable S&P 500 companies, to 21st from 13th. Meta’s stock selloff is on track to be its second-biggest one-day decline, behind just the 26.4% fall on Feb. 3, 2022. The stock’s selloff comes while S&P 500 futures ES00, +0.45% rose 0.5%. 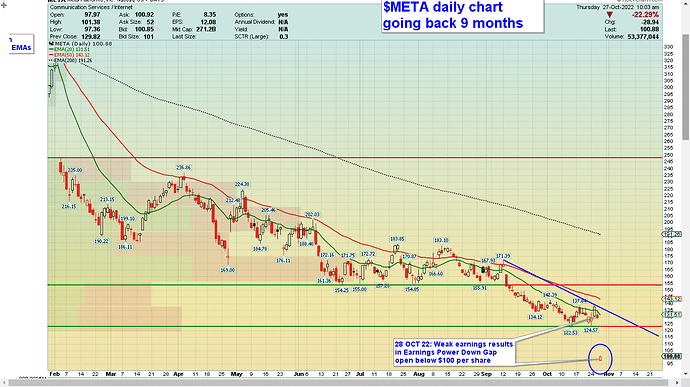 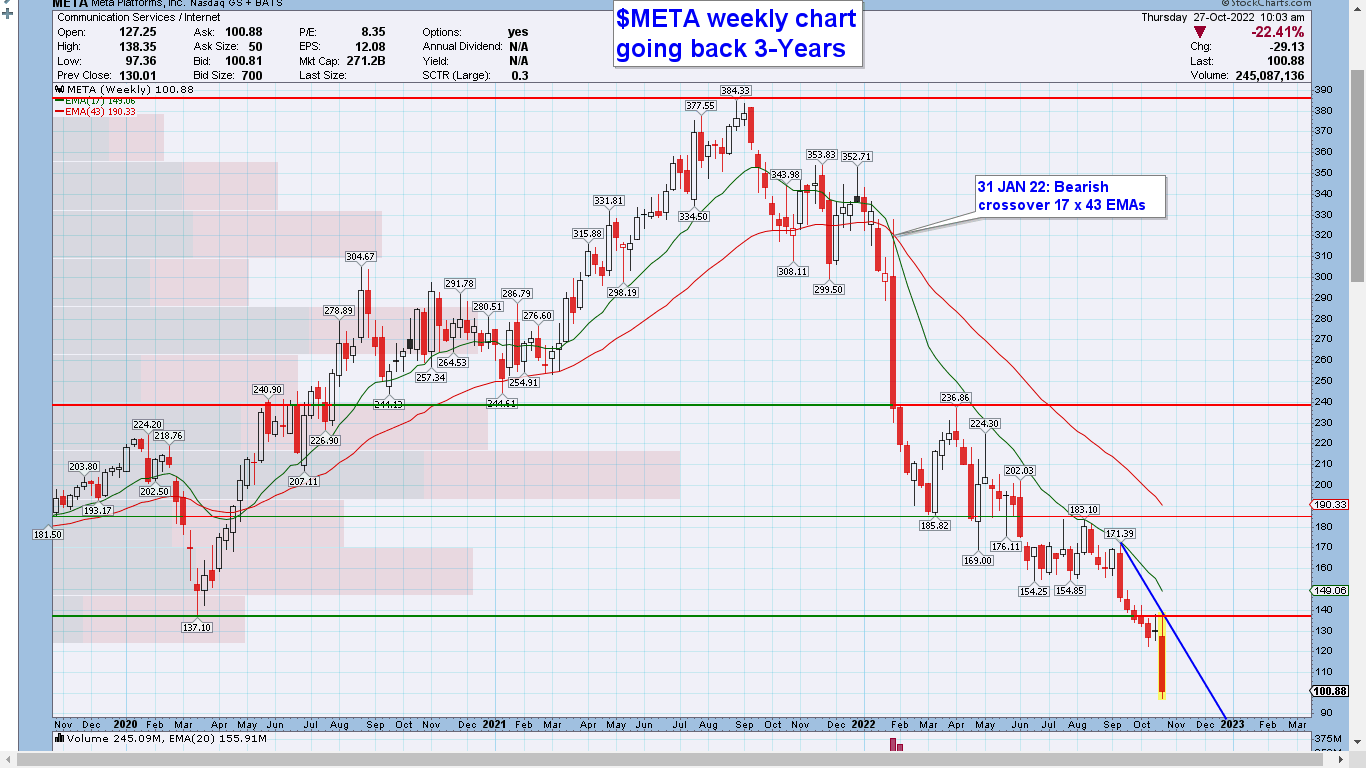 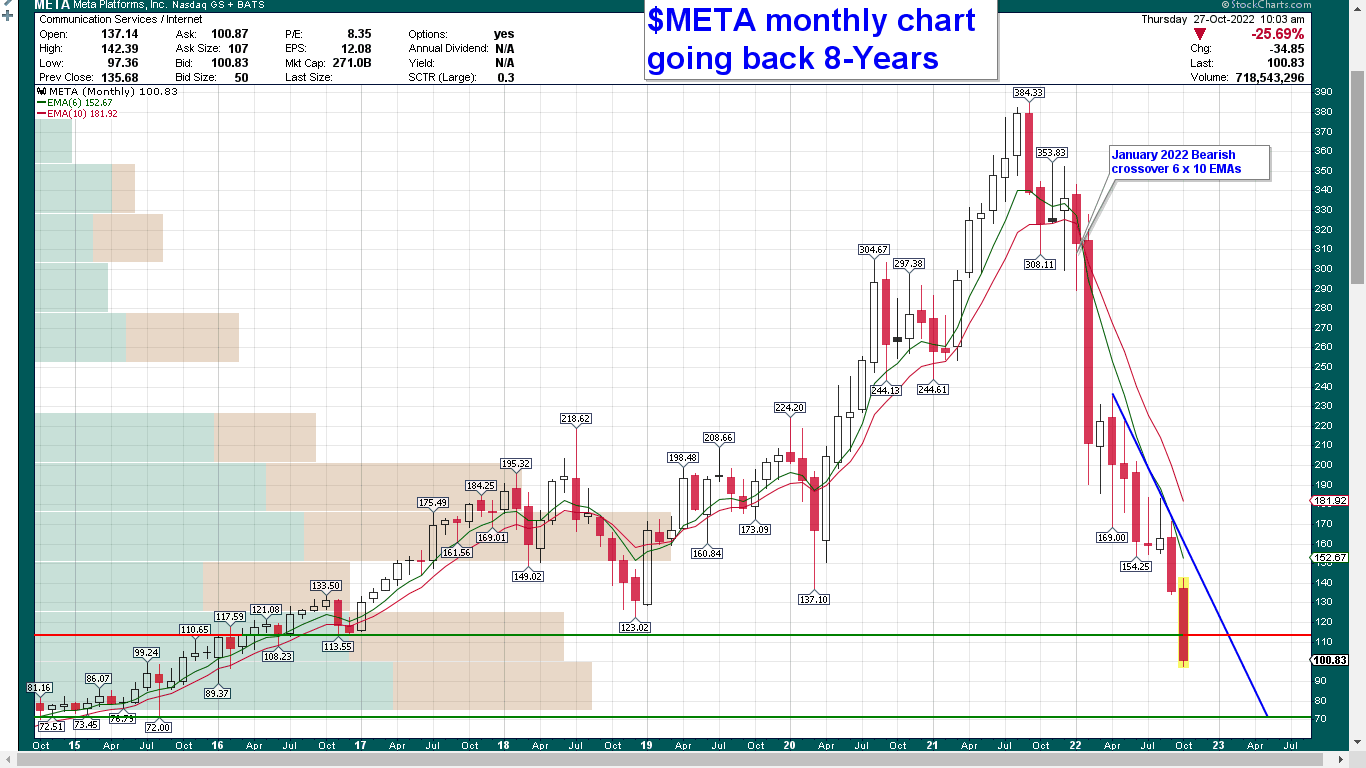 Thanks, I enjoy your updates and charts! Just wanna let you know that there’s a ' in the https://archive.ph/w3sYs link, if you haven’t noticed already.

Thanks for that heads up, Ray.

Here’s another look on the mess at $META 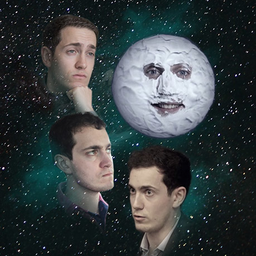 Mark Zuckerberg Is Going To Kill His Company

As I’ve written before, I do not think much of Mark Zuckerberg as a CEO. In the most charitable interpretation of the events of the last ten or so years, he has overseen a company grow from “catch up with what your friends are up to!” to a discordant...

How do you increase active users yet decrease revenue? Very easily: by turning your previously-beloved social networks into social engineering traps. Meta has successfully taken two products that people liked (and the only two products that made them any real money) and, in their desperation, tried to wring more money out of them by annoying their users into submission. The obvious problem is the one they’re currently facing, which is that the only way to make more money is to make the products significantly worse, pi$$ing off users old and new, which will, in turn, mean advertisers reach fewer people, which will make Meta more desperate, which will mean the algorithm will continue to pump irrelevant crap into your feed. This will, eventually, mean that many people will stop using these platforms entirely.

But really, what is the reason to go on Facebook or Instagram these days for the average person? These experiences were never transcendent other than the fact that almost everybody is on Instagram or Facebook. Meta has likely overestimated exactly how powerful the value proposition of these platforms is and underestimated how powerful the effect of interfering with it is too.

We then get to the inevitable conversation around Mark Zuckerberg’s metaverse, one of the stupidest things I have ever seen a company pursue. Reality Labs (the metaverse department of Meta that is tasked with spending and losing as much money as humanly possible) lost $10 billion in 2021 and, “[anticipates] that [their] operating losses will grow significantly year-over-year.” This comes two days after Meta shareholder Altimeter Capital’s CEO Brad Gerstner said that Meta should cap spending on the metaverse at $5bn a year and that “people are confused by what the metaverse even means.”