Youngest drove up for Christmas and of course something arose with his car, which has 230K miles on it. Was barely noticeable at start of drive but 4 hours later, when he got here, was more prominent. He has made one short trip of local traffic, and feels it has gotten increasingly noticeable. He has made numerous calls to our mechanic, straight to voicemail with the holidays.

“Sounds like front right wheel well area is rubbing or creaking when breaking or coasting. Doesn’t seem to happen with acceleration or driving over 40, but it could just be that it is a constant at those speeds and not noticeably cyclical repetition.”

Such generic description makes it hard to even google what this could be, and he has to decide if he takes off to his second half of vacation from here or cancels with his friends and stays until it can get fixed. If it’s something he can YouTube, he may try to fix it himself, if not too difficult to do, and of course will continue trying to reach mechanic. Last time we put a problem out here, he replaced his alternator himself, fixing his last problem.

All suggestions of what to look for very welcome. Old cars are a gift that keep on taking, but it’s still way better than a new(er) car right now.

All suggestions of what to look for very welcome.

Sounds to me like it could be a stuck brake caliper. I think the rubbing noise could be the brake pads are staying closed and are rubbing against the disk that is the front disk brake.

Usually a brake job is what is needed to resolve the issue. Maybe a stuck caliper.

Best of Luck! Keep us posted thanks!
'38Packard

Usually a brake job is what is needed to resolve the issue. Maybe a stuck caliper.

Hopefully this will be under warrantee if that’s the case. We did a brake job before giving him the car. If so, this is the right place to be!

Realized that since Christmas fell on a Sunday, today is likely the mechanics day off, like the stock market

I suggest a search on “symptoms of wheel bearing failure,” or similar. Confirmation can be made pretty easily on a lift.

We did a brake job before giving him the car.

If so, it could be that the caliper has become stuck due to the cold and just needs to be heated up, decompressed and lubricated to free it up.

May be an inexpensive / free fix!
'38Packard

We escaped much of the worst of it, and he was in pouring rain when he noticed. It has been exceedingly cold here since he arrived, which may be why it got worse after being here and sitting idle in the single digit temps we have had.

All this feedback is wonderful. Thanks all!

How have you made out with the weather? I don’t miss winters in your neck of the woods!!

How have you made out with the weather?

We were lucky that we had no damage in the recent BOMB CYCLONE that hit us last week. However, a tree in our neighbor’s back yard came down and shook the ground when it landed. We evaded the snow - just got lots of rain and high winds. DS was able to get into PVD from NYC on Thursday evening via Amtrak - late, but it was OK!

Here’s a picture of that tree that snapped off. I would estimate that it was 3-4 feet in diameter. Fence on right of frame is a 6’ high fence for reference. 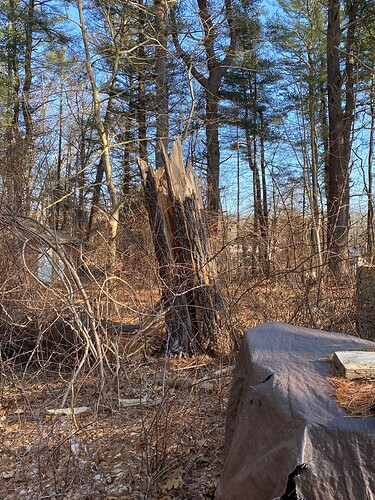 However, a tree in our neighbor’s back yard came down and shook the ground when it landed.

Tall trees and wind make for high anxiety for me, ever since living in a hurricane zone for 8 years, dealing with evacuation worthy hurricanes multiple times a year. There is a price to living in Paradise, IMO. Our house has very few tall trees around it, though the woods further away have had trees come down on our fence. Glad you escaped with minor issues, better yet, your neighbor’s issues.

I agree the description is somewhat generic, so kind of hard to nail down over the internet. I suspect a mechanic would be able to figure it out pretty quickly with a test drive and an inspection on a lift.

Until then, one idea that comes to mind is a build up of ice or snow or mud. Grab a flashlight and take a look around the wheel well for anything that looks out of place. Given the cold weather, something frozen in that area could be the issue. Try to look inside the wheel as well. If you do find something frozen, you might try to remove it or chip it away, but be very careful of the brake lines. You don’t want to damage those. Melting with hot water or a hair dryer is safer if you have to work near the lines.

You could also grab the top of the tire and shake it around pretty good - until the car moves a bit. There shouldn’t be any clunks or noises, and you shouldn’t feel anything through the wheel and tire. Repeat on the sides of the wheel, pushing one side away while pulling the other toward you. Any noises or movement would indicate something for the mechanic to look at.

I’d repeat all of this at all four tires, since it’s sometimes hard to nail down which corner of the car a sound or feeling is coming from.

Thanks Peter. Hopefully we will get a response from our mechanic tomorrow.

So there is this dust flap that keeps brake dust out of the axel grease? All the guy had to do was move it back in place. Apparently they can get knocked into a noise making position if you hit a stick just right.

Son isn’t back yet to confirm all is good, so hopefully that did take care of it.

Thanks for your help!