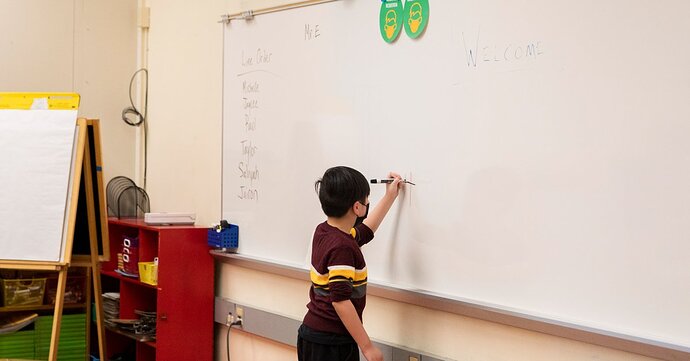 “If left unaddressed, this could alter the trajectories and life opportunities of a whole cohort of young people,” said National Center for Education Statistics official Daniel McGrath.

No state saw improvements in students’ math or reading scores between 2019 and 2022—and a majority of states saw declines, according to a new report released Monday.

The test scores, which continue to paint a bleak picture of student achievement during the pandemic, come from the National Assessment of Educational Progress (NAEP), known as “the Nation’s Report Card” and administered by the U.S. Education Department. The NAEP offers the most comprehensive look at student academic progress since the pandemic disrupted schools.

There were no math improvements in any of the 26 large urban school districts where assessments were given, including New York City, Dallas, Miami, and Los Angeles. The average math score fell five points for fourth-graders and eight points for eighth-graders since 2019—reflecting the largest score declines in more than 30 years, since the NAEP was first administered in 1990.

No state saw improved reading scores at either grade level, though schools operated by the Department of Defense saw an increase in eighth-grade reading scores.

“If left unaddressed, this could alter the trajectories and life opportunities of a whole cohort of young people, potentially reducing their abilities to pursue rewarding and productive careers in mathematics, science, and technology,” said Daniel McGrath, NCES associate commissioner for assessment.

“A once-in-a-generation virus upended our country in so many ways, and our students cannot be the ones who sacrifice the most in the long run,” Cardona told reporters. “We must treat the task of catching our children up with the urgency that this moment demands.”

Let’s see if the US political structure can see its way to increase funding to STEM programs (possibly at the expense of defense spending at the rate of one aircraft carrier per year) in order to help both our youth and ultimately our country.

Doesn’t say a lot for internet and/or home schooling, does it?

It was not good for my grandsons, that’s for sure. But they will catch up, in time.

Doesn’t say a lot for internet and/or home schooling, does it?

It would make sense if the home-school students did better overall because they, AND their parents, would already be in the “you will be doing this at home” mode. The students and parents who got remote learning dumped on them would not be prepared to do or handle the rigors needed to succeed at remote/home-schooling.

The students and parents who got remote learning dumped on them would not be prepared to do or handle the rigors needed to succeed at remote/home-schooling.

That’s kind of my point. For the people trashing teachers, or who say it would be more efficient to put kids in front of screens, or to send money to expel so they can hoe school, or have larger classes, or all the other arguments now have a case study for them, and annoyingly it didn’t turn out well for them.

Like the supply side experiment in Kansas, you have to parse the tea leaves pretty carefully to find a victory. I’m sure there are some, somewhere, but for now changing the basic education system wholesale seems a bad idea.

Home schoolers do modestly better in other times, but that is likely because the families who choose it are of a different breed than those that do not. Foisting that on the general public seems not to be an argument for success.

I’ve talked with several people with younger kids about life during the depths of COVID. They all said it was hell. Trying to keep the kids focused and learning while trying to get their own work done was excruciating. I’m not surprised at all that the results were poor.

Perhaps this will result in a new respect (and appropriate pay) for teachers, who are faced with those kids every day!

Perhaps this will result in a new respect (and appropriate pay) for teachers,

Actually, it could be a simple solution–but NOT one the parents would like. Vote to support school referendums/funding, with the default being mandatory home-schooling.

You pay one way OR you pay the other. Your choice.

In the meantime, TPTB (The Powers That Be) try to eviscerate the funding of public education by having tax revenue diverted to private religious and secular schools as they try to avoid sending their children to “failing” public schools and object to their taxes funding schools that their children are not attending.

BTW, TPTB are not exclusively from one political party or the other - but most of them are far wealthier than the average American.