*NOT* working on the railroad

Seems the railroad labor contract is in a lot of trouble. Management just doesn’t get it. They think money is everything, when workers want to be treated like human beings. Mr Market seems oblivious. All stock futures up about 0.5%.

The Brotherhood of Railroad Signalmen…60.57% voting not to approve.

The BRS vote against ratification follows the Brotherhood of Maintenance of Way Employees (BMWED) which voted not to ratify the tentative deal on October 10.

A rail strike that could cripple the U.S. supply chain and economy could occur as early as November 19. 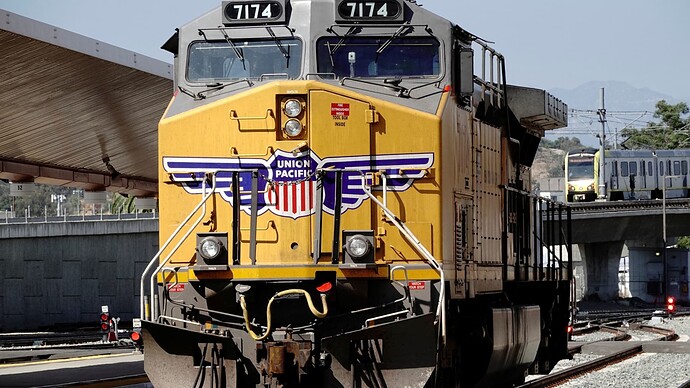 A second rail union, Brotherhood of Railroad Signalmen, voted overwhelmingly to reject a deal with railroad companies needed to avert a nationwide strike.

Manpower shortages and open slots make moving trains difficult if crew members call in sick. You can understand RR resistance to what can become extra days off. Restaffing continues to be a problem.

The worker’s beef is the requirement to always be on call 24/7. They can’t plan anything, because the phone rings and they have to run to the yard to horse a train around. Does any other industry require people always be on call 24/7? What do the airlines do? What do Roads in Europe do? What do steel mills, or refineries, or paper mills, or any sort of 24/7 continuous process do? Does Road management ever ask that question, or do they like treating their employees like machines?

I’ve had a couple part time jobs try to take over my life when I was in college. Need to study for an exam. ring Gotta run to the store. Pile of homework to do. ring Gotta run to the store. Best thing about Radio Shack was that it closed at 9, so I could salvage something of the evening, vs the bowling ally that would keep me tied up past midnight. When I was an RS manager, I never called anyone in if someone else was a no-show, because I know how much I hated being called in.

The Roads pay well, but the folks have other opportunities now, that don’t require this “on call 24/7” nonsense.

Management does what it can get away with…particularly if you are not a white male.

Management needs to pay what people earn and treat people much better. Being a useless boss will sink a corporation given time.

The worker’s beef is the requirement to always be on call 24/7.

You know better than I, but I am told they have a list of qualified employees for the next trip . The crews know when their name is likely to come up in rotation. Then they must be ready to respond. And are on call. Those down the list can relax. But you can see that sickness or other situations could benefit from flexibility. A list of subs?

I have heard that those with low seniority often don’t get called for extended periods. But if many don’t answer the call, it gets complicated running trains. Bumping the no shows from the list does give newer people a chance at steady work.

Being out of town and away from family frequently is another concern. Given a chance for a better job close to home with good benefits can be attractive.

But you can see that sickness or other situations could benefit from flexibility. A list of subs?

That is why I ask the question: how do airlines handle it? How do railroads in Europe handle it? Does Shiny Rail management investigate that, or don’t they care?

how do airlines handle it?

Not enough staff = flight(s) canceled. That has been the airlines’ story for the past 2+ years.

Not enough staff = flight(s) canceled. That has been the airlines’ story for the past 2+ years.

And the airline staff has been howling about all the OT work that has been demanded of them. There have been a couple demonstrations by Delta pilots at Detroit Metro, noting they are on trend to pull more OT this year, than in 18 and 19 combined.

The “JCs” may not notice, but some people would like to spend some small portion of their time doing something other than working like a dog to make the “JC” richer.

Where is JeanDavid when we need him. I think he is an engineer for New Jersey Transit.

Does any other industry require people always be on call 24/7?

I used to manage a 24/7/365 quality lab for a portion of the refinery product stream. The technicians, who worked shifts, would call at any time. They had 8 hour shifts but mine was 24 hours. If an instrument was off line at 3 AM and I couldn’t talk them through it, I had to come in to deal with it. No OT for me, being salaried.

The only way I could get away from the job was to take vacation where there were no phones I could call in for messages, (before cell phones for those of you who have a hard time imagining that,) at which point my boss took over. Motivated us to take some fabulous vacations. They couldn’t reach me while rafting down the Grand Canyon, or in Tahiti where the 800 number was not valid. DH also worked in refining and would also be called in at any time to deal with a production issue. 10-12 hour days 7 days a week were not atypical, particularly during turnarounds which could last 6-8 weeks. During a strike salaried workers would live on site, having to do both their job and the job of a union worker who was on strike. At least we were paid well for that.

I happily took another position ASAP, and quit when we had kids, as even in my new position I was on the road working basically all waking hours one week out of 4. Tough to raise kids that way. That experience firmly contributed to my resolve to retire early. I totally understood how workers went postal. Was probably a good thing I didn’t have a gun at home.

The only way I could get away from the job was to take vacation where there were no phones I could call in for messages,

The head of engineering at the pump seal company, in the 60s and 70s, had a cabin cruiser on Lake Michigan. I don’t know how often Herb took it out, vs sitting in the marina, but it got him away from the phone. He admitted he had the boat to get away from the phone. If he was home, customers and field sales people were calling constantly about their problems.

Now that cell phones are readily available, and relatively cheap, I wonder if bosses demand employees, like the Railroad staff, keep that phone welded to them 24/7, so the boss can demand they come running to the yard at any time of day or night. I have read that, when Sergio Marchionne was running Fiat-Chrysler, he was prone to calling his underlings at any time of day or night, and they understood, if they wanted to keep their job, they better answer.