"DOW will install advanced nuclear reactors at one of its Gulf Coast sites to provide low carbon power and process heat for its chemicals production.

"We Dow signed a letter of intent with reactor developer X-energy, and plans to buy a minority stake in the company. The plan is to deploy X-energy’s Xe-100 high-temperature gas-cooled reactor technology at one of Dow’s Gulf Coast complexes, with operations expected to begin by 2030…

“The Xe-100 is an 80 MWe reactor design that is optimised to operate as a four-unit plant, delivering 320 MW of electric or 200 MW of heat. The pebble-bed reactor works like a gum-ball machine where new fuel pebbles the size of billiard balls are fed into the top of the reactor to refresh the older ones ejected from the bottom. Each pebble remains in the core for around three years and circulated through up to six times to achieve full burnup. Helium is cycled through the reactor to extract the heat into a steam generator.”
https://www.captainsjournal.com/2022/10/27/dow-goes-nuclear-chemical-firm-will-install-reactors-at-us-chemicals-complex/

I see some of the pros, but I have no accurate idea yet of the cons.

That quote above from the link provided is poorly worded. Each Xe-100 reactor can provide 80 MW of electricity or 200 MW of heat. Operating as a four-unit plant, it would be 320 MW electric or 800 MW of heat. It makes no sense for the electric power rating to be a higher number than the thermal output of the reactor. 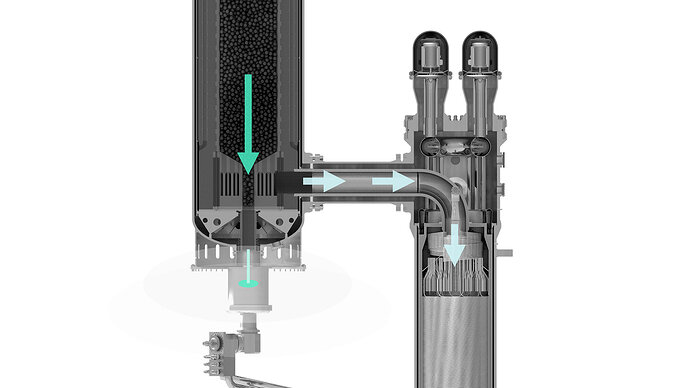 We’re focused on Gen-IV High-Temperature Gas-cooled Reactors (HTGR) as the technology of choice, with advantages in sustainability, economics, reliability and safety.

Some of the advantages:

Some of the disadvantages:

China recently started up a high temperature gas plant similar to this Xe-100 concept, so they have experience in building and operating these new plants.

The demonstration High Temperature Gas-Cooled Reactor - Pebble-bed Module at the Shidaowan site in Shandong province of China has been connected to the grid, the partners in the consortium building the plant have announced.

Deja Vu all over again. Over forty years ago, Dow Chemical and Consumer’s Power started building a nuke near Midland, MI, with the intent that the nuke would provide power and process steam to the Dow plant, and power for the grid.

The best laid plans? Or lip service? The latter with the engineers going along for the former.

Co-generation has been around for eons. Even coal fired power plants can do this. Make high pressure steam, make electricity while reducing pressure by turning turbines, and then supply low pressure steam for heating requirements. Most chemical plants use lots of steam. Steam distribution systems are common in many cities and many college campuses. Its cheaper to generate steam (or chilled water) in a central plant and circulate than to have complete HVAC systems in each building.

The new aspect is nuclear. Expect Dow Chemical to be on top of the technology. Recall when natural gas looked like it would be short in the US, they built an LNG receiving terminal to serve their Freeport plant. It is now used for export. They are well managed risk takers and willing to invest.

Are they still making Agent Orange?

I think the answer is no. They merged with Dupont a few years ago, did the streets and alleys routine and reformed. Agent Orange is 2,3,5-T, trichlorophenoxyacetic acid, a powerful brush killer (aka herbicide). Most of their chlorine businesses went to Olin some years ago. Not sure about 2,4,5-T. I suspect no one makes it these days. I think there’s a problem with dioxin contamination.