According to the video, carbon free red hydrogen can be produced by a novel nuclear power plant design. Maybe that’s why Toyota is banking on hydrogen fuel cells instead of on batteries. Even if it works it will be at least a decade behind BEVs.

The video gets a few things wrong about nuclear power, but overall it shows how nuclear can be used to produce hydrogen. I had a few problems with the narrator constantly emphasizing Japan, as if Japan is the only country working on this.

China recently started up a 200 MW demonstration plant using this high temperature gas technology, although I believe the plant only produces electricity.

The demonstration High Temperature Gas-Cooled Reactor - Pebble-bed Module at the Shidaowan site in Shandong province of China has been connected to the grid, the partners in the consortium building the plant have announced.

Here in the US, X-Energy is developing reactors using TRISO fuel, as described in the following thread from earlier this month.

Dow goes nuclear: chemical firm will install reactors at US chemicals complex "DOW will install advanced nuclear reactors at one of its Gulf Coast sites to provide low carbon power and process heat for its chemicals production. "We Dow signed a letter of intent with reactor developer X-energy, and plans to buy a minority stake in the company. The plan is to deploy X-energy’s Xe-100 high-temperature gas-cooled reactor technology at one of Dow’s Gulf Coast complexes, with operations expected to …

The TRISO-X Fuel Fabrication Facility - or TF3 - in Oak Ridge, Tennessee, will be North America's first commercial-scale advanced nuclear fuel facility and is set to be commissioned and operational by 2025.

Back to the YouTube video, I like the idea of the Iodine-Sulfur process for producing hydrogen. I can see it being more efficient than electrolysis.

I don’t know if hydrogen is going to become a big deal in the future, but if it needs to be made cleanly, then nuclear power is the best way to do it. Large scale chemical plants generally want to run 24 hours a day to be the most efficient. They don’t want to shut down if the sun isn’t shining or if the wind dies down.

The Department of Energy is working with four US nuclear power plants to produce hydrogen in separate test projects. The four plants are: Nine Mile Point in New York, Davis-Besse in Ohio, Prairie Island in Minnesota, and Palo Verde in Arizona. The plants will use electrolysis, either low or high-temperature, as the technology. 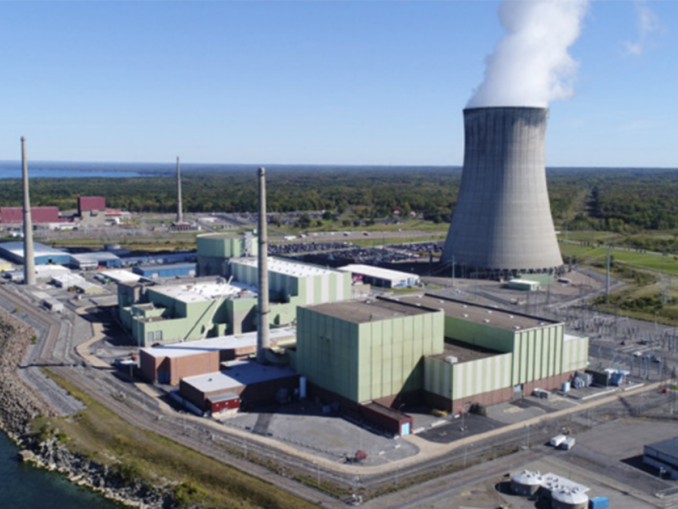 U.S. nuclear power plants are being leveraged to help lower the cost and scale-up the production of clean hydrogen.

Monsanto developed Prism technology to recover hydrogen from waste streams. That implies that any process that produces hydrogen in an equilibrium (as in the case of ammonia) can be used to capture the hydrogen and drive the equilibrium.

I would expect water to dissociate to hydrogen and oxygen at very high temps. Trapping the hydrogen could drive the process. But the temps involved require special technologies. Someone must be working on it.

Electrolysis should work but people think there are more efficient ways to make hydrogen.

Electrolysis should work but people think there are more efficient ways to make hydrogen.

Probably. On the other hand, could electrolysis be used as a way to use up (basically storing) excess electric production?

For example, rather than figure out how to vary the production coming out of a nuclear plant, run it at a constant rate, then when it’s producing more than the demand, send the excess to a hydrolysis plant. Or do the same for wind production. Rather than putting the brakes on unneeded windmills, let them run and use the excess to product hydrogen. (Charging batteries or pumping water up hill or heating salt beds are other ways to deal with excess power.)

We’re constantly stuck in the mode of figuring out how to create dispatchable power on the grid to deal with the difference between baseline production and current demand. Why not find uses for the excess power instead? You can then run more base load plants, which are typically less expensive to operate than peaker plants.

More developments on the idea of using nuclear power to produce hydrogen.

The NuScale small modular reactor design is furthest along in the NRC licensing process for these smaller SMR style plants. The 50 MWe reactor is close to getting final NRC design certification, with a later upgrade to a 77 MW version planned.

Since the NuScale SMR is a pressurized water reactor, operating at normal temperatures and pressures, and using standard UO2 fuel, the hydrogen production technology will most likely be electrolysis. The first link above mentions solid oxide electrolysis.