OT: Buddy, can you spare a dime?

I’m used to handling a large variety of foreign currency when we travel. I even have definite opinions about how we could improve ours by copying the good ideas of others. Our $1 coin, for example, could actually become popular if it was the size of a British pound (not talking about its value

) which is like three US nickels taped together or our paper currency being “plastic” like those of Canada or Switzerland - with different colors and sizes for each denomination making identifying the banknotes easier for foreigners and the blind.

I am also constantly scanning my change, both here and abroad, to make sure I don’t end up with “look-alikes” from the Philippines, Peru or Ukraine (which can happen in NY as easily as abroad).

So, today, I reached into my pocket to pay for some small items and, to be honest, I didn’t recognize the quarters and nickels I pulled out. Sure, they were obviously the right size, but everything had a different picture on the coin.

What makes matters worse is that the only excuse for the US to have any coins besides a quarter and a $1 coin is tradition and the inability for government to admit that we’ve had about 1,200% inflation since 1972 (which explains why the 5 and 10 cent stores have become $1 and up [generally way up] stores) and the smaller 1, 5 and ten cent coins are virtually worthless from a practical standpoint and cost more to make and handle than they are worth.

Paper money security has been an issue here, microprinting, color shifting inks, all help, Australia I believe has some clear windows in most bills… Counterfeiting is still a problem, worldwide…

Same problem in Dublin this August. Took me a few transactions to begin to see the coins for what they are 2 and 1 euro coins.

…and the inability for government to admit that we’ve had about 1,200% inflation since 1972

We’ve watched this argument play out numerous times (does the government lie about inflation?), so the way I look at it:

Interesting factoid:
After we got married, my wife bought me a birthday gift to help me out as I was taking physics in night school and was complaining I couldn’t finish the exams in the time allocated. She bought me a top-of-the-line Texas Instruments calculator which not only had ±/*, but also took square roots! It cost her $117 which, proportional to her salary back then, was similar to what a top-of-the-line PC would cost a secretary today.

The real argument after it is all said and done is what percentage of the population at retirement age is set financially to retire. That is the goal for most people. Even if they give up on it decades earlier because of their prospects.

It has never been good for most people in the US. Inflation always seems bad in that vein.

While I agree with you about the silliness of small denomination change, I’m not sure eliminating the nickel and dime would be that useful.

Whenever prices need to increase, they would increase by at least 25 cents. I think that would be inflationary, especially in food items. I don’t think eliminating the penny (sorry, Abe) would have as big of an impact. We eliminated the half-cent coin in 1857. It’s time.

Besides, the majority of payments are with credit cards.

Anecdotally, I carry some bills around with me, but they mostly collect dust in my wallet. The minute I get any change, it goes into a change jar at home (actually a 12 gallon jar I got at Corning Glass years ago).

Whenever prices need to increase, they would increase by at least 25 cents.

That wouldn’t work because after sales tax the total would again not be a multiple of 25 cents, so prices should remain as they are.

Just the final total would be rounded up or down to a multiple of 25 cents.

Well, we seem to be sidetracked from our physical currency to the effects of inflation - oh well

While the ability to maintain a standard of living during retirement if inflation increases is important, it is only because they either depend on a fixed income (whether pension/social security/bonds, CD’s), have been a member of the “working poor”, have squandered what they have earned, rather than saved, have followed inappropriate financial advice or are simply poor that they are ill prepared.

That said, it is while they are still working that they have to pay careful attention to what is happening and, yes, act counter to what the government hopes, by curtailing unnecessary spending thereby, as a group, accelerating us towards a recession.

While it is not a great idea to catch falling knives, one constant is that natural resources are always in style once the economy picks up.

The world’s major miners seem to be at bargain prices today and their natural resource holdings will store inflated value.

Because of Russia’s using gold to finance its current adventures, the price of the metal has dropped significantly. Part of this is because, while we are experiencing inflation, the USD is rising against other currencies. If the carry trade on the USD unwinds, gold should benefit.

It is important to realize that, while we are experiencing inflation, the UK and EU are experiencing even higher levels. This is likely to expand the spread in comparative valuations (when evaluated in terms of USD) between similar European equities and their US parallels. Similarly, emerging market equities are still selling at substantial discounts to US ones. For those who buy bonds, (hedged or USD denominated) emerging market government bonds are frequently paying premium yields compared to US junk bonds (but require due diligence like any other financial investment).

I could have sworn I replied to a thread about physical currency, but I don’t see my reply here, so:

If you start withdrawing denominations of currency, even denominations so small they can’t buy anything anymore, the nutters will come flying out of the woodwork, with their hair on fire, screaming that “the gummit is robbing us”.

So, plan Steve: do what other banana republic do: replace old Bux with new Bux, at a 1 for 10 ratio. Then a dime can buy what costs a dollar now. Everyone gets to keep the denominations they are comfortable with, and the prices they pay would be close to what they paid 50 years ago, when they imagine Shiny-land was run the way they want it run.

When monetary policy leans into deflation or inflation metals do better. But leaning into appreciating the dollar will be longer term for the industrialists. That is not good for metals, energy or other commodity inputs.

The EUR will begin to join the USD and the ECB raises rates. There are only those two parties at the table with Japan, SK, Australia, and CA rising, add in the UK as such…when they get their act together. But all acts are going down the tubes now.

Currency values are relative things. If all currencies rise, they stay the same and there is no change. I remember back around 2009-2010 when the Australian dollar rose to parity with the US dollar, gold was also rising - but only in terms of USD. In terms of the AUD, it was flat.

We, in the US, tend to look at things through green-colored glasses, but from the perspective of someone sitting in another café - whether it be in Sydney, London, Zurich, Brussels or Tokyo - each may be seeing a different scene playing out.

We are talking here about the US having 1,200% inflation over a period of five decides. I remember Brazil, back in the 1980’s, when over a period of two years they cycled through the Cruzado, Cruzeiro and the Real and inflation was running 1,200% per year. The opposite was true at the end of the 1990’s when the money in circulation in Argentina suddenly evaporated as they removed the peg of the Peso to the USD.

Just as, in global terms, the US has very few truly poor people, our jousting at deflation and inflation, while extreme from our point of view are minor compared to how badly others have suffered from those maladies. My fear is not for the US, but for the UK and EU as the coming year unfolds - as the rising USD is simply a confirmation that those currencies are currently declining.

There can be an appreciation in the EUR and USD with a decline in the nominal price of gold in each currency. We are in a longer term bear market for gold. We just had massive monetary stimulus from the central bankers in 2020 and 21 yet gold really did not rally. Now the FED is taking some of the monetary supply out of the economy there is no reason for a rally in gold.

A moderate sedan that wouldn’t be street legal today as a new car.
Maybe would get a 1 star crash rating.
No air bags.
But also, no GPS or Bluetooth!

Maybe would get a 1 star crash rating.

And … ultra tiny! I wouldn’t call it a sedan … a sub-compact coupe? The rear seats had practically no leg room.

And … hardly any storage space. On the plus side they were cheap, somewhat reliable, easy to repair, and got decent traction in bad conditions because the engine was over the rear wheels, and got decent gas mileage, for the day.

I do fondly remember riding around in my sister’s Bug though, her first car. That would have been 1980.

I have traveled as a little guy with my grandmother, my mother and her sister and a bunch of us kids on laps of laps from Dublin to the West Coast of Ireland in a Beetle. Back then that took five hours. We fit in there like it was a clown car.

Going all out here… but I have to admit, I remember being 2-3 years old and riding in the small compartment BEHIND the rear seat! I actually have a picture of our family VW (that’s me the youngest one) and you can see how I could have fit back there! 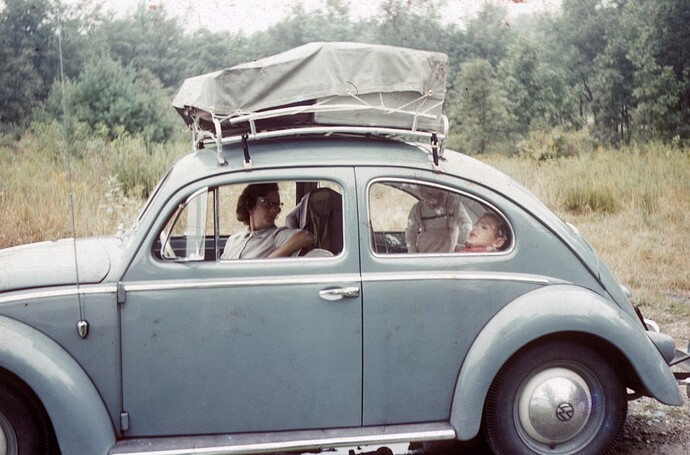 That’s how we vacationed in 1959. Dad (behind the camera), Mom, Big bro and me. Tent and camping gear and luggage on the VW roof rack… OMG.